Two teams with winning records and both coming off losses.

While the Knights didn't come up short in the effort and courage departments against Souths, they didn't get it done on the scoreboard, much to the chagrin of their vocal supporters. They certainly had their chances and it goes without saying it might've been a different story if they could've kicked a goal and if Ken Sio hadn't botched a straightforward try.

On the plus side, the Knights drew a crowd of almost 23,000 to a 6pm Friday game and have been allocated the same time slot for this week's Indigenous Round home clash with Penrith.

The Panthers have flirted with disaster all season with their slow starts and last week they dug themselves too big a hole when they trailed the Cowboys 20-0 just before half-time. They fought back gamely, especially after the setback of losing Trent Merrin to a nasty finger injury in the pre-game warm-up, but this time they couldn't get out of jail.

Injured halfback Nathan Cleary is hoping his recovery is ahead of schedule but the club won't rush his return, while Merrin could miss up to four games and leaves big shoes to fill.

Key match-up: He has been in the NRL since 2005, playing four games for NSW in 2008 and '09. He played with the Panthers for three years before moving to Brisbane and spending six seasons with the Broncos. A former halfback, Peter Wallace returned to Penrith as a hooker in 2014 and has become a dependable member of his team. But rightly or wrongly, the 32-year-old has never been truly appreciated. He is up against 27-year-old Slade Griffin on Friday and the injury-weakened Panthers will be banking on a typically busy performance from Wallace.

For the Knights to win: They've shown they can score tries and have a brilliant young playmaker in fullback Kalyn Ponga, but the Knights have to iron out a few defensive issues or their top eight prospects will nosedive. The Panthers are vulnerable right now, especially if Newcastle can limit James Maloney's impact on the game.

For the Panthers to win: Broken record it may be, but Penrith need a reminder of what it feels like to come out firing. They did it against the Cowboys in round four and cruised to a comfortable victory, but in almost every other game they have started slowly. It took a 20-0 deficit last week for them to wake up but it was too big a margin to overcome. Let's see if they learned anything.

Knights stat attack: The Knights are aiming to avoid the club's fourth straight wooden spoon. Newcastle's only other last-place finish was in 2005. Andrew Johns is the Knights' all-time leading scorer (2176 points) but not their most capped player. That honour goes to former captain Danny Buderus (257 games).

Panthers stat attack: The Panthers have the dubious honour of being the NRL's most penalised team in 2018 (91), but not a single Penrith player is among the top five most penalised individuals. James Maloney continues to lead the competition in missed tackles (65).

And another thing: Unfortunately Nathan Cleary's knee injury robs us of a meeting of two of the game's best young players. Cleary v Ponga is worth the price of admission on its own, but we'll have to wait until the round 23 game between the Panthers and Knights at Penrith on August 18. Hopefully they're both available.

The Knights are 1-17, with Brock Lamb returning at halfback and Jack Cogger dropped. Josh King has been called up at prop to replace Jacob Lillyman, while Luke Yates and Danny Levi will come off the bench. Mitch Barnett and Aidan Guerra swap between second row and lock. Jamie Buhrer and Cory Denniss were the last players trimmed from the squad an hour before kick-off.

The Panthers are 1-17, with Trent Merrin cleared to start at prop despite suffering a compound dislocation of his finger last week. Moses Leota (pec, eight weeks) and Jack Hetherington (suspension, one week) are sidelined. Wayde Egan and Nick Lui-Toso were cut an hour before kick-off, while Tom Eisenhuth and Tyrone May were omitted from the initial squad on Thursday.

Steve Turner's prediction: Both sides come into this fixture off the back of losses. The Knights have been surprise packets in 2018, while the Panthers have shown they are a genuine finals contender. Newcastle have young gun Kalyn Ponga, but they aren't getting enough out of their halves. The Panthers are down on backs, but their forward pack is very impressive and this is where it will be won on Friday night. Tip: Panthers by 8 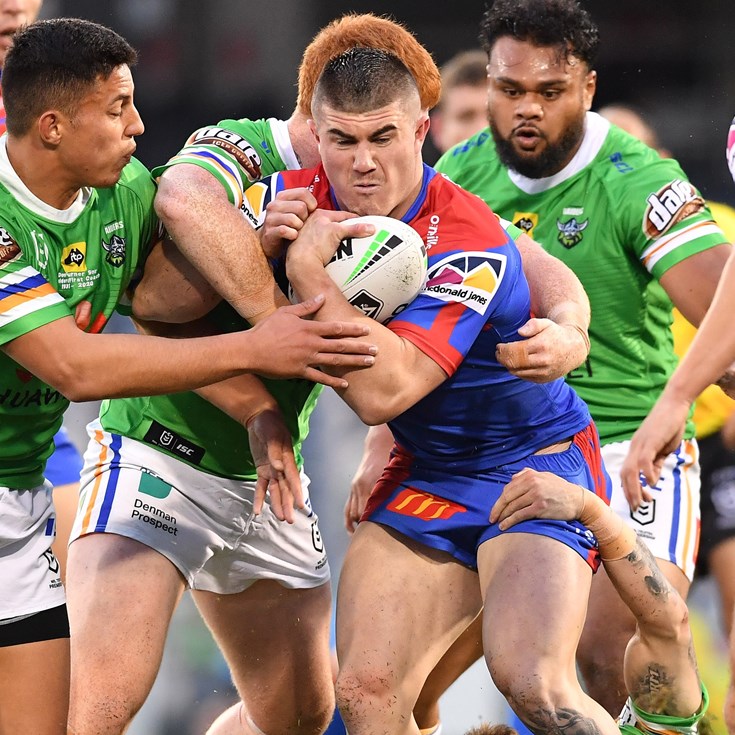 Peachey punctuates Indigenous Round with try