Every chance this could be the game of the round, between two teams who like to move the ball around and are playing with loads of confidence.

The Warriors have defied the odds all season, soldiering on in the absence of key players to have eight wins from 11 games. This week they are expected to welcome back fullback and captain Roger Tuivasa-Sheck after he missed last week's road win over Parramatta, while star halfback Shaun Johnson could return after sitting out two games with an ankle injury.

Like the Warriors, the Rabbitohs have exceeded expectations thus far and played like a top-four side for most of the season. After making a loud statement with an impressive round 10 defeat of the competition-leading Dragons, last week they scraped home against a desperate Cowboys side for their seventh win of the season.

After a long road trip to Townsville and back, recovery will be a big focus for the Bunnies in the few days they have to prepare before flying to Auckland on Friday.

This is a big game for both teams and should feature some heavy collisions in the forwards.

Key match-up: This is the final test for Rabbitohs hooker Damien Cook to stake his claim for the NSW No.9 jersey – and what a test it will be against the rejuvenated Issac Luke. The man nicknamed 'Bully' is one of the game's friendliest blokes but he's also one of its most competitive, and you can bet the former Souths fan favourite will be relishing his head to head clash with Cook.

For the Warriors to win: They lead the NRL in offloads (165) and have the ability to cause all kinds of problems if the Rabbitohs aren't on the defensive game. The Warriors expect to have Roger Tuivasa-Sheck and Shaun Johnson back and that could spell trouble for the Bunnies.

For the Rabbitohs to win: Second in the NRL in points scored, the Rabbitohs have transformed themselves from a predictable attacking team last year to one that strikes from anywhere on the field. They rely on rugby league's oldest game plan - brute force up front, skill in the backs – and if ain't broke don't fix it.

Warriors stat attack: If Johnson is cleared to make his return from an ankle injury he will chalk up his 150th NRL appearance. The 27-year-old is in his eighth season with the Warriors after progressing through the club's junior ranks.

Rabbitohs stat attack: Damien Cook is the NRL's leading tackler (466) alongside Jake Friend (466) and also tops the dummy-half runs list (63). Cody Walker has the most handling errors (11) of any NRL player.

And another thing: Some called it a fluke, others said it was robbery. Regardless of what footy followers thought of the Rabbitohs beating the Cowboys last week on an after-the-siren penalty goal, plenty of Souths fans don't mind admitting it was probably a game the Bunnies would've let slip last season. But despite squandering a handy lead, they played the full 80 minutes and made their own luck on the final play in regulation time to claim an important victory.

Karl Lawton is the only game-day change for the Warriors, moving from the reserves to the bench in place of Isaiah Papali'i. Fullback Roger Tuivasa-Sheck returns at fullback after sitting out last week due to the birth of his child. Mason Lino is out, prompting coach Stephen Kearney to push Blake Green to halfback and Peta Hiku from centre to five-eighth. Gerard Beale will start in the centres in Hiku's spot. Albert Vete was omitted on Friday night and Anthony Gelling was cut an hour before kick-off.

Alex Johnston (hamstring) is replaced at fullback by skipper Greg Inglis, with utility Adam Doueihi coming into the three-quarter line. Robert Jennings has returned to the starting side on the wing with Hymel Hunt dropping to the bench. Braidon Burns and Kyle Turner were trimmed from the squad an hour before kick-off, while Robbie Farah and Mark Nicholls were omitted on Friday night.

Steve Turner's prediction: The Warriors were impressive last weekend without Shaun Johnson and Roger Tuivasa-Sheck. Issac Luke was the star in the gutsy win, but they will need to go to another level this weekend against the Rabbitohs. South Sydney have won four of the past five matches and will be hoping Alex Johnston and Sam Burgess recover in time to head over to New Zealand.

Both men picked up injuries in their win over the Cowboys, but they're are positive signs for the Bunnies who are playing an entertaining brand of football under Anthony Seibold. Adam Reynolds, Damien Cook and Cody Walker have been superb this year and it will be up to these three men on Saturday night if the Rabbitohs are to register their eighth win of the season. 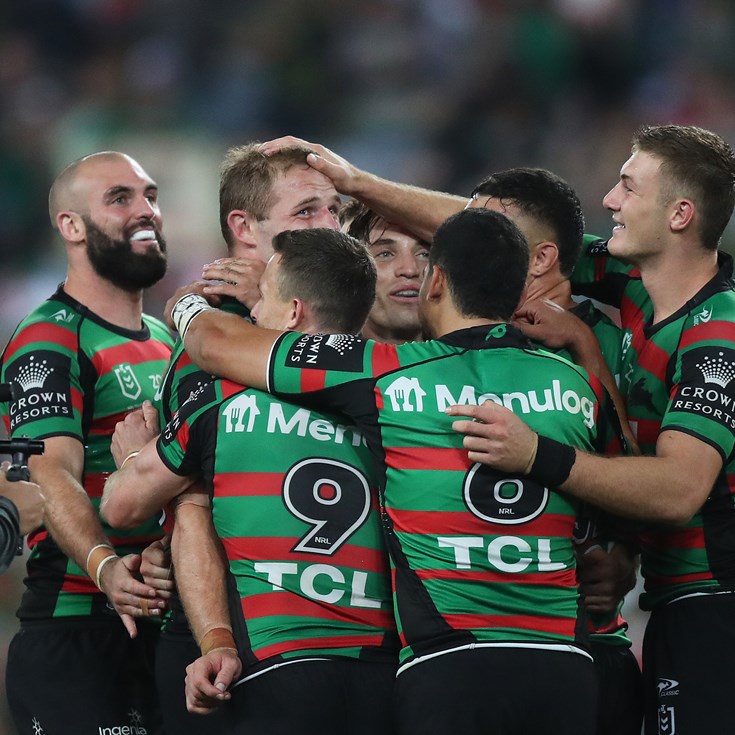