Matt Moylan left it late to hit peak form but he's given NSW State of Origin selectors food for future thought with a dominant display in Cronulla's 48-10 rout of the Knights in Newcastle on Sunday.

The five-eighth starred as the Cronulla Sharks extended their winning run in the Telstra Premiership to six matches.

Despite a strong home crowd for the Beanie for Brain Cancer round, which shared the same name as the Knights home ground for the week, the Novocastrians were on the back foot early.

An early penalty led to a third-minute Sharks try courtesy of Jesse Ramien.

The Sharks had no problem converting their chances into points as Valentine Holmes strolled over for the visitors' second try.

The Knights suffered a blow midway through the first half, losing star fullback Kayln Ponga for a concussion test after a tackle from Luke Lewis. He passed the HIA and returned to the game.

The Sharks were in a feeding frenzy, and it was not long before the lead was out to 16 points, with a Matt Prior pass putting Jaylen Brailey over next to the posts.

Knights supporters finally had something to cheer about when Jack Cogger putting Lachlan Fitzgibbon over for his eighth try in as many games at the ground.

But the joy was short-lived, with Dugan putting the Sharks back out to a 16-point lead heading into the break.

The visitors were quick to pick up where they left off on the second with Edrick Lee crossing just three minutes after the break.

There was just no relief for the struggling Newcastle, with first Luke Lewis crossing followed by tries to Holmes and Ramien, which capped off doubles for the pair.

The Sharks were in cruise control, cutting through the soft Knights defence at will taking the kickoff return to just 10 metres out from the Newcastle line. Only a mistake let the home side off the hook.

But with 10 minutes to go and the Sharks having made 38 tackle breaks, Holmes crossed to complete his hat-trick.

Chad Townsend unlucky not to have taken his side to the half-century, with his conversion attempt hitting both uprights and the crossbar before bouncing.

News and notes: Ponga left for HIA in the 25th minute, which he returned from later in the match ... Valentine Holmes has scored 12 tries in six matches against the Knights ... The Sharks have now beat the Knights seven times in a row ... 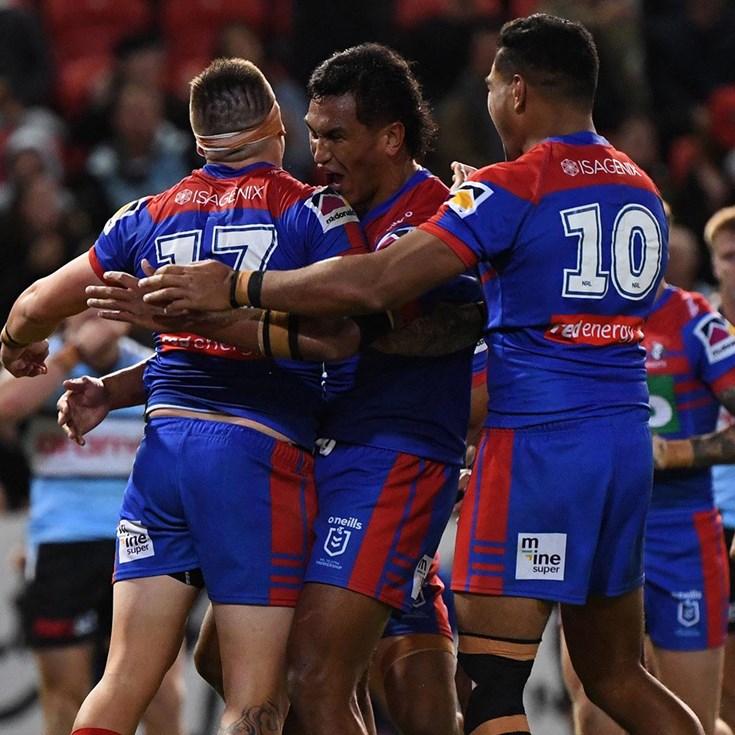