Maroons winger Valentine Holmes knows how dangerous the most explosive Blues backline for years can be – yet their defensive inexperience at Origin level can be exploited by the man inside him, Greg Inglis.

The exciting potential of the opposing three-quarter lines has perhaps never been seen in the Holden State of Origin arena, with six of the eight outside backs being indigenous (Inglis, Dane Gagai, Will Chambers for Queensland; James Roberts, Latrell Mitchell and Josh Ado-Carr for NSW) and all players possessing breathtaking skills and pace.

Of the Blues’ debutants, "Jimmy the Jet" Roberts and Addo-Carr are considered the fastest players in the Telstra Premiership. Mitchell is potentially the Mal Meninga of his era with his size, skill and pace while Tom Trbojevic also has size, class and maturity beyond their years. Yet none have played in the interstate cauldron.

And Holmes says for all their natural brilliance, the four Blues debutants will face the toughest test at Origin level at the defensive end.

"Obviously with the ball they are going to be very dangerous so we need to be on our guard and be aware of what they can do,” said Holmes before his third match for Queensland.

"But defensively they haven’t played outside each other, coming from different clubs, so it is going to be a challenge for them."

Slater: I'm not in the clear yet

And he points to Inglis, whose 30 Origin games is almost double the aggregate of the other seven three-quarters (Holmes 2; Chambers 7; Gagai 7; Roberts, Mitchell, Trbojevic, Ado-Carr 0), as the man to give NSW their biggest headache.

"You look at their backline and look at ours – we still have GI, and Chambers who have played in multiple big occasions," Holmes said.

"Everyone is saying how good their back five are. But we have someone like GI, who is the captain and we all look up to him and think he is going to do a good job. I’m not too fussed about them; we’ll handle them fine."

And if Roberts wanted a taste of what he will confront from Inglis, it came two weeks ago from his new Blues teammate Mitchell, who beat Roberts twice on the outside to set up tries before "the Jet" struck back with the individual try of the season from 70 metres.

"Everyone has seen the clash of him [Roberts] and Latrell Mitchell a couple of weeks ago and I think it will be sort of similar. He’s [Mitchell] big and lanky and has a good fend on him and so has GI.

"GI will do his thing, he’ll try to palm him off and get on the outside so I have to be ready for the flick pass and he can probably even put a kick through or a two-on-one pass."

Injuries no issue for Queensland

Like Trbojevic, Holmes is a fullback on the wing. He’s also a right-side attacker playing on the left. But he says his experience in the World Cup for Australia, where he scored 12 tries in the series and set an international record with six tries against Fiji (after scoring five against Samoa), has been invaluable.

"I’ve had a pretty good run in rep footy [scoring tries] but in saying that I’ve always said I’ve had the best players in the world play in that team inside me," Holmes said.

Holmes will be ready if given the goalkicking duties ahead of Dane Gagai, a pressure role as successor to Cameron Smith and Johnathan Thurston who have held the duties for all but one match since 2005.

He said he won’t be fazed by the pressure as he had been his team’s main kicker right through his junior days and the lower grades for the Sharks. Yet he has kicked only 23 goals in the NRL.

Maroons coach Kevin Walters will probably decide on Sunday who will take the goalkicking duties. 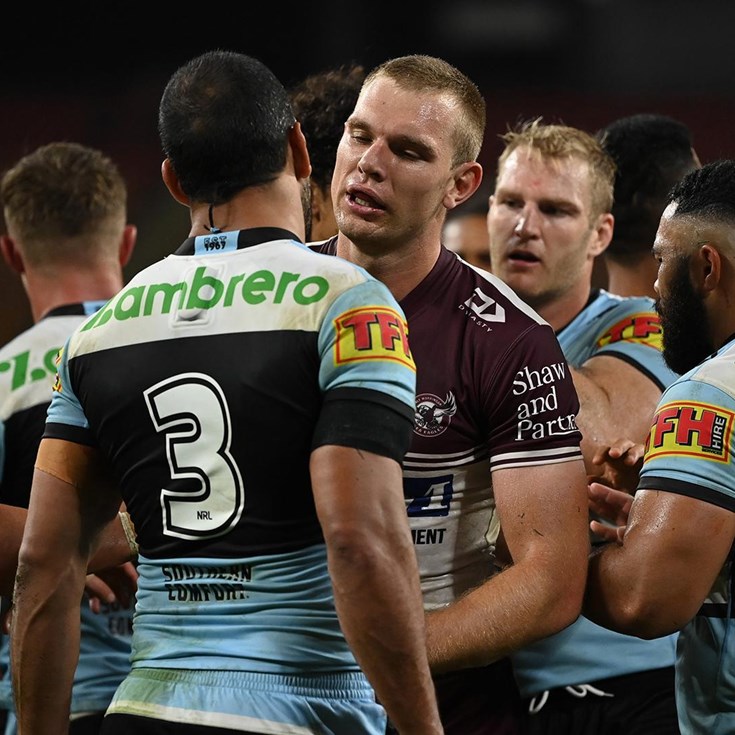