The Burgess brothers steamrolled Cronulla as John Sutton and Robbie Farah turned back the clock to help stamp the Rabbitohs as genuine premiership contenders at ANZ Stadium on Friday night after registering a fifth consecutive win.

The 22-14 scoreline belied the Rabbitohs dominance in what was effectively a one-sided contest until the final five minutes when the Sharks scored two late tries.

South Sydney prop Tom Burgess scored two tries and was one of the many Souths stars as they overpowered the previously fourth-placed Cronulla to record their seventh win in their last eight matches. That record includes defeats of the Dragons, Warriors and Roosters.

With their next four matches against teams positioned in the bottom half of the ladder, the Rabbitohs appear almost guaranteed of a finals berth and were described by Andrew Johns as "the real deal" during commentary of the Telstra Premiership match on Channel Nine.

Souths were missing Greg Inglis and Dane Gagai on Queensland duty and NSW debutants Damien Cook and Angus Crichton, but they still boasted an impressive forward pack and that was where the game was won.

England star Sam Burgess dropped back to the second row in Crichton's absence to partner Sutton, his 2014 premiership winning captain, who has recaptured his best form this season.

Farah, the former NSW hooker, made 62 tackles in his first NRL appearance of the season in place ofCook, and was instrumental in his side's final try of the match by Tom Burgess.

With Burgess and his twin brothers, George, starting in the front row and boom back-rower Cameron Murray at lock, the Rabbitohs dominated in the middle of the field to create a platform for halves Adam Reynolds and Cody Walker.

In comparison, the Sharks struggled to make metres and on one occasion in the first half five-eighth Matt Moylan was forced to kick on the last tackle from inside his own 20 metre zone.

Until the last 10 minutes, the Rabbitohs had been averaging about 10 running metres more in each of their sets of possession compared to the Sharks, with George Burgess (123m), Tom Burgess (140m), Sam Burgess (139m), Sutton (150m) and Murray (105m) all running more than 100 metres.

Andrew Fifita (146m) and Paul Gallen (130m) were the only Cronulla forwards to carry the ball more than 100 metres, with prop Matt Prior (70m) the next best.

Adding to the Sharks woes was the loss of Test forward Wade Graham in the 21st minute due to concussion after copping an accidental knee from Sam Burgess, the acting Souths captain.

Rabbitohs centre Braidon Burns was forced from the field just a minute later with a knee injury and coach Anthony Seibold had to play interchange backrower Tyrell Fuimaono in a position he was already struggling for depth without Inglis and Gagai.

After levelling the scores at 2-2 with a 12th minute penalty goal, Reynolds helped put his side in front a minute later when he ran the ball to the line and passed to Walker, who put Sutton into space on an angle run before finding Tom Burgess in support.

Another Reynolds penalty goal extended Souths lead to 10-2 in the 25th minute and a cross field bomb by the former Blues playmaker resulted in a try to winger Campbell Graham five minutes after halftime.

With Rabbitohs winger Robert Jennings [professional foul] and Cronulla five-eighth Matt Moylan [repeated infringements] in the sin bin for separate incidents, Tom Burgess sealed the win when he crashed over for his second try in the 71st minute.

Cronulla centre Jesse Ramien scored what appeared to be a consolation try five minutes from fulltime but when winger Sione Katoa dived over in two minutes later there were hopes the Sharks could snatch an unlikely win. But the clock beat the Sharks.

News & Notes... Cronulla international Josh Dugan will be sidelined for up to a month with a fractured foot...the Rabbitohs have won four from five at ANZ Stadium this season...Matt Moylan played his 100th NRL game... the Sharks meet the Tigers at Southern Cross Group Stadium next Sunday, while the Rabbitohs head north to the Gold Coast for the Titans. 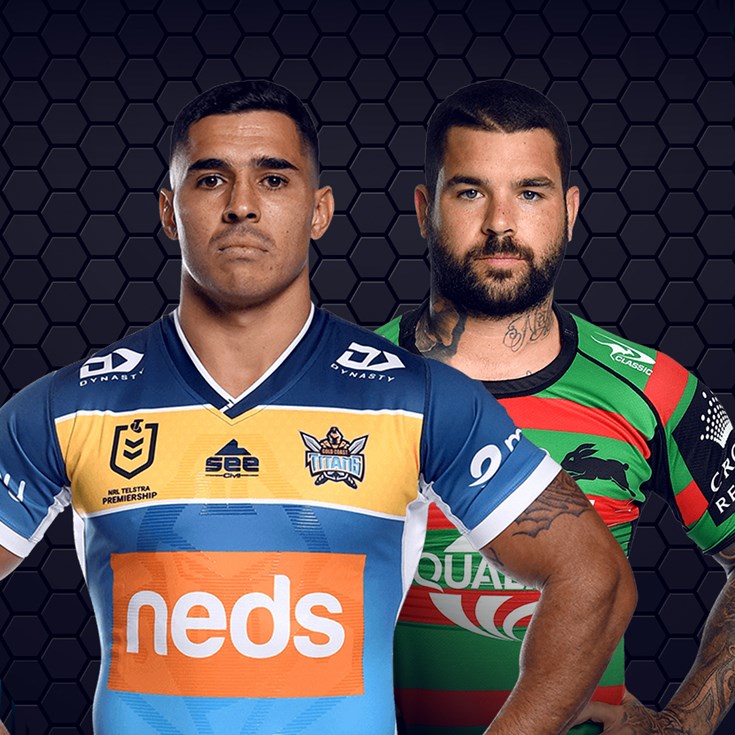