Jarryd Hayne has taken flight in Blue & Gold for the first time in almost four years, sparking a 20-14 win over the Cowboys and arresting Parramatta's slide toward the wooden spoons that featured all too often in his first Eels stint.

A Hayne double – his first for his junior club since round 26, 2014, some 1372 days ago – proved the difference in an error-strewn contest at Darwin's TIO Stadium.

Having last encountered North Queensland deep in the 2017 finals series, Parramatta's triumph snapped a five-game losing streak that had the pre-season finals fancies stuck on their lonesome at the bottom of the ladder, and pressure piling up on coach Brad Arthur as a result.

The Eels still remain two points adrift of their nearest rivals, which is now the Cowboys, whose fall from grace has mirrored that of their opponents.

For Hayne this was a welcome salvo in what has been a wretched homecoming to date, with tries in the 14th and 48th minutes capping a successful return from his ongoing hip injury.

For Johnathan Thurston – who shared that famed 2014 Dally M with Hayne – the frustration was palpable.

Three times the Cowboys skipper laid on tries for his teammates, only for a dubious forward pass call to deny Gavin Cooper, before Kyle Feldt and then Justin O'Neill spilling their lollies with four-pointers beckoning.

Opposing No.7 Corey Norman meanwhile came into the match still troubled by a foot injury.

His night off the boot produced an equal share of rocks and diamonds, with two kicks sailing out on the full, two more forcing drop-outs and another putting Hayne's second try on a platter.

It was Hayne who first troubled the scorers, earning a penalty 14 metres out from the line and then barging through a Cowboys defence asleep at the wheel from the resulting quick tap.

Feldt was over in the corner soon enough in response, only for Te Maire Martin's looping long ball to be controversially called forward and the try in turn called back.

Within moments though Martin was slicing through the Eels defence once more from a Lachlan Coote inside ball, only for the Kiwi playmaker's pass to again miss the mark and let the chance slip.

At the other end a Michael Jennings bobble cost him four points after winning the race to a Bevan French grubber.

After having his first attempt denied, the bunker came to Feldt's aid with his next crack in the 32nd minute.

Feldt looked to have bounced his put-down after tip-toeing down the right touchline and was referred upstairs as such, only for the video referee to find he kept his fingers on the ball, drawing North Queensland level at 4-all.

That stalemate lasted all of 80 seconds after the break. A dropped bomb by Coote gave Parramatta prime field position, and a Clint Gutherson long ball had George Jennings over in the corner on his 25th birthday.

Hayne's second for the evening – claiming Norman's cross-field kick to dot down under the posts – had the Eels on their way and out to a 14-4 lead.

With Thurston's best efforts going to waste and North Queensland's attacking woes going nowhere, another mistake under the high ball from Coote saw Michael Jennings streak away to seal it.

Two tries in the final minute to first Matt Scott and then rookie Enari Tuala shortened the end margin but did nothing in a loss needed like a hole in the head for the Cowboys, and a win just flat out needed by the Eels.

News and Notes: The crowd of 8393 is the smallest at Darwin's TIO Stadium since 2016… Parramatta's Siosaia Vave was placed on report for a cannon ball tackle on Antonio Winterstein… Kyle Feldt's mixed night at the office saw him nab a try, bomb another and have a third controversially denied among 16 runs for 221 metres… The Eels host South Sydney at ANZ Stadium next Thursday while the Cowboys back up at home on the Friday against the high-flying Warriors… Parramatta will return to Darwin in 2019 as per their agreement with the Northern Territory government, with an option to bring a home game north again in 2020. 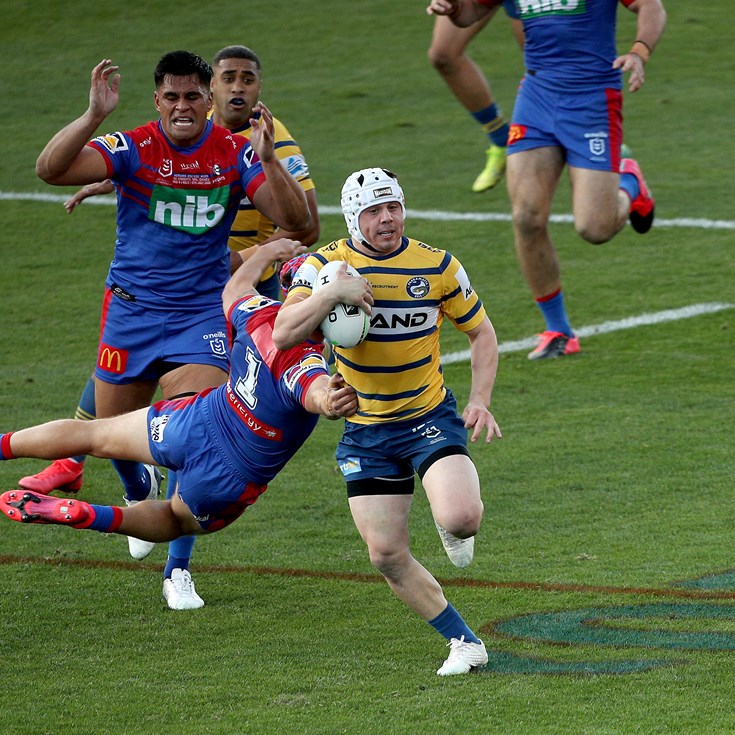