They took the boy out of Fiji, but thankfully never really took the Fiji out of Akuila Uate.

Taught him English. Put him in sky-blue, then green and gold. Put him in front of the microphone too, even when "yes and no answers" were all they got back.

Never really coached the fumble out of his game. Or, by the grace of rugby league's gods, that inimitable island flair.

One of the game's finest entertainers of the past decade has been the result - 129 tries and counting across 199 games for Newcastle and Manly.

At times, a source of frustration and four-letter words among fans and teammates alike.

"There was one year where he kept turning up late so we all got punished with early-morning training sessions," former Knights teammate Danny Buderus tells NRL.com.

"It kept happening so we all pulled him aside after one of these early sessions and we just said 'Aku, it's got to stop. You need to turn up on time, you're punishing everyone'.

"He just looked at us and said 'I cannot promise you this won't happen again' in his great Fijian voice."

This is not a 21-year-old rookie still coming to terms with life in the NRL fast lane.

"This is when Wayne Bennett was there around 2012 and he was playing Origin," Buderus laughs.

"We were expecting 'sorry boys, I've let you down' and that's what he came out with. It was priceless.

"We all just laughed and threw him in the pool at 6 o'clock in the morning. You can't help but love him."

Built for the game better than anyone Andrew Johns reckoned he had seen, Uate couldn't help but love it back.

Even when it had him up at 7am to get through school on the Central Coast. Then travelling 90 minutes each way by train for Knights SG Ball training, returning home after midnight.

Barrett: Cherry knows how we feel about him

Repeating the gruelling schedule day-in, day-out as a 17-year-old.

Learning English all the while, sent to Australia from the tiny Fijian village of Votua by his mum, with little grasp of the language, much less how to read or write it.

"It was a massive culture change for me," Uate says.

"It started in SG Ball, at first I couldn't understand much at all but I just learnt English on the way.

"It was basically from scratch. On the field with plays and things like that, then off it with media, I used to hate it. "

Buderus remembers getting to games early or tracking down the Knights juniors on a day off just to watch this Fijian kid from Woy Woy go around.

Soon enough the Newcastle faithful were behind him as well. A club record 110 tries, with a few fumbles along the way, should always hold him in good stead in the Steel City.

"He was a breath of fresh air with his approach to footy," Buderus says.

"Always has been. We get brought up playing percentages, he was just carefree... going at 100 miles an hour, going for intercepts, trying to take balls on the fly in that Fijian style.

"We used to just get that big smile out of him back then too, that was it. It was infectious though, that happy personality was all he needed to communicate."

The last few years at Newcastle the big smile wavered. Knee and ankle injuries saw a dramatic drop-off in the cult hero's form.

His near-$500,000 salary saw the knives out and Uate dumped to reserve grade. Eventually he was picked up by Manly, released from his Knights contract with no chance of a farewell game due to injury.

He'll play game number 200 against the Dragons on Saturday, given a second wind by Trent Barrett when most figured his rugby league race was run.

"The injuries were rough at Newcastle, it was torture," Uate admits.

"I struggled with those injuries. And I was thinking, 'how am I going to play first grade again with all these injuries?'

"I just stuck at it, it didn't matter if I was playing reserve grade or local footy, it was about having fun.

"But the hard work eventually paid off and I'm proud of that, then Baz called and I was lucky enough to get another chance."

A three-year deal with Super League's Huddersfield presents Uate's next crack at the end of the year.

With Manly's salary cap in all sorts and serious security on offer in the UK, Uate and his wife Samantha will pack up kids Tiana (seven), Miri (four) and Kingston (three) for the next leg of his league odyssey.

This week's milestone came as a pleasant surprise. And that famed Fijian grin follows in quick time.

"I was sitting there with the kids and my wife just said to me 'it's your 200th game this weekend'," Uate says.

"I had no idea. I'm very thankful for all the staff and players that I've played alongside who have me along the way.

"It's been a blessing, especially the last couple of years.

"It's a big achievement for me, especially when I look back on all that." 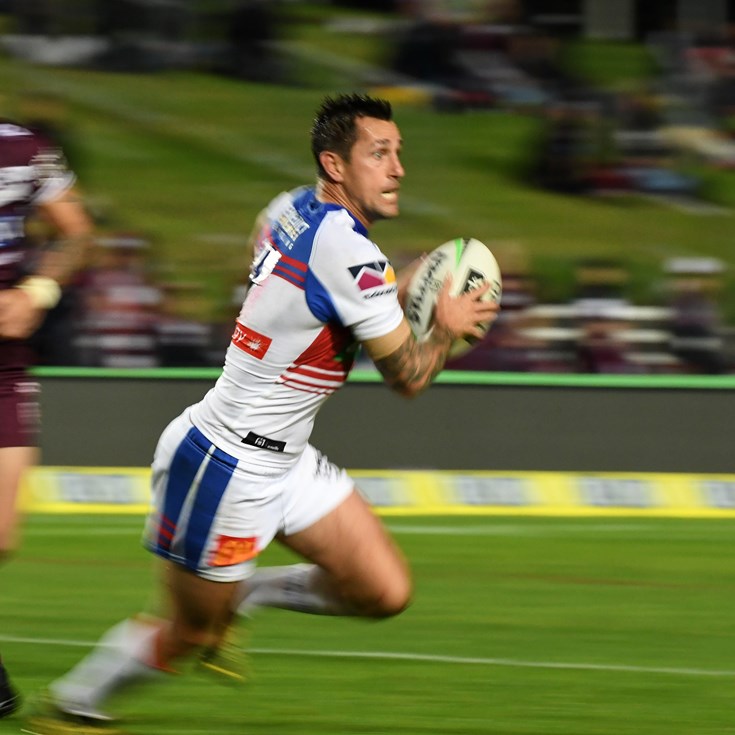 Starling, Walker free to train and play round one