If Brad Fittler wasn’t already used to the dizzying heights and devastating lows of being a State of Origin coach, he is now.

The state of New South Wales took a collective deep breath as it watched two key men go down in Friday night’s NRL game between the Panthers and Roosters – but spare a thought for the man charged with delivering a long-awaited Origin series victory.

To see Tyrone go in there was incredibly warming, it was just a really nice feeling.

Fittler was on Channel Nine duties when he saw Reagan Campbell-Gillard leave the field with a broken jaw in the first half – an injury which would soon rule him out of Games Two and Three. An unfortunate second-half tackle between NSW representatives Nathan Cleary and Latrell Mitchell, however, was an even greater cause for concern.

“The one with Latrell was a real concern, because that part of the body can really change your life,” Fittler told NSWRL.com.au of the incident. “I think everyone’s first reaction is ‘let’s hopefully tick off a few things first.’

“You think the worst straight away and you just hope for the best and he was in great care the whole time. When you saw the tackle you could see how it obviously could be very scary, just the amount of flex he had in his neck.”

Play was stopped for several minutes as Mitchell was placed in a stretcher and taken from the field, where he would remain until full-time. The Roosters centre was soon showing positive signs, sitting up in the change rooms, but some doubts still remained about the damage caused.

While it was a difficult time for Mitchell, his friends and family and Fittler, a moment in the sheds soon eased the pain of a tough situation. Upon being sin-binned for the Panthers, Tyrone Peachey – Mitchell’s opposite number on Friday night – opted to visit the Roosters’ change rooms, rather than his own, to check up on his Origin teammate.

The sight of Peachey embracing a worried Mitchell speaks of the brotherhood that now exists in the Brydens Lawyers NSW Blues.

“That was a really tough time for a lot of people, family and friends and coaches,” Fittler said. “There was a lot of people watching on with Latrell to see how he pulled up, and to see Tyrone go in there was incredibly warming, it was just a really nice feeling.

“I’m not sure if it’s legal!” Fittler joked. “It was just cool, it was just a couple of footballers looking after each other and I thought it made a lot of people feel good in a really tough situation.”

Mitchell has since been cleared of serious damage and has been named in Fittler’s 20-man squad for Origin II. Peachey, too, has been named, with both men expected to earn their second appearances for NSW on Sunday, 24 June. 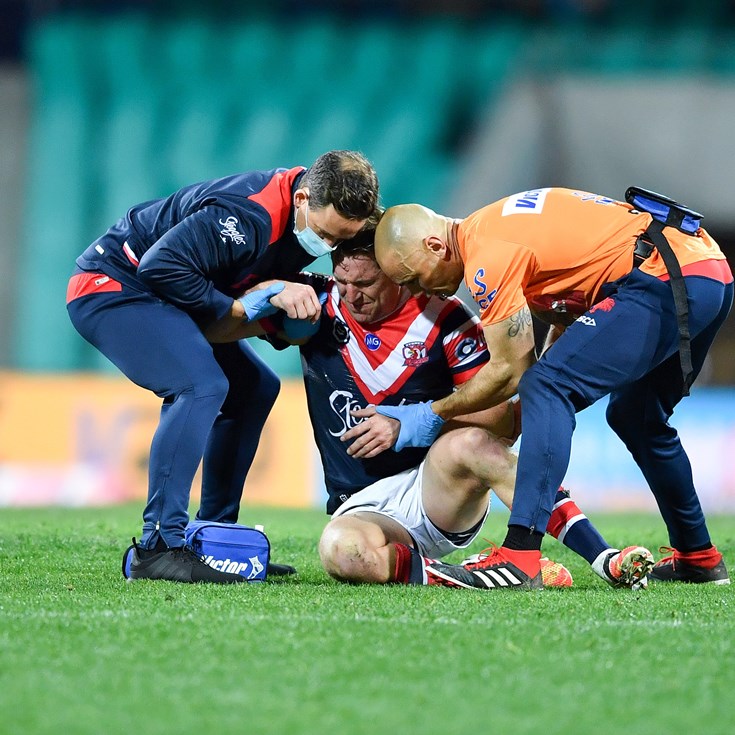 Take our medicine: no reinforcements for Roosters

Robinson will not rush SBW in