Queensland Origin five-eighth Cameron Munster has a couple of words for anyone suggesting Ben Hunt might not be retained as the Maroons' halfback when the team is named on Sunday.

"Obviously it's him. Ben is the form halfback in the comp," Munster said without hesitation.

And for three-and-half years in the NRL Munster played alongside someone who trumps Hunt in terms of effectiveness and big game experience - former Melbourne halfback Cooper Cronk.

"If Kevvie [Maroons coach Kevin Walters] decides a different partner to him then we'll see how we go," Munster said.

"But I say Ben is out best number seven."

Walters and Queensland chairman of selectors Gene Miles announce the Maroons team on Sunday at 7pm. Game three of the 2018 series is scheduled for July 11 at Suncorp Stadium.

NSW will take a 2-0 lead into the final game after winning game two 18-14, but Munster's lip curls when asked what the Maroons' mindset is ahead of Origin III.

"We've always got belief," he said.

"I know the score line doesn't reflect how good we were [in game two]. I thought we had the better game, but the Blues were better than us in key moments.

"We'll be better in game three. We want to get the win to stop the clean sweep. That's our main focus.

"The series is gone but we can still play some seriously good football and go out with a bang."

Munster put some seriously strong hits on his opposite half in Cronk in the 9-8 win over the Roosters at Adelaide Oval on Friday night.

"I was trying to get at him as much as I could and make sure he knew I was there, when I made a tackle or he did," Munster said.

"It was really exciting and good to see him enjoying his footy. We'd love to see him still at our club, but obviously things change. Hopefully we get to play them again at the back end of the year.

"It's good to have the wood over Coops one-for-one. It will be interesting to see how things go for us from here.

"We're top four at the moment and that's something we pride ourselves on. Hopefully we can stay there for the rest of the year."

Skipper Cameron Smith rubbed his eyes as he watched Cronk emerge from the Adelaide Oval tunnel just before kick-off on Friday.

"It was a little strange quite honestly when both teams ran out. I've never seen him in those colours," Smith said.

"Obviously I'd seen him a few times throughout the year playing on the TV but to actually to see him in the flesh was a little strange.

"I only had to tackle him once … but when you're in that moment in the game, it's just another person in a Roosters jersey.

"I thought all the boys did a good job. There wasn't too much talk or banter. We just got on with our jobs. Cooper's a professional guy and we're the same." 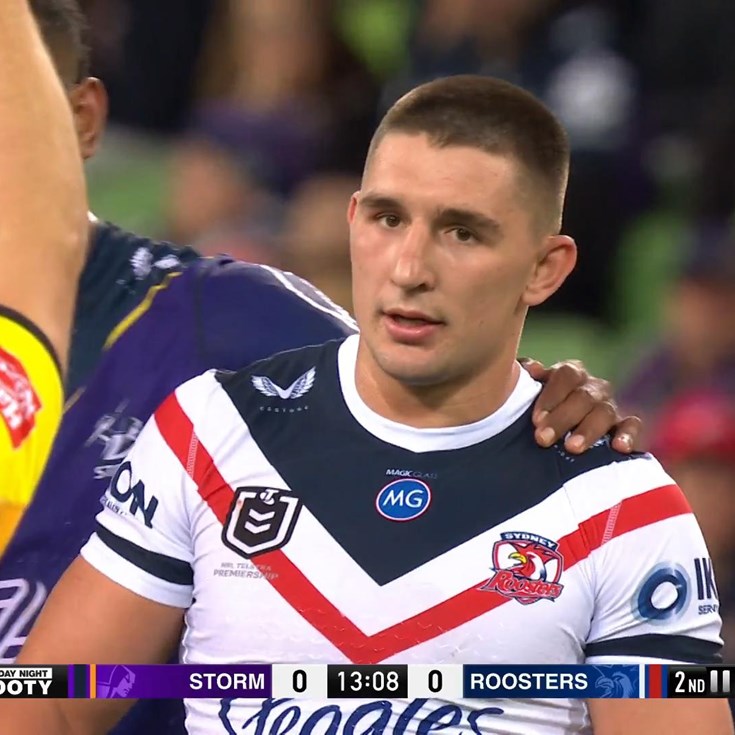 Presented By Sportsbet 2 hours ago
02:46