It's hard to imagine two teams coming into a crucial game with more contrasting formlines than the Broncos and Warriors.

Brisbane ran riot on the Gold Coast in round 17, unleashing a potent attacking display which reminded everyone why they're considered a genuine title contender.

The Warriors, meanwhile, were embarrassed by a Penrith side missing its two key playmakers James Maloney and Nathan Cleary to Origin duty. The Panthers are also without front-row enforcer Reagan Campbell-Gillard.

How the Warriors recover from having rookie Panther Jarome Luai run rings around them on a night when most expected them to climb into the top four with a win is the $64 question.

Given they face a daunting clash with the Melbourne Storm in round 19, it's vital that Stephen Kearney's men put the Penrith debacle to the back of their minds quickly and concentrate on what got them to where they are now.

That's eighth spot and a comfortable three games clear of the chasing pack. If they hold their nerve in the run home then the Warriors can see September action for the first time in seven years.

Key match-up: When Shaun Johnson fires, the Warriors fire. When he has an off day, they inevitably struggle. This Sunday the mercurial Kiwi halfback comes up against Kodi Nikorima, who will be on a high after orchestrating the shutout of the Titans. Johnson has the runs on the board and the big-game temperament but Nikorima has the home ground advantage and the confidence that comes off the back of a big win.

For the Broncos to win: Give Anthony Milford the ball and give him alicence to thrill. When the Broncos No.6 plays off the cuff and on the edge, he can do things very few in the NRL are capable of. The forwards need to roll up the middle, play the ball fast and give the halves a platform to unleash a posse of speed men who'll run rings around the Warriors if given half a chance.

For the Warriors to win: Consign last week's loss to history and come out with the sort of intensity which catapulted them to a 5-0 start to 2018 and had them daring to dream. The knives are out for the Warriors this week and if they let the negativity get inside their heads they will find themselves doing a lot of breathing exercises behind their own goal line at Suncorp.

Broncos stat attack: The 34-point haul at Cbus Super Stadium was Brisbane's biggest score of the year. Given that they average 20 points per game in 2018 this was an ominous warning to rivals that they are hitting their straps in attack as the finals draw nearer.

Warriors stat attack: The Warriors have won six from eight away from home this season so a trip to Suncorp should hold few fears. Among their scalps on the road were the Rabbitohs, Raiders and Roosters in a stunning opening month to the season.

And another thing: The Warriors faltered last week against a weakened Panthers outfit so you can bet your life they won't underestimate a Broncos team with Corey Oates, Andrew McCullough and Josh McGuire all hoping to back up from Origin III.

The Broncos have made a few changes, with Jayden Su'A shifting to centre after James Roberts was ruled out. Andrew Fifita starts in the back-row and Patrick Mago moves from the reserves to the interchange bench, with Tevita Pangai jnr withdrawing due to a minor hamstring injury. Jonus Pearson, Sam Tagataese, Jake Turpin and Tom Opacic were cut an hour before kick-off.

The Warriors are 1-17. Gerard Beale starts on the wing with Ken Maumalo (knee) out and Anthony Gelling joining the bench. Joseph Vuna replaces Ligi Sao on the bench. Mason Lino and Blake Ayshford were cut from the reserves on Saturday afternoon, while Ligi Sao and Karl Lawton were omitted an hour before kick-off.

Petero Civoniceva's prediction: Brisbane were at their attacking best against the Titans, and I sense they are building towards something big ahead of the finals. They can look to climb up the ladder now that their place in the top eight is basically assured. The Warriors were awful last week, and I can't see much improving at Suncorp Stadium. 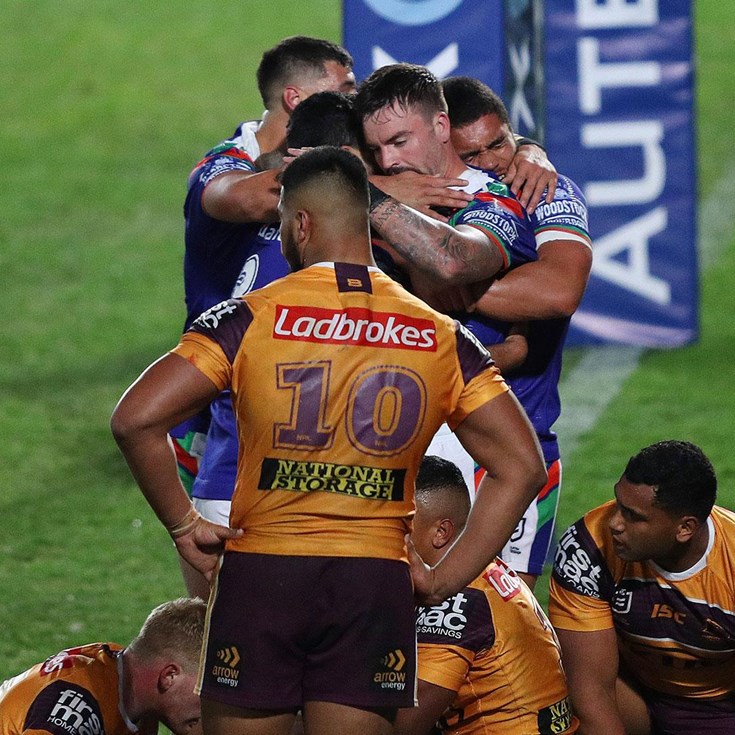