The Cowboys come off a well-earned bye and will have their sights set on playing spoiler in the remaining eight rounds, starting with the ninth-placed Raiders this Saturday in Canberra.

The 2015 premiers can also upset the apple cart for the Dragons (round 19), Roosters (round 21), Broncos (round 22) and Sharks (round 23) if they find some form. Or they could slide to the ignominy of a first wooden spoon since 2000 if Johnathan Thurston can't spark a surge in his farewell season.

Sitting on 10 points with only the Bulldogs and Eels below them, the spoon is a very real possibility - but Thurston, Jason Taumalolo, Gavin Cooper and Lachlan Coote will be doing all in their power to ensure that doesn't happen.

The mission to salvage some pride starts in the national capital, where the Cowboys confront a Raiders outfit which produced a miraculous escape at Belmore to keep their slim finals hopes alive.

Two teams still with plenty to play for and plenty of players capable of turning on the razzle-dazzle in a match which should be high scoring and highly entertaining.

Key match-up: If Josh Papalii backs up from Origin, his showdown with Jason Taumalolo will be worth the price of admission alone. Two of the NRL's most powerful runners will go all out to get their respective teams over the advantage line and take bragging rights over a respected rival. Both are guaranteed to make big metres and have a big impact - which one does it best could determine the outcome.

For the Raiders to win: Don't get behind by 14 points again because they used their 'Get Out of Jail' card last week. Canberra need to stay in the grind for long periods and work over Thurston for the full 80 minutes. Send plenty of traffic his way and crank up the kick pressure on the great man, who must be feeling the effects of a gruelling campaign.

For the Cowboys to win: The men from Townsville need to keep their heads up and forget about the ladder. Three of their past five losses have been by a single point so they're not that far away. Two of those defeats were against Souths and the other was against the Storm so Thurston and coach Paul Green will have taken plenty of positives out of the past six games. They just need some of that effort to translate into a few morale-boosting wins.

Raiders stat attack: Canberra have been involved in seven matches this season which were decided by six points or less. The 'cardiac kids' were on the right side of the ledger in a tight one last Saturday but prior to that they had lost five of the six nailbiters.

Cowboys stat attack: The Cowboys have conceded fewer points this season (325) than five of the sides above them on the ladder. Brisbane (334), Raiders (350), Titans (401), Knights (428) and Sea Eagles (374) have all leaked more points than North Queensland.

And another thing: Nick Cotric is still just 19 years of age but the Raiders winger is banging loudly on the Origin door. The 98kg powerhouse was mentioned in Blues dispatches before this year's series began and he has vindicated the hype with nine tries in his past eight matches.

Sia Soliola moves into the starting side, with Liam Knight back to the bench. These moves came after Joe Tapine was suspended during the week. Jack Murchie and Craig Garvey were the two players omitted an hour before kick-off. In changes from last week: Fullback Brad Abbey (concussion) and prop Shannon Boyd (calf) are out, Jordan Rapana (hamstring) returns on the wing with Nick Cotric switching to fullback. Josh Papalii returns at lock, Siliva Havili moves to the bench and Junior Paulo starts at prop for Boyd. Luke Bateman (knee) returns on the bench. Blake Austin retains the bench utility role. Royce Hunt was the player left out 24 hours out from kick-off.

In the only change made an hour before kick-off, Shane Wright moves into the back-row with Origin player Coen Hess dropping back to the bench. Justin O'Neill, Ethan Lowe and Francis Molo were the players omitted an hour before kick-off. John Asiata (pec) returns at prop, pushing Corey Jensen to the bench and Francis Molo to the reserves. Gavin Cooper and Coen Hess have been named to back up from Origin III. Mitchell Dunn and Jake Clifford were the two players left out 24 hours before game time.

Petero Civoniceva's prediction: Anyone can see North Queensland are down on confidence. They are a team which is used to winning, especially in the last five years. Canberra need the two points to keep their faint finals hopes alive, so their level of desperation on a cold night should get them the chocolates.
TIP: Raiders by 8 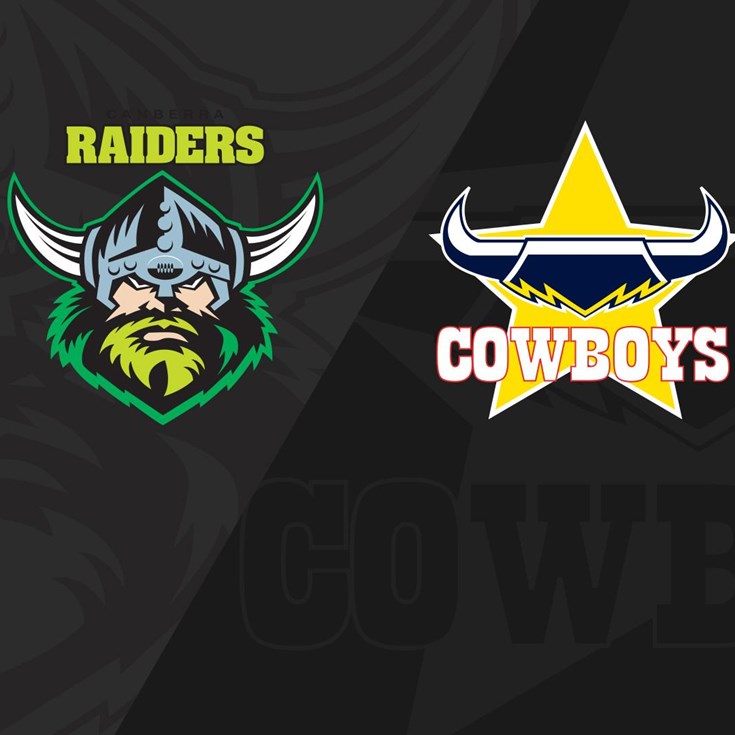 Stuart: Real Origin players back up

Oldfield gets his second