They kept their faint finals hopes alive for another week, but if Canberra want to keep playing past round 25 their run to the post-season might be without their inspirational skipper Jarrod Croker.

The 27-year-old limped from the field in the 30th minute after dislocating his knee for the second time.

It is the same knee he injured as part of last year's All-Star match and the worst-case scenario could see him out for the rest of the season.

"It was disappointing losing our captain, I don't know the extent of it, but it doesn't look real good," Canberra coach Ricky Stuart said.

"I suppose the medicos will be able to explain it better, but they need to look at why the kneecap keeps popping out, so hopefully it's not too bad and doesn't need an operation, if it does then it's season-ending."

The injury to Croker put a dampener on what was an excellent performance from the home side, as they stormed home to beat North Queensland 38-12 at GIO Stadium.

Stuart said injuries and suspensions have made this season even tougher as they continue to try and claw back lost ground from the first month for the season.

"It's been the nature of our season this year, getting Josh (Hodgson) back in round 14 and like any coach understand it, we're not the only team will have it, when you've got your best players on the sideline it makes it even harder.

"We've got Jack Wighton and Joey Tapine sitting on the sideline tonight, Jarrod for most of the game, so it makes it awfully hard and it makes a win like this is even better because players get an opportunity."

There is no better example of a player making the most of their chance in the NRL than Michael Oldfield, who scored a hat-trick to help the home side pull away.

Hodgson paid tribute to Oldfield for his dedication despite being a fringe player for most of the season.

"I think he's one of the most professional blokes I've seen, without a doubt he's a regular first-teamer every week but he's a bit unlucky we've got Nick Cotric and Jordan Rapana on the wings and it's probably kept him out of the side," he said.

"It's no fluke, he does all of his extras, he works very hard and you know what you're going to get from him every week."

Josh Papalii again showed why he is one of the best forwards in the NRL, backing up from State of Origin to play 74 minutes, racking up 174 metres from 19 runs and 32 tackles.

"That's what real Origin players do, they come back and perform for their club," Stuart said.

Stuart would not speculate if Blake Austin, who filled in for the injured Croker, would be the starting left centre when the Raiders travel to take on the Cronulla Sharks at Southern Cross Stadium next Saturday.

Croker is set to miss at least 2-3 weeks and club officials on Sunday said they think he is likely to miss the rest of the season but they are awaiting scans on the injury. 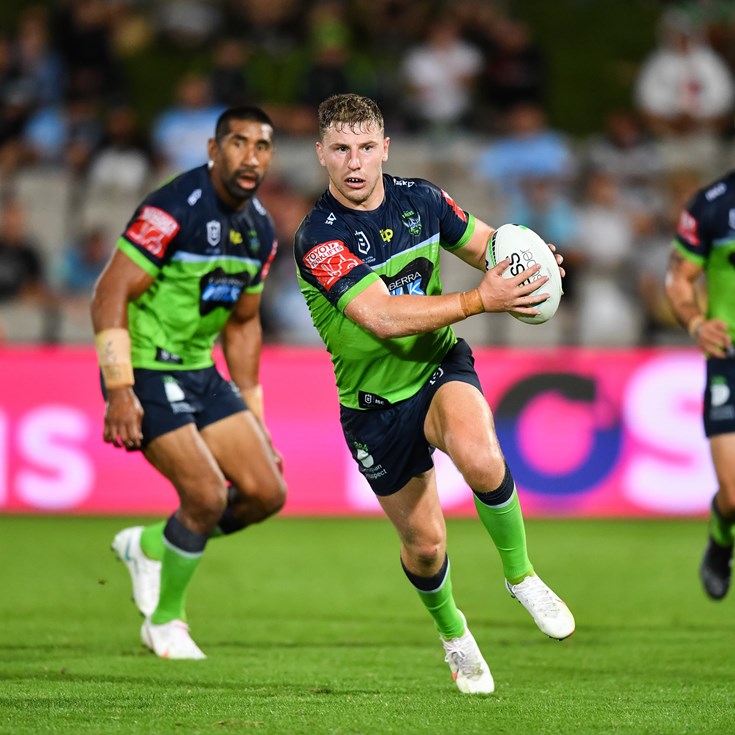 'Sticky was looking after me': Croker primed after extra time off