The Sharks are coming off an impressive road victory over Penrith and coach Shane Flanagan will be challenging his side to back it up with an even stronger all-round performance against a desperate Raiders team.

Cronulla don't do one single thing brilliantly but do lots of little important things very well and more often than not make it very hard for opponents, simply because they usually aren't going to beat themselves.

Wade Graham adds a certain indefinable dimension to the Sharks and it wasn't surprising that his return from injury last week coincided with a convincing win over a team that had thumped the Warriors the previous week.

Canberra kept their faint finals hopes alive with last week's defeat of the Cowboys and are chasing a third straight win. They will also be out to avenge a 24-16 round 10 home loss to the Sharks.

Key match-up: He doesn't get the same accolades as his more illustrious colleagues in the Cronulla pack but Jayden Brailey understands he has an important role to fill if the Sharks are going to push for a premiership. Brailey has a difficult challenge on his hands to out-play Josh Hodgson – one of the best hookers in the business.

For the Sharks to win: Sharks fans loved seeing Matt Moylan lead the way last week against Penrith. But that was against his former team and judging by his animated performance Moylan's motivation to win was off the charts. The Sharks will be a force for the rest of the regular season and throughout September if Moylan can have a similar impact every week.

For the Raiders to win: Ricky Stuart played his cards right a fortnight ago with the timely injection of Blake Austin into the game and the Raiders stole victory with three tries in the final six minutes. Austin wasn't as prominent in last week's win over the Cowboys but had another solid game off the bench. With Aidan Sezer out injured, Austin finds himself back in the starting side and his influence will be critical to the Raiders' chances. If Austin can temper his game and control the tempo then Ricky's men could pull off an upset.

Sharks Stat Attack: Valentine Holmes has been in red hot form for Cronulla and Queensland, scoring a sensational 14 tries in his past 12 games. Centre Jesse Ramien meanwhile has scored in each of his last six appearances.

Raiders Stat Attack: Cronulla has been a happy hunting ground for the Raiders of late, with Canberra winning in their past four visits to Southern Cross Group Stadium. It's been five years since they have been defeated twice in a regular season by the Sharks.

And another thing: The Raiders are two wins outside the top eight with seven games remaining. If they do somehow make it to the finals, they will have certainly earned it. After facing the Sharks, Canberra finish the regular season with games against Melbourne (away), Penrith (away), the Tigers (home), Roosters (home), Rabbitohs (home) and Warriors (away).

Sharks: The Sharks will line up 1-17. Jesse Ramien returns at centre in place of Kurt Capewell in Cronulla's only change. Capewell is out until round 24 with a finger injury. Sosaia Feki and Ava Seumanufagai were dropped an hour prior to kick-off.

Raiders: Blake Austin returns to the starting side at halfback replacing Aidan Sezer (hamstring). Jack Murchie comes onto the bench to make his NRL debut. Brad Abbey returns from concussion at fullback with Nick Cotric moving to the wing and Michael Oldfield shifting to centre in place of Jarrod Croker (knee, season). Craig Garvey and Royce Hunt were cut from the reserves an hour out from kick-off.

Petero Civoniceva's prediction: The Raiders had a great win last week and they are a very dangerous opponent in the run home. They have plenty of points in them but Jarrod Croker is a big loss. The Sharks are a very professional outfit and they know how to defend their line in big games. This should be one of the most entertaining games of the weekend but the Sharks will be too good at home.

Using the app? Click on the match centre above and swipe right to view up-to-date team lists 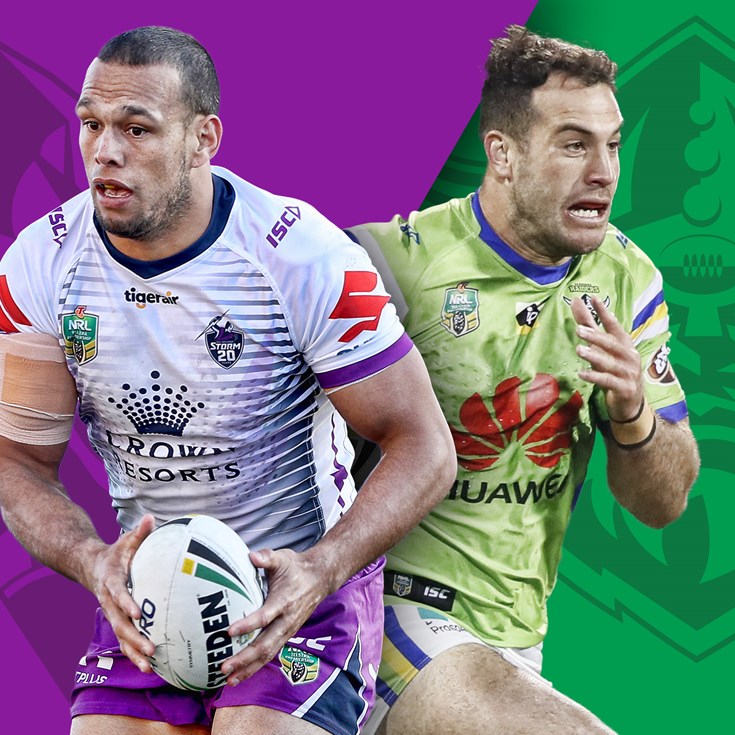