Canberra's late charge to the Telstra Premiership finals was left in tatters following a controversial try ruled against them in Cronulla's 28-24 win at Southern Cross Group Stadium on Friday night.

Despite trailing 22-6 at half-time, the Raiders had the upper hand in the second half to narrow Cronulla's lead to just four with a quarter of the game remaining.

Then came a dubious call to award Sharks winger Sione Katoa a try in the 57th minute that derailed the visitors' momentum in their comeback.

The Referees' Bunker ruled Sharks centre Jesse Ramien did not touch a cut-out pass in the lead-up to the try, despite touch judge Ricky McFarlane raising his flag to suggest play be stopped.

As communication between McFarlane and referee Bernard Sutton elapsed, Katoa strolled over the line as Raiders players stopped with their hands in the air reacting to what they believed was a knock-on by Ramien.

The Bunker ruled Ramien made no play at the football and awarded Katoa the try as Cronulla stretched their lead to 10 [28-18].

It overshadowed an otherwise entertaining clash as the Raiders overcame a 16-point deficit at the break to lay on two tries through Joey Leilua in quick succession [41st, 47th minutes].

A quick tap from Blake Austin caught the Sharks' defence napping with a late offload sending Leilua over for his first of the evening, before Josh Hodgson set Leilua up for the double close to the line.

The Raiders looked to have crossed through fullback Brad Abbey with nine minutes remaining but a Leilua pass was called forward.

A four-pointer to Jordan Rapana [77th minute] set up the grandstand finish but the Raiders failed to pull off a miracle win like the did against the Bulldogs two weeks ago.

Regardless of the result, Canberra will rue a poor first half as the Sharks jumped to a 22-6 lead through four first-half tries.

Dunamis Lui spilt the ball on the second play of the game and things got worse for the visitors, when Rapana was sin binned for a professional foul on Valentine Holmes.

The Sharks failed to take quick advantage of the extra man on the paddock missing a few opportunities but then Andrew Fifita made it look easy when he bumped off Lui and Josh Hodgson to charge over next to the posts.

With the wind swirling, Chad Townsend missed a simple penalty goal but the slick ball movement from the Sharks on the left edge minutes later extended their lead to 12-0.

Holmes continued his dominant form since returning from Origin to help send Ricky Leutele score down the left edge with some quick passing with Edrick Lee.

Canberra earned a reprieve against the momentum with Rapana making up for lost time on the paddock to bust through the line and link with Leilua, who sent Brad Abbey over to narrow the lead.

But the Sharks were quick to respond and put an exclamation mark on the first half with two tries before the break – Holmes with his third line-break of the evening to weave past a clumsy attempt from Michael Oldfield on the right edge, before Wade Graham crashed over with three defenders on top of him close to the siren.

Graham failed to return after the break with a groin injury in the only concern for Shane Flanagan's side, who leap into the top four temporarily.

For the Raiders, Oldfield battled a knee complaint but remained on the field.

News & Notes:  Sharks fullback Valentine Holmes has scored 15 tries in his past 13 games... the Sharks hadn’t defeated the Raiders twice in a regular season since 2013 but wins in round 10 and 19 have broken that drought….Canberra’s Jack Murchie made his NRL debut…the Raiders have now lost all seven games to teams currently in the top eight…Crowd: 10,016 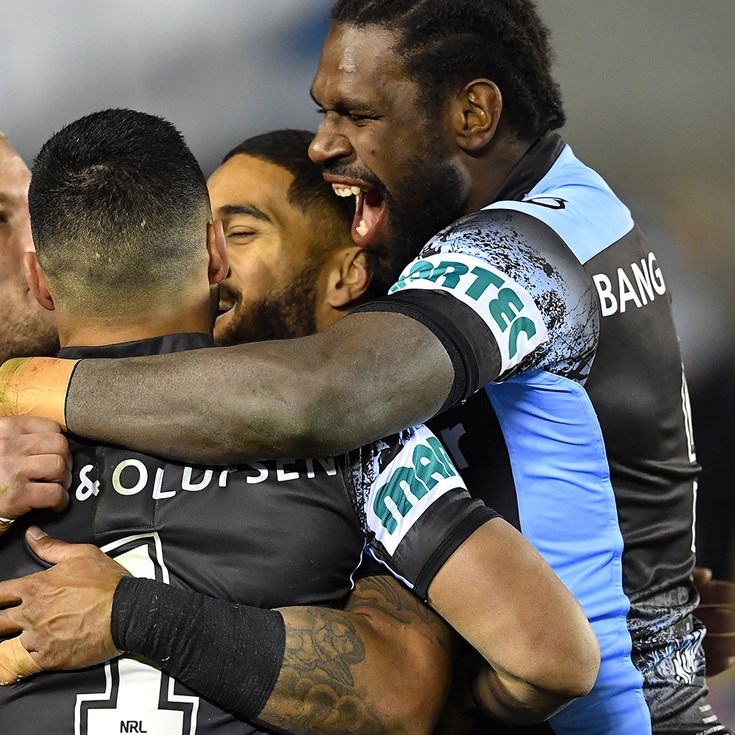