The Bulldogs have butchered Brisbane's top-four hopes with some razzle dazzle of yesteryear to pilot them to a shock 36-22 upset at ANZ Stadium on Thursday night.

Embracing 'The Entertainers' tag of old, Canterbury rattled up five tries against a shell shocked Broncos outfit that will likely find itself four points adrift of fourth place by the end of round 21 to be staring down a sudden-death scenario come finals time.

For the Bulldogs this shellacking secured their first back-to-back wins in over 12 months and proved a sight for sore eyes to a fan base that has been to hell and back in that same period.

Three blue-and-white tries in 10 minutes after halftime thoroughly blitzed the visitors, though there may be unwanted fallout yet for Canterbury after a trainer allegedly approached the referees at halftime questioning their officiating in the first 40.

"We will look into any comments that were made towards the referee," an NRL spokesman said.

At that stage the Broncos were somehow still in the contest thanks to a five-minute double from Dragons-bound prop Korbin Sims.

While his teammates seemed at a loss on how to break the Dogs line, Sims crashed over from close range in the 30th and 36th minutes, and found himself denied a rare front-rower's hat-trick when replays showed a double movement.

Sims' brace made for a 16-12 halftime deficit but proved the last shots fired either side of a Bulldogs barrage.

Early tries to Josh Jackson and Will Hopoate saw Canterbury skip to 14-0 lead with Broncos winger/wannabe second-rower Corey Oates twice bitten by balls from the boot.

With Oates understood to have knocked back interest from the Belmore club earlier this week, the Bulldogs got one back on the Queensland flyer, when his play at a short Broncos drop-out put it on a platter for Josh Jackson to open the scoring.

A short-side raid down the same right edge had Hopoate under the posts from a Kerrod Holland kick infield, before Brisbane worked their way back via Sims.

When Canterbury gave the ball air once more though that was the end of it - one play reaching from side of the paddock to the other sending Brett Morris over in to style to kick things off in the second half.

Twice more they came to Brisbane's left edge to find tries – first through Matt Frawley in the 46th and then Josh Morris in the 51st minutes – with Darius Boyd shifted out of the centres to fullback and Jordan Kahu shuffled from the wing to the bench as a result.

Late tries to Anthony Milford and Jamayne Isaako gave the score line some respectability but will provide little shrift north of the border as Brisbane pick up the pieces of another heavy defeat just as they looked to be building momentum.

The Bulldogs meanwhile should kick clear of the wooden spoon battle with their sixth win of the season and a chance to grab a seventh when they face out-of-luck Manly at Lottoland next week.

News & Notes: Second-rower Chris Smith, 24, played his first NRL match for the Bulldogs... the Bulldogs have been first try scorers in 14 of their 20 games...Broncos coach Wayne Bennett is still searching for that 400th win with the Broncos after this defeat ... Next week the Broncos head to Townsville to play the Cowboys, while the Bulldogs play the Sea Eagles at home. 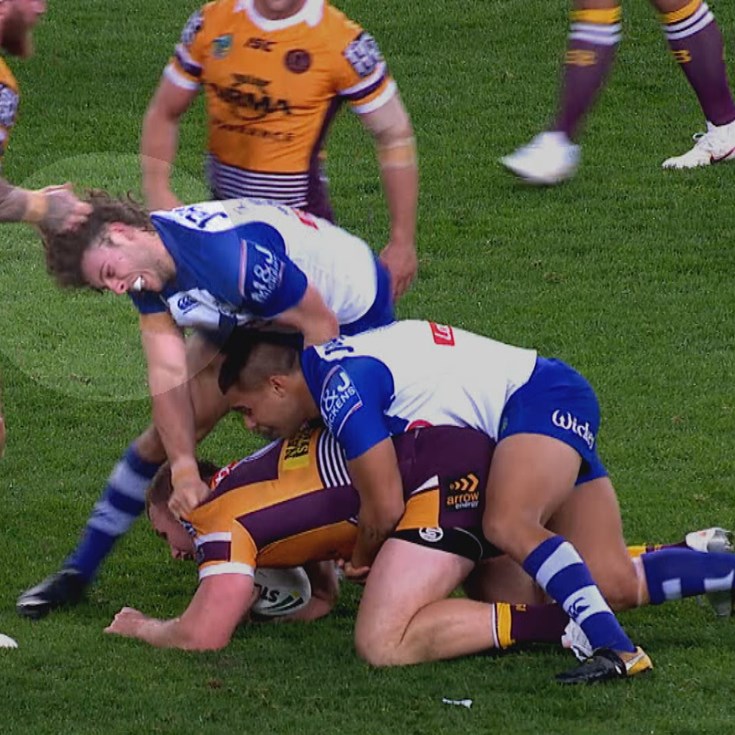