Gold Coast, a club building an impressive squad for the future, have slipped under the guard of Melbourne and secured another teenager of raw talent to join the likes of AJ Brimson, Phillip Sami and Moeaki Fotuaika.

Kea Pere, an 18-year-old who can play in the centres or on the wing, impressed earlier this year with Easts Tigers in the Intrust Super Cup after playing for Queensland under 18s in 2017.

A former Ipswich State High student, he is in the Storm system after playing Holden Cup last year for them. However, the Titans have snared him from next season to join a backline that is developing good depth with Anthony Don, Dale Copley and Brenko Lee re-signing last month to add to 2018 newcomer Tyrone Peachey, plus Michael Gordon, Konrad Hurrell, Brimson, Sami and Ash Taylor.

Titans coach Garth Brennan received a tip on Pere and then received a glowing recommendation from the club's former football manager Scott Sattler, who is an ISC commentator for Channel 9.

"He's a very good player and they're getting him at the right age," Sattler said.

"He's a very dynamic centre. He has a lot of speed but also very good evasive skills but can also play a real power game. The way the modern centre is going to go, he fits that mould perfectly.

"I know Melbourne were very keen to keep him so to get a player from the Storm system is an art within itself. He's a tremendous prospect.

"I first saw him play last year and was impressed with his raw ability and aggression. Then I saw him playing for Easts Tigers in the Intrust Super Cup this year and, while he was a boy playing against men, he wasn't out of his depth at all.

"There's so much development in him, they're getting a blank canvas that is built on natural ability."

The Titans may be out of the running for the finals but they have had success in developing young talent in the past three seasons – most from the south-east Queensland region.

Brimson has been outstanding at age 19, Sami – who may be suited to centre as he develops – has held his own on the wing this season and 18-year-old Fotuaika, picked up from an open trial, has been a revelation up front.

Max King debuted last year at 19 in the middle and has developed into a must-pick forward for Brennan, as has 21-year-old Keegan Hipgrave, who has just re-signed, with former Broncos Jai Whitbread, 20, having debuted in round 18 while 20-year-old Kiah Cooper has impressed at wing/centre for Tweed Heads in the ISC.

Yet the Titans have lacked an attacking edge out wide, an explosive player who can regularly break the defensive line. While Peachey provides that capability, whichever position the NSW Origin rep plays in 2019, Pere could also develop into that missing link.

Don and Gordon are the only squad members over 30, with Ryan James only 27, his best years are still ahead, along with Maroons duo Jarrod Wallace (27) and Jai Arrow (23). 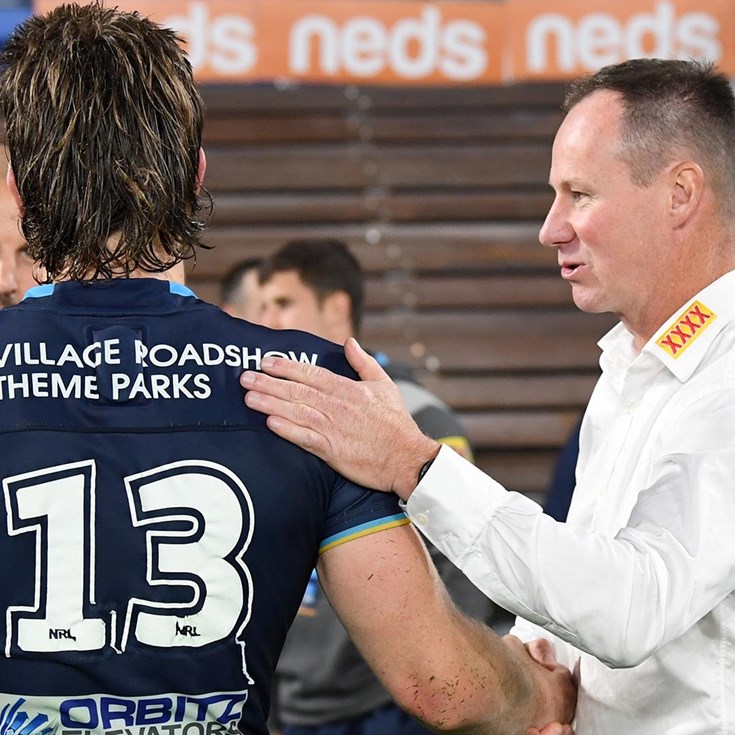 Spry’s on the rise