The Penrith Panthers have pulled off their third miracle come-from-behind win in three weeks with a Nathan Cleary extra-time field goal, snatching the match against the Titans 17-16 after being behind 16-6 with less than six minutes remaining at Cbus Super Stadium.

It was poetic that it was 20-year-old Cleary who sealed victory since he and his father Ivan had been in the headlines all week after Panthers sacked Anthony Griffin on Monday, bringing in his assistant Cameron Ciraldo as head coach.

Speculation swirled that Ivan would leave Wests Tigers and return to Penrith to coach next season and be reunited with his son. But he reiterated six hours before kick-off that he was staying put at the Tigers.

Nathan Cleary appeared to have put it all behind him anyway with a one-pointer that may keep the Panthers in top-four contention.

Cleary missed a conversion attempt right on full-time which would have given the Panthers an undeserved victory but he missed putting the icing on Dallin Watene-Zelezniak's try.

Early in extra-time, a 40-metre Cleary field goal attempt scraped the bottom of the crossbar. But the Titans, who were hardly any better in game management in an error-marred game, could not close out the game.

Ash Taylor kicked the ball dead with a poor field goal attempt, giving Penrith a seven-tackle set and Cleary did not need another invitation to pull off an incredible victory after his side had stumbled and bumbled their way through the first 74 minutes.

One thing was clear, if the Panthers powerbrokers sacked Griffin because they didn't think they could win the competition under him, Ciraldo has his work cut out ahead of him if the scrappy performance was any indication on Saturday.

Panthers fans who expected their team to come out firing, as is often the case after a coach is sacked, were terribly let down. Yet they don't draw pictures on the scoreboard, just record the result.

A constant succession of errors with the ball which saw them complete only 13 of 19 sets, miss 24 tackles and lose the penalty count 8-4 in the first half, meant hey squandered all but one chance to build any pressure - Waqa Blake's 13th minute try.

Their second half was little better ... until the familiar miracle finish emerged.

Fortunately for them, the Titans' ball control was no better for a good part of the game despite the fact they could not have had a better start to the match.

On the back of the first penalty Ryan James crashed over under the posts less than three minutes in to give them a 6-0 lead.

Penrith replied, against the run of play, through Blake's try. Sione Katoa darted out of dummy half near halfway and fed Reagan Campbell-Gillard who found Cleary backing up on the inside.

Cleary's pass went to ground but Tyrone Peachey picked it up on first bounce and threw a good long ball to Blake who just beat a covering AJ Brimson into the left corner. Cleary converted from out wide to level the scores at 6-6 in the last score of the first 40 minutes.

The Titans should have scored next after a great 80-metre bust by winger their best performer Anthony Don from inside his own quarter, after he beat James Maloney.

But he was rounded up by the Panthers scramble 10 metres from the line after being unable to link up with Taylor backing up. Then Konrad Hurrell had a brain snap on the next play, taking the ball too far before throwing a desperate pass forward.

Three times in the next 10 minutes they played on rather than kicking for goal but came up with no result. The closest they went was when Nathan Peats got over the line and had the ball stripped by Peachey. It went upstairs as 'try' but the Referees Bunker ruled than Peats had a second touch in the scramble and had knocked on.

The Panthers were playing without patience, committing error after error and skipper Maloney had been warned about his team's repeated infringements. That's when Jack Hetherington found himself in the sin bin and on report in the 33rd minute for a dose of stupidity.

He chased through a lost ball from a Trent Merrin forward pass and hit Brimson in the jaw with a swinging arm which could see him spend time on the sidelines with carry-over points from previous infringements.

Less than four minutes into the second half, the Titans finally had success – again off another Panthers error with the ball – when winger Phillip Sami crossed for a 10-6 lead.

Don, the intercept specialist, broke the Panthers back in the 60th minute when he latched onto a misdirected Maloney pass and ran 85 metres to score his 14th try of the season. That puts him one short of David Mead's career club record 67 tries. Elgey converted for a 16-6 Titans lead.

Penrith did not deserve to be in the match in the 75th minute when Dean Whare created a try for Cleary backing up, which put them within four points of victory 16-12.

With 21 seconds remaining, the Panthers looked like they were going to steal the game in regular time.

On the last tackle, they were obviously going to run the ball as Maloney slipped a long ball to Villiame Kikau, who offloaded to Blake into the clear and found Dallin Watene-Zelezniak inside.

But typical of the mistake-ridden game, Cleary missed the conversion from 10 metres to the left to send the match into extra-time.

News & Notes: Panthers forward Jack Hetherington is on report for a swinging arm on AJ Brimson ... Penrith skipper James Maloney missed six tackles (and made six) in the first half ... Kane Elgey, still searching for a club, played his first NRL match since round seven after fullback Michael Gordon was ruled out with a dislocated elbow (AJ Brimson went to fullback). Crowd: 11,283 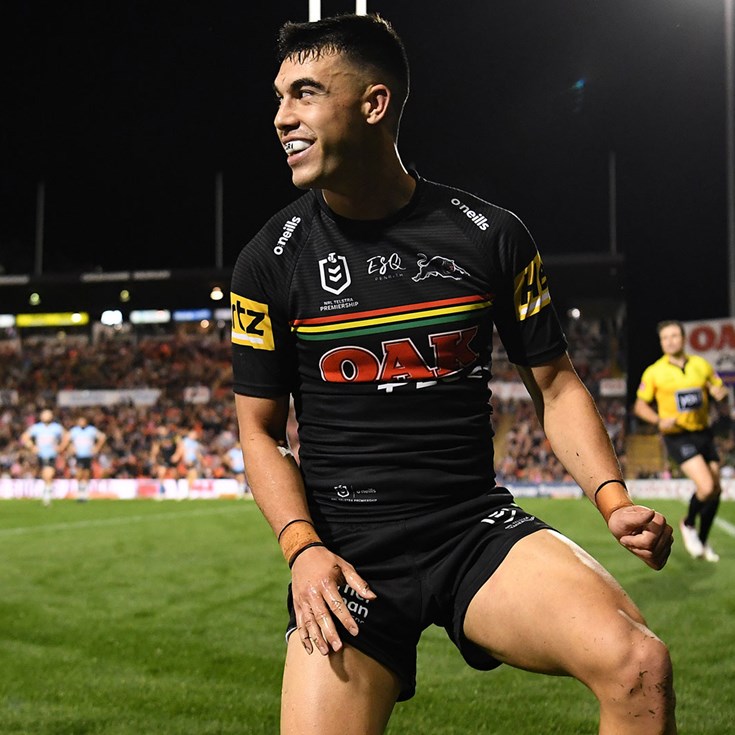