The Brisbane Broncos put 'barbecue-gate' behind them and were cooking with gas in a 38-18 win over South Sydney, which has given them a four-point buffer over the ninth placed Wests Tigers.

During a week where the future of Broncos coach Wayne Bennett has been the main topic of conversation in Brisbane, the players went out and certainly played for their coach.

Brisbane CEO Paul White is set to speak to the media at Broncos HQ on Friday morning about the coaching landscape at the club, but it was the players who let their footy do the talking against the joint competition leaders.

The Broncos led 18-0 in the first half and when the Rabbitohs surged back to level the scores 18-all in the second stanza the momentum seemed to have swung back their way, before Brisbane rallied.

The Broncos are now in seventh position on 28 points and have a better for-and-against than the Tigers, on 24 points, who take on the Dragons at Leichhardt Oval on Saturday.

The Broncos opening try in the fourth minute featured a superb cut-out pass from Darius Boyd to winger Corey Oates, a signature play the Brisbane captain has unfurled on many previous occasions.

It worked once, so Boyd tried it again mid-way through the first half and it worked a treat. Oates was on the end of the inch-perfect pass to score with Souths winger Richie Kennar once again out of position.

Anthony Milford, after a superb display of kicking in the first half, turned it on with a step to beat Damien Cook and send Korbin Sims over to give Brisbane an 18-0 lead after 26 minutes.

The Rabbitohs took 30 minutes to find their groove and a slick left to right play involving Adam Reynolds and Dane Gagai sent Kennar over out wide with Brisbane taking an 18-8 lead into the break.

Cody Walker lost the ball over the line early in the second half but relentless pressure by Souths led to another try out wide to Kennar after clever ball movement from Reynolds and Gagai again.

The Rabbitohs' short passing game was on song again when Hymel Hunt went in to level the scores at 18-18 in the 56th minute. Souths forwards appeared to have gained the ascendancy, but Brisbane found more gas in the tank.

Oates leapt high to snaffle a Milford bomb to give Brisbane the lead after a bullocking run by Tevita Pangai jnr changed the momentum of the game.

Teenage back-rower David Fifita burst clear soon afterwards and a few plays later it was Fifita again on the end of a left to right movement to score in the corner and give Brisbane a 30-18 lead.

When Kodi Nikorima raced away with an intercept try on the stroke of full-time the Rabbitohs were well and truly cooked.

The CEO's barbecue that the Broncos players left last Friday to join Bennett at his house may well now be regarded as a pivotal moment in the Broncos season, and one that bound the playing group together behind their coach.

That is how footy mythology works sometimes, but the Broncos win over the Rabbitohs was no myth and has revitalised their title hopes.

News & Notes: Interchange forward Korbin Sims has now scored four tries in his past three Broncos games.... Broncos winger Corey Oates has scored 12 tries in his past seven games against the Rabbitohs; it was also his first hat-trick of the year...the Broncos have won their past seven games against the Rabbitohs...Broncos forward David Fifita scored his first NRL try and became the first player born in the 2000s to do so...South Sydney's Mawene Miroti made his NRL debut. Crowd: 29, 241.

Oates gets a hat-trick 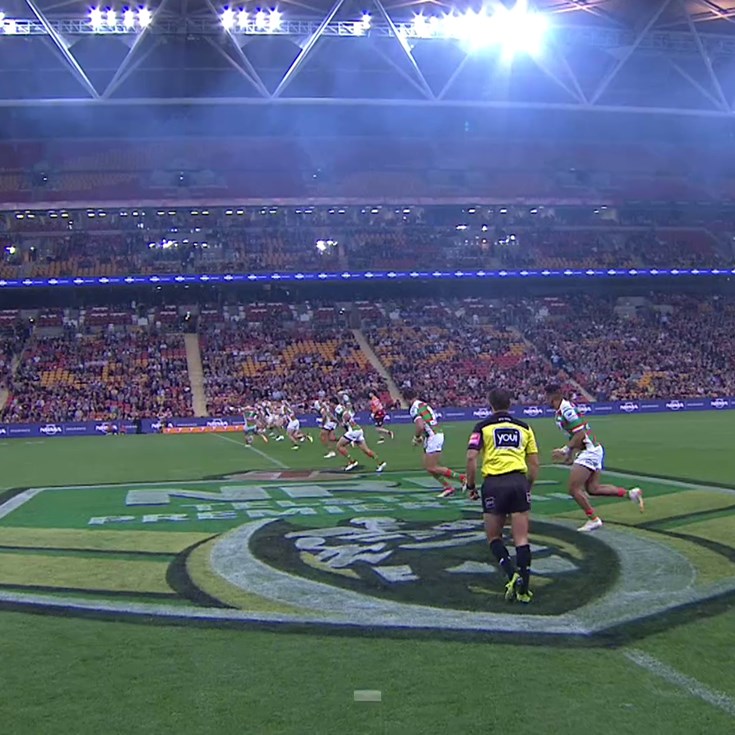