Johnathan Thurston ran out onto 1300Smiles Stadium for the last time holding hands with daughters Frankie and Charlie before helping the Cowboys run away with a 44-6 win against the Eels on Friday night.

His teammate Kyle Feldt did his best to steal a little of the limelight with a hat-trick, to take his season tally to 14 tries.

As fas as last stands go, the match had everything the fans wanted. Thurston got the send-off he deserved, his goalkicking playing a crucial part in proceedings including several sideline conversions, and even the Referees Bunker overturned an on-field ruling to deliver Feldt his third try of the night.

Cowboys co-captain Matt Scott also held hands with young sons Hugo and Will as he entered the field to mark his 250th NRL game. But it was Thurston's farewell night in his 322nd game. He plays his 323rd, and last, next week on the Gold Coast against the Titans.

And while we're into figures, this was Thurston's 100th victory in Townsville.

After accepting a gift from Eels co-captain Tim Mannah, Thurston thanked his family, coaches, teammates and fans before making a lap of honour as the capacity crowd held up their smart phones like torches.

Thurston may be retiring but he has seemingly passed the torch to young Jake Clifford, the five-eighth who notched up three try assists to Thurston's two.

The Cowboys were dominant from the first minute of the game, receiving the first of three consecutive penalties. The third allowed the Cowboys to take a shot at goal, which Thurston made no mistake with to open the scoring.

Parramatta didn't get to touch the ball until seven minutes into the contest, and when they did it was deep in their own half.

Stand-in fullback Ben Hampton, who came off the bench to start for the injured Te Maire Martin scored the first of the Cowboys seven tries in the seventh minute.

Four minutes later and Hampton backed up to score his second off the hot-potato hands of Kyle Feldt, Justin O'Neill, Coen Hess and Thurston.

Clifford did the lead-up work for his side's third try kicking across field to Feldt, who plucked the ball from the air to plant it safely.

Thurston againlet Clifford take the reins as he once again found Feldt, who pulled off some remarkable acrobatics to score.

After continuing to dominate the field position left side winger Gideon Gela-Mosby eventually found himself unmarked, and went 50 metres untouched to score, bringing the half-time lead to 32-0.

After the break Clifford registered his third try assist with a kick which was shadowed by the Eels, only for Feldt to come through and ground the ball centimetres before the dead ball line.

The Eels did little to help their situation, giving three consecutive penalties as the Cowboys attacked their line, the fourth saw Brad Takairangi sent to the sin bin.

Gavin Cooper didn't waste much time making it eight tries in his last eight games, before trying to field a short kick off from the restart and falling awkwardly in the 52 minute.

He left the field, and saw out the match on the sideline.

The Eels finally got onto the scoreboard in the 55th minute when Jarryd Hayne found himself unmarked and turned inside to Michael Jennings, who scored under the posts.

The quality of the game deteriorated as fatigue set in, but the Cowboys continued to have the lion's share of the field position. But at least the Eels defended well enough to prevent the Cowboys from reaching 50.

News & Notes: Cowboys prop Matt Scott has become the third Cowboy to reach 250 NRL games, after Johnathan Thurston and Matt Bowen ... Eels utility Brad Takairangi was sin-binned in the 51st minute ... Cowboys back-rower Gavin Cooper scored his eighth try in eight consecutive games to eclipse a 100-year-old record for forwards by Immortal Frank Burge (with 7) ... the Eels have lost all 12 away games this season and will collect the wooden spoon. 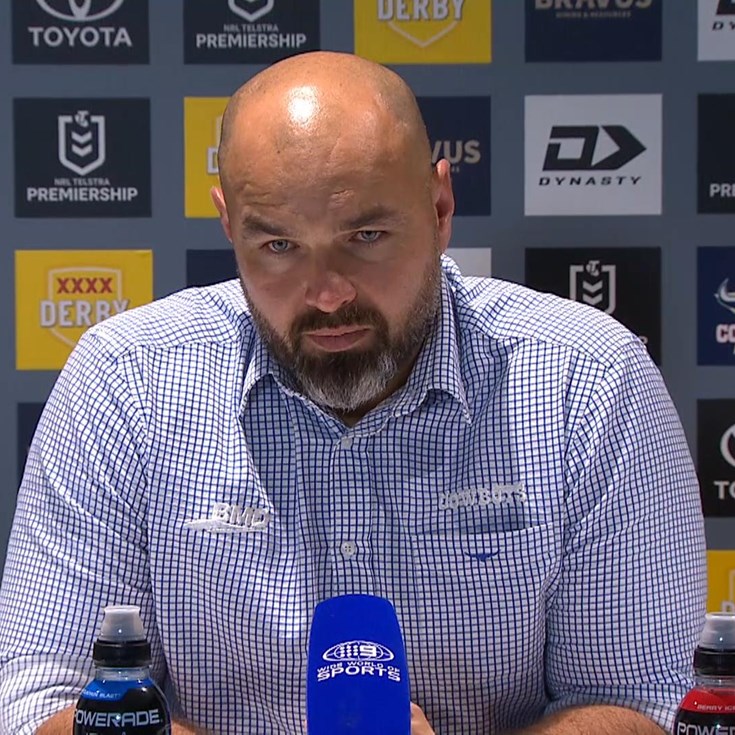