1. Darius Boyd: Brisbane's lack of ball in the first half meant Boyd was left out in the cold. Showed his class in the 52nd minute to slice through and give his side an outside chance of a comeback. 6/10

4. Jordan Kahu: Rarely seen in the first stanza and did not improve in the second, finishing with only six runs for the match. 4

5. Jamayne Isaako: Try-saving effort in defence in the first three minutes and showed no signs of nerves in his first finals game. Fell away in the second half matching his team's fortunes. 6

6. Anthony Milford: Solid kicking game early but failed to spark his side with their season on the line. 5

7. Kodi Nikorima: A line-break in the 17th minute allowed him to set up the first try of the game with a sensational solo effort midway through the second stanza. 6

15. Joe Ofahengaue: Left the field for a HIA in the sixth min after a heavy tackle with tackle Jack De Belin and did not return. 3

9. Andrew McCullough: Lost a ball in a tackle coming out of his own half which led to the Dragons scoring their first try. A team-high 37 tackles. 6.5

17. David Fifita: was busy on the right edge early and backed up well to score off a Kodi Nikorima  break. Was arguably Brisbane's best forward before an ankle injury saw him hobble off in the 57th minute. 7.5

12. Tevita Pangai jnr: Quiet by his standards through the first hour of the game and overall failed to bend the line. 5.5

13. Josh McGuire: Was vital in the middle of the field to help steer the younger Broncos forwards around with his dependable high work-rate seeing him make 36 tackles. Was less impactful in his second stint. 6

8. Matt Lodge: A fiery finish from the big prop. Never stopped trying but was outpointed by the Dragons front-rowers. 5

14. Patrick Mago: Provided excellent energy late in the game off the bench in only 13 minutes. 4.5

16. Korbin Sims: Ill-disciplined early with three penalties putting Brisbane under pressure. Poor defence on his line as he missed a tackle leading to his brother Tariq's third try. 3

18. Kotoni Staggs: Limited minutes late in the game when the result was already all but decided. 5

Lafai gets another Dragons try

1. Matt Dufty: Had limited opportunities to show off his speed in open space but was solid with his tidying up work at the back. 7/10

2. Nene Macdonald: Made 108m from nine powerful carries. Got his hands on the ball in the second half when his forwards needed a breather. 7

3. Zac Lomax: Composed performance from the teenager. Some nice footwork in attack and kept the Broncos speed men in check. 7

4. Tim Lafai: Stood up big time with one of his best games of the season. Made 67m in the first half and then ran over James Roberts to score a crucial try early in the second half. Always dangerous with ball in hand. 8

5. Jordan Pereira: Fairly quiet in the first half but made some strong carries in the second term and produced a huge run to get his team out of trouble with the Broncos pressing in the 64th minute. 6

6. Gareth Widdop: The captain's return brought composure to the Dragons and he took control to set up a huge lead. That was until he left the field with a shoulder injury in the 57th minute. 6

7. Ben Hunt: Sent his first kick long and looked nervous, but settled into the game nicely and took control with his kicking game when Widdop left the field. Nailed a 40-20 late in the match as his confidence surged. 8

8. James Graham: Set the tone early with a huge hit on Josh McGuire but was knocked out in the 25th minute trying to tackle Korbin Sims head on and did not return. 3

9. Cameron McInnes: Got through plenty of work in defence (36 tackles) and kept the middle tight for the Dragons. 6

10. Leeson Ah Mau: A powerhouse effort to nullify Brisbane's much-vaunted pack. Set the tone with a superb first stint and grabbed his second try for the season in the 28th minute. Finished with 147m from 14 hit ups and 27 tackles. 9

11. Tyson Frizell: Another Origin forward who stood tall when his team needed him most. Recovered from early mistake to churn out 132m and made a mark in defence with 21 tackles. 8

12. Tariq Sims: A stunning performance from the Origin back-rower as he terrorised the Broncos' right edge to grab three tries in the first half. Ran straight over brother Korbin for his third try and celebrated like he'd just won a grand final. Will now take aim at the Burgess brothers. 9

13. Jack de Belin: Came in under an injury cloud and looked proppy early. A bad missed tackle on Kodi Nikorima led to Brisbane's first try but he ripped in to his defensive work and ran strongly before limping off in the 52nd minute. 5

14. Jeremy Latimore: Entered the match when James Graham was knocked out and showed all his experience to make a solid contribution in attack and defence. Got through 13 hit ups for 114m. 7

17. Luciano Leilua: Grabbed a try late in the game and showed again why he's an X-Factor for the Red V. 5 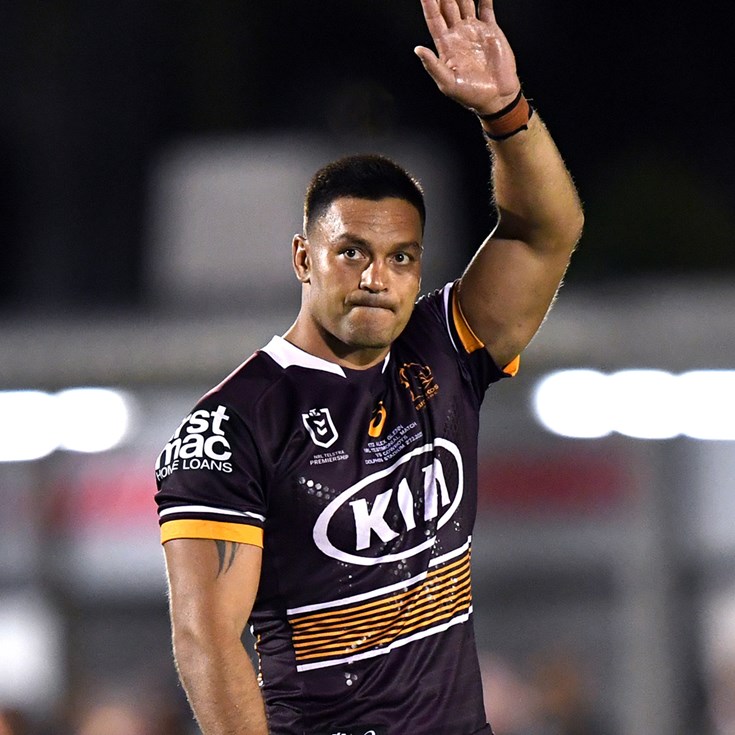 Bird on edge before taking off again