Brisbane have powered their way through the Sydney Roosters in rampaging fashion to be crowned inaugural NRLW champions with a 34-12 victory at ANZ Stadium on Sunday.

It was a tight tussle early but a crucial four-minute period proved the turning point as the Broncos were awarded a penalty try before putting their foot down to race to a 28-6 lead at half-time.

Broncos five-eighth Kimiora Nati, who took out the Karyn Murphy Medal as player of the match, was awarded her second try of the afternoon through foul play with Roosters winger Taleena Simon ruled to have illegally used her leg to jolt the ball free in a try-scoring situation.

The decision seemed to break the Tricolours' spirit as the Broncos laid on a further two tries in quick succession.

Brisbane's big names Ali Brigginshaw, Brittany Breayley and Chelsea Baker were pivotal, while Nati completed a strong game to go over for a third try of the afternoon in the only Broncos try in the second half.

"From the moment this team came together as a group it had that special feeling," Broncos coach Paul Dyer said after the game.

"They went out there and did what they have done for the last three weeks. They executed their plays, had moments where they were a bit poor but as a general rule they were very good."

The Roosters will rue the mistakes they made on the sets immediately after scoring points.

The Tricolours struggled to make yardage as the Broncos stepped up in defence but back-to-back penalties got them in strong enough field position to level at 6-6 earlier in the day.

A cross-field kick from Zahara Temara turned into gold with the ball coming off Simon's head and into the hands of Tazmin Gray to get over the line.

Experienced props Elianna Walton and Ruan Sims came up with errors after points in coach-killers for the Roosters that led to the Broncos bouncing back with Nati's first weaving effort.

"I think they came with a plan to bully us through the middle and they got some joy there," said Roosters coach Adam Hartigan.

"We held our own in the second but leaked a lot of points in the first half unfortunately. Looking back now we were just happy to be there rather than willing to compete. There was effort there but it definitely wasn't good enough."

Retiring Broncos forward Heather Ballinger capped a fine career to step past Sims and reach out over the line for a 12-6 lead.

Brisbane continued to excel with Brigginshaw placing a kick in the in-goal for Nati's penalty try extending the lead to 12, before Broncos wrecking ball Ngatokotoru Arakua ran onto a short pass from Breayley to crash over the line a short time later.

Baker showed her skill late in the half to split the defence on the left edge and find Lavinia Gould in support.

"That first half set us up," Brigginshaw said.

"It felt like such a team effort, from 1-17, it didn't matter who got the ball we knew what we were doing. I'm sure people watching that could see we were clicking and defensively we all did our job.

"It's such a great feeling."

The Roosters needed to be first to cross in the second half and did so through Lavina O'Mealey, another veteran set to hang up the boots this season. She showed sharp footwork to weave over the line in front of a strong 16,214 crowd.

Nati completed her hat-trick in the 45th minute to ensure there would be no fairytale comeback by the Roosters.

In a further concern for the Tricolours, Isabelle Kelly (MCL) and Taleena Simon (ankle) suffered injuries.

Roosters back-rower Vanessa Foliaki was also placed on report for a dangerous throw in the second half.

News & Notes: Kimiora Nati was awarded the Karyn Murphy Medal and becomes the first player to score a hat-trick in a NRLW grand final ... Nati was awarded a penalty try in the first half ... Isabelle Kelly (MCL) and Taleena Simon (ankle) suffered injuries out of the clash ... Crowd: 16,214. 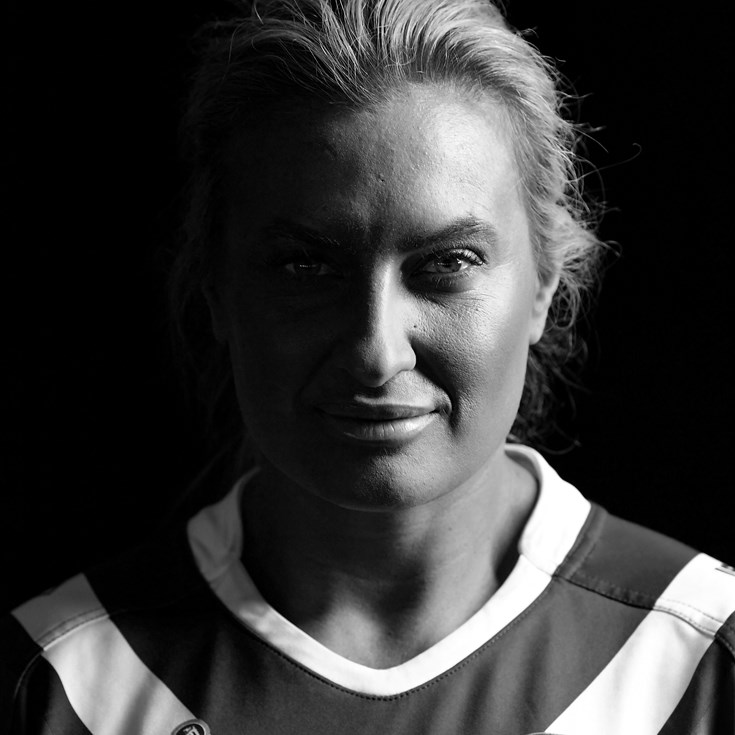