Cooper Cronk was brought to the Sydney Roosters to win a premiership and, on Sunday night – with one arm dangling uselessly by his side – he did just that.

He came and he delivered, albeit barely able to lift the same trophy he did in opposition colours 12 months ago.

Cronk helped destroy his old club's hopes of becoming the first team in 25 years to win back-to-back titles as the Roosters celebrated a 21-6 victory inspired by the performance of five-eighth Luke Keary.

For the best part of a week the rugby league universe revolved around the shoulders of two of the sport's biggest names.

On Tuesday night one shoulder, that of retiring legend Billy Slater, was controversially cleared to take part in the decider.

The other, that of Cronk's, was shrouded with the type of secrecy that has become synonymous with every significant decision in the halfback's career.

The high shot from the helicopter hovering over Allianz Stadium the day before the decider suggested what Cronk first said – a long shot.

Even when he hopped off the team bus in the confines of ANZ Stadium two hours before kick off, avoiding the high fives from the children in the tunnel, people were still wondering 'will he or won't he?'.

Technically, he did. For 78 minutes he did. But as Phil Gould so eloquently put it, the Roosters were playing with 12 men and a coach.

A coach that knew every strength and every weakness of the 17 men wearing the jersey he donned for 14 seasons before love lured him to Sydney.

A coach who knew where the opposition wanted to be, when they wanted to be there and how they were going to do it in front of a crowd of 82,688.

As much damage as Melbourne inflicted on Cronk's left shoulder, the Roosters No.7 returned serve with the power of his voice.

He barely touched the ball. His one pass looked like something out of an under 6s game, but what he wasn't able to do, Keary filled in with class and precision.

As much as Cronk's heroics were impossible to ignore, the Roosters five-eighth was the real star of the show.

A show that ended with Slater walking off stage for the last time.

Slater's career comes to a close

It was a penalty goal that opened the scoring for the Roosters, but they didn't have to wait too long for their first try of the evening after a floating cut-out pass from Keary put Daniel Tupou over in the corner for a 6-0 lead after eight minutes.

In the four occasions Will Chambers and Latrell Mitchell have squared off this season, Mitchell put huge dents into the once impeccable reputation Chambers held in the game.

If there had been any doubt as to the changing of the guard when it comes to the game's premier centre, the ease in which Mitchell brushed past Chambers to score the Roosters' second try was confirmation.

The cheeky, albeit unnecessary, push over the sideline into the advertising boards from Mitchell on Chambers 10 minutes later was just the youngster's way of letting him know.

Suddenly the best defensive team in the competition had a 12-0 lead after 15 minutes.

The Storm's nightmare start got even worse soon after when Cameron Munster was sent to the bin for a professional foul on a runaway Jake Friend, allowing Mitchell to boot the Roosters to a 14-point buffer.

On the stroke of half-time Tedesco combined with Joseph Manu to produce the Roosters' third try of the night, heading into the sheds with an 18-0 half-time lead.

Time looked like it would deny the Storm any hope of a come-from-behind victory, but against the run of play Josh Addo-Carr pounced on a looping Keary pass to run 85 metres and reduce the deficit to two converted tries with 17 minutes on the clock.

But when Keary landed a field goal with 10 minutes remaining, there would be no fairytale finish for the Storm or Slater.

It ended with a brain explosion from Munster, sent to the bin for a second time after kicking Joseph Manu in the head. He was placed on report and could be at risk of suspension in Australia's end-of-year Tests against New Zealand and Tonga.

That's when the party started, as Cronk left the field with nothing to give but a trophy to the club that turned its team upside down to get him.

News & Notes: Cameron Munster became the first man since Canterbury's Terry Lamb in 1995 to be sin-binned in a grand final… Cooper Cronk became the first man to win back-to-back premierships at two different clubs since Johnny Mayes did it in 1973-74 with Manly and Easts… Cameron Smith played in his 36th finals match, eclipsing Darren Lockyer's record of 35… Storm lock Dale Finucane left the field for an HIA midway through the second half. He passed and returned to the game… Crowd: 82,688. 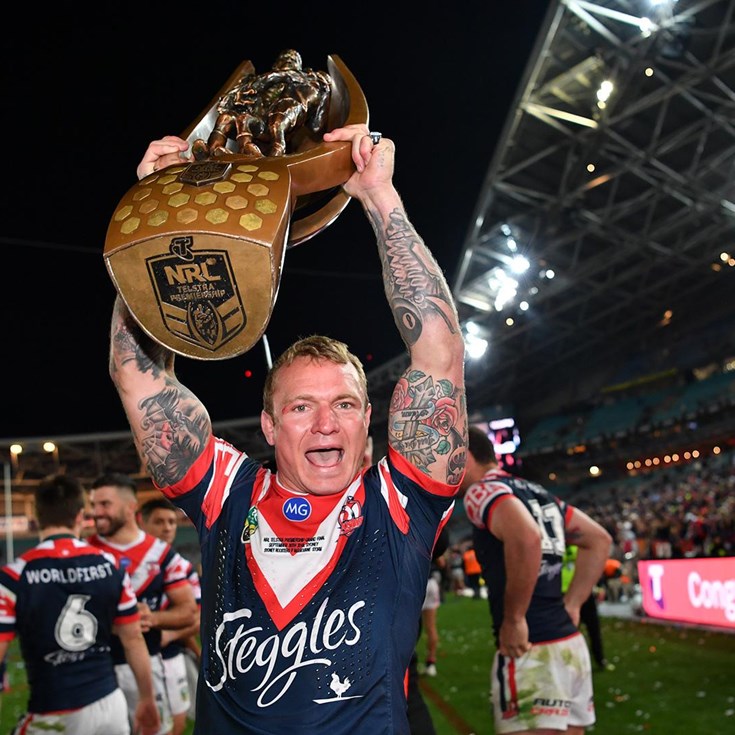