Newcastle recruit James Gavet is feeling warm and fuzzy about his footy once more after he claims he was told he would spend 2019 in reserve grade if he had stayed at the Warriors to see out a sizeable back-ended contract.

Gavet signed a two-year deal with the Knights last November little more than a week after first talking with Nathan Brown, having spent most of his post-season break preparing to stay in Auckland.

The 29-year-old prop has impressed plenty in the Hunter and is being tipped to start the season up front alongside star signing David Klemmer.

Despite starting 17 of 19 games last season and having a year to run on his Warriors deal, Gavet told NRL.com the club forced him out to alleviate salary cap pressure.

"They said they were happy with me to play until the end of the season and then they ended up needing to push a couple of players out just because of couple new signings they had made, a few boys having their contracts upgraded including mine," Gavet said.

"I was going to be on close to double what I was on last year so I think it was just a safer option for them to free up some money.

"…It's a business at the end of the day and it's the way the cookie crumbles.

"I've been around the traps for a while so I hold no bad blood over it, but I was looking forward to that big contract coming into fruition after all the hard work I've put in.

"They don't get rid of you but they force your hand and in the end they tell the media that 'he left and he was a bad trainer' and whatnot."

Newcastle will be Gavet's fifth club in a 56-game NRL career, with 42 of those appearances coming for the Warriors since 2016.

The Samoan international was dropped by the Kiwi franchise for their last regular-season game in 2018 after reporting late to training and club functions but returned to the starting side for their finals loss to Penrith a week later.

Warriors CEO Cameron George denied that ill-discipline played a part in Gavet's release, and declined to comment on the prop's claims he was pushed out of the club or faced demotion to the Intrust Super Premiership.

"There's no drama from us in terms of James," George told NRL.com.

"I found James a terrific person. A good club man and obviously from the coach's perspective the opportunity arose with Newcastle and whatever discussions they had with him, it was the best option for him to go to Newcastle.

"That conversation [about Gavet's first-grade prospects] wouldn't happen with myself. Any conversation he had would've been with the coaching staff no doubt around the football side of things.

"From my perspective James was a terrific contributor to the club, he was a fan favourite and he did good things. I wish him all the best and I'm sure he'll do great."

The Knights travel to Auckland in round eight to take on Gavet's old side.

Should Gavet make the trip, he'll do so with a new lease on his footballing life after linking with Brown and a Newcastle outfit expected to challenge for their first finals appearance since 2013.

The journeyman forward left behind two young children in Auckland to continue his NRL career and only met Brown at Newcastle Airport given the sudden nature of the move.

"I spoke to Brownie only over the phone before committing, and I met him eventually when I flew in," Gavet said, with the Knights ongoing rebuild in the end making for a successful sales pitch.

"I'm really enjoying being under Brownie. He's helping me grow as a player. I'm not the youngest player anymore but it's funny, as soon as you think you're getting a handle on the dos and don'ts, there's always more to learn and something you can take from someone like Brownie.

"There were other clubs that were interested. A few Super League clubs, a couple of NRL clubs but we heard about the direction that the Knights were moving in and we were ready for a change up and to venture out.

"I'm feeling as if my footy career would grow further here than it would at the Warriors even if it meant that I had to cop moving away from family again.

"Leaving my two kids back in Auckland was a big decision to make but we've been in contact and my parents and all my loved ones are happy for me." 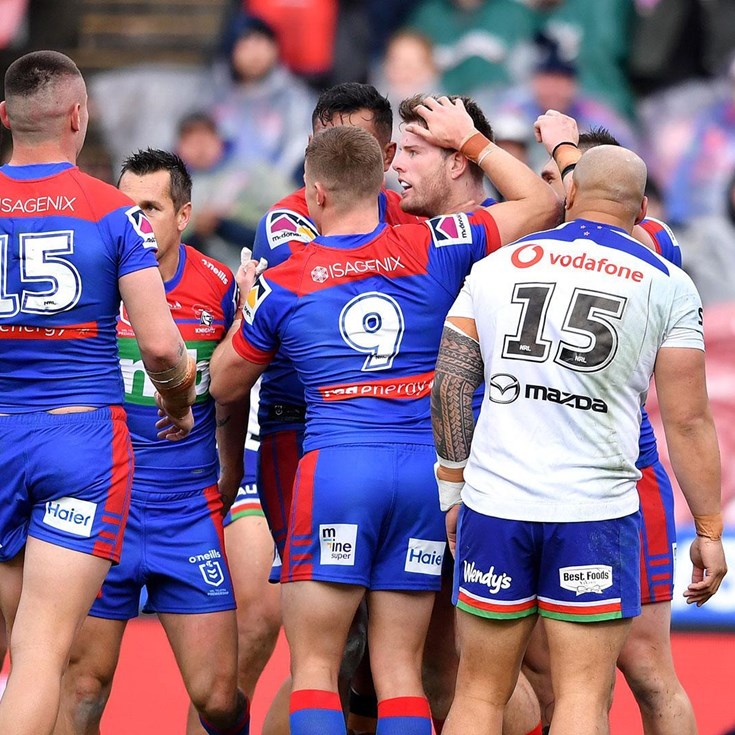