Angus Crichton scored his first try in Roosters colours and captained the side all in a night’s work at Central Coast Stadium but it wasn’t enough to stop a second-string Manly side winning 38-20.

The seven-tries-to-four victory had NRL implications for the Sea Eagles only in the first half when coach Des Hasler put both five-eighths Trent Hodkinson and Kane Elgey in the halves.

One of them will partner Daly Cherry-Evans in the round one date with Wests Tigers at Leichhardt Oval on March 16. But just who that will be remains a mystery.

Elgey at halfback set up second-rower Jack Gosiewski with a kick in behind the defence and had some slick passes in attack. Hodkinson’s positional kicking was spot on and he landed three from three conversions.

That could present another headache for Hasler as to who he uses as first-choice goalkicker.

But with no Cherry-Evans on the field tonight it is hard to fathom Hasler’s future plans.

Stand-in fullback Brendan Elliot capably filled the No.1 spot so it looks like he will take over Tom Trbojevic’s job as he nurses his left hamstring. But apart from those small cameos, the rest of the playing squad was mainly Intrust Super Premiership players.

Lebanese international Abbas Miski scored a double for the Sea Eagles on the left wing, and could have had a hat-trick if not for an obstruction ruling.

For the Roosters, winger Matt Ikuvalu, who played three NRL games in 2018, scored a brace but that won’t be enough to displace Daniel Tupou or Brett Morris from their positions.

Manly and the Roosters meet in round two of the 2019 Telstra Premiership but the sides then will bear little resemblance to the two teams that did battle in Gosford.

Most of Manly’s NRL regulars were on hand, but they were all seated in the Sea Eagles players’ box on the western side of the ground.

At least they were safe there. The Sea Eagles lost three players in their first trial a week ago against the Sharks – Trbojevic and props Taniela Paseka and Kelepi Tanginoa (knees) – so Hasler wasn’t taking any chances of further damage.

Still Trbojevic was up and around at halftime throwing passes down on the sideline with Dylan Walker.

Manly struck first through back-rower Corey Waddell in the 10th minute and finished the opening 40 with an 18-10 lead after three converted tries.

Crichton’s four-pointer came five minutes after the break and came off a wonderful short pass from Lachlan Lam to send the former Rabbitoh on an angled 25-metre run untouched.

Both clubs have had their NRL-strength hit-outs earlier. Manly fielded a probable round one side in the first half against the Sharks a week ago, as did the Roosters in their 20-8 win over Wigan in the World Club Challenge.

In a true reflection of the priority to rest his stars, Roosters coach Trent Robinson played none of his grand final 17 in Gosford. 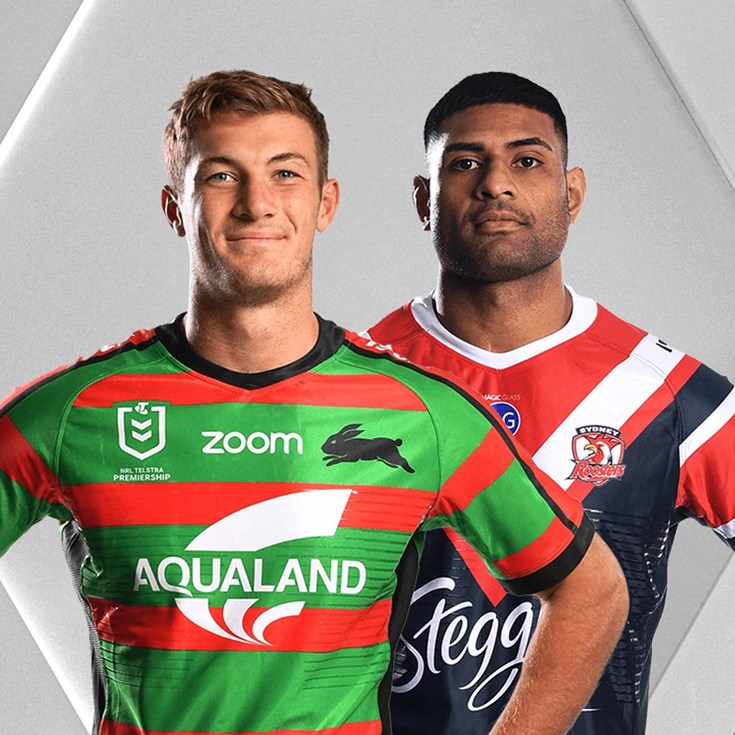