The Raiders rolled the Cowboys on Saturday night in Townsville at 1300 Smiles Stadium, running in five tries to two to claim their third win of the season.

In a game the Cowboys were desperate to win, the Raiders came out of the blocks early on and looked dangerous from the get-go.

First points for the Raiders came in the fourth minute after a knock on from the Cowboys’ Javid Bowen 10m out from their own line.

Canberra winger Nick Cotric scored soon after in the corner to give the visitors a 4-0 lead.

Minutes later the Raiders tried their luck down the right edge and scored a try through Jordan Rapana after a fumble by Bowen.

The errors kept coming for the Cowboys with young half Jake Clifford kicking the ball out on the full to hand possession back to the Raiders just a minute later, but Canberra had a few errors which allowed the Cowboys to gain possession.

After a couple of penalties back to back, the Cowboys had their chance to post first points, but the Raiders defence held tight. The play eventually shut down after Hooker Jake Granville kicked a wayward grubber.

Prop Matt Scott fumbled the ball in the 17th minute, handing the Raiders possession once again.

But they were unable to turn it into points, as Jordan Mclean cleaned the ball up right in front of the uprights.

A few minutes later, Michael Morgan kicked out on the full. The Raiders came close to posting points but Bowen redeemed himself, taking the ball out of play,

After two repeat sets, Cowboys hooker Jake Granville was penalised and the Raiders opted to take the two and extend the lead to 10 points.

Jack Hodgson made a rare error kicking the ball out on the full in the 26th minute.

The Cowboys had repeat sets but still came up empty-handed until the 31st minute when Michael Morgan popped one to Gavin Cooper to cross.

After some brilliant running from Francis Molo and John Asiata, which lead to a penalty, the Cowboys marched up the park, coming close to the line, but again last play options killed the momentum.

The Raiders responded with the forwards laying the platform which saw some brilliant ball-work from Charnze Nicoll-Klokstad.

He found Rapana, who kicked it to the inside for Joseph Leilua to plant the ball under the posts in the 35th minute. Jarrod Croker added another two for a 16-6 half-time lead.

The second half started much the same as the first. After a hand on the ball from Coen Hess, the play went in favour of the Raiders, who took a penalty kick in the 43rd minute, extending the lead by a further two points.

The Cowboys struggled to get out of their half, but off a penalty, they were able to get close to the line, but Michael Morgan coughed up the ball only metres from the line.

After a Michael Morgan bomb in the 52nd minute, the Cowboys were able to drag Nicoll-Klokstad back into the in goal area to grab another set. Morgan, stepping off his left foot, was able to throw an inside pass to John Asiata who fell over the line. Jordan Kahu's conversion cut it to 18-12.

Shortly after the Cowboys found some spark in attack and were winning the battle on the field. In the 61st minute a ball handling error from Cotric turned the ball over in the middle of the park fifteen out from the Raiders’ line, but the Cowboys were unable to capitalise.

After a Hodgson steal on Nene McDonald, the Raiders got the ball back and kicked out on the last, giving their forwards the chance to take a breather.

The errors from both teams were starting to mount with Jordan Rapana knocking the ball on in the 67th minute, Jake Clifford following suit a few minutes later.

Matters were made worse with a Mitch Dunn knock on, which ended with a try to Croker, who converted for a 24-12 lead with eight minutes to play.

To add insult to injury, the Raiders were turning the Cowboys inside out, making way for Rapana to post his second try of the match just left of the uprights after a charging line break.

Croker by his standards had an average night with the boot (3/5), adding another couple to extend their lead and bank two points on the road. 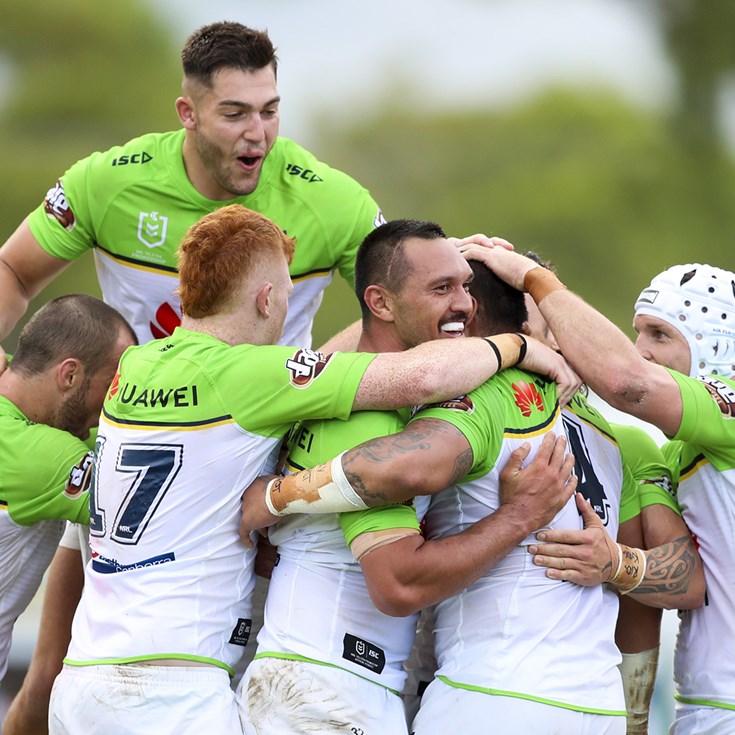