Roosters five-eighth Luke Keary and centre Latrell Mitchell revealed they had been planning for weeks the play which resulted in Mitchell’s stunning try after the halftime siren in Saturday night’s 30-16 defeat of Cronulla at PointsBet Stadium.

With Sharks five-eighth Shaun Johnson giving possession to the Roosters by kicking after a scrum win less than 30 seconds before halftime, Keary seized on the opportunity to put the play into practice and kicked for an unmarked Mitchell on the sideline.

The Australian centre caught the ball as the match clock hit zero and accelerated past teenage Cronulla speedster Bronson Xerri before outrunning Sione Katoa and Josh Dugan in a 60-metre sprint to the tryline.

“Me and Latrell have been talking about it the last couple of weeks and it was just good timing,” Keary said. “I knew the time so I knew that if it didn’t work it wasn’t going to be an issue but it was good to see the big fellow in full flight.

“I love seeing him in the clear, he reminds me of GI [Greg Inglis] when he runs. I thought he had some real good touches tonight and he has built over the last few weeks.”

Mitchell said the pair had never rehearsed the move but they had talked about how defences often squeeze in and leave space near the sideline to exploit with a cross-field kick.

“Luke just gave me a look and I pretty much caught it off the back of instinct,” Mitchell said. “I held my width and Luke put it on a platter for me.

“We have discussed it but that was probably the first time we have executed it. That’s my first try of the year so I am pretty happy.”

The try sparked the Roosters into action and they exploded after halftime with three tries in nine minutes to blow the game open.

“Only some guys can catch that ball on the sideline,” coach Trent Robinson said. “They feel the pressure of that kick and he executed that. Bronson Xerri is fast but Latrell when he is in the open, he is very, very fast.

“That was a nice thing to see him open up. I thought Latrell had some moments tonight that really busted them open.”

Robinson was pleased with some of the attacking brilliance displayed by his team but disappointed at the 14 errors they committed – nine of which were in the first half.

“It’s mixed emotions about how I am feeling about it,” Robinson said. “I would have said there was 40 minutes of high-end footy and 40 minutes of average footy from us."

The Roosters now line up for a classic Good Friday showdown with the only unbeaten team in the competition, the Melbourne Storm. 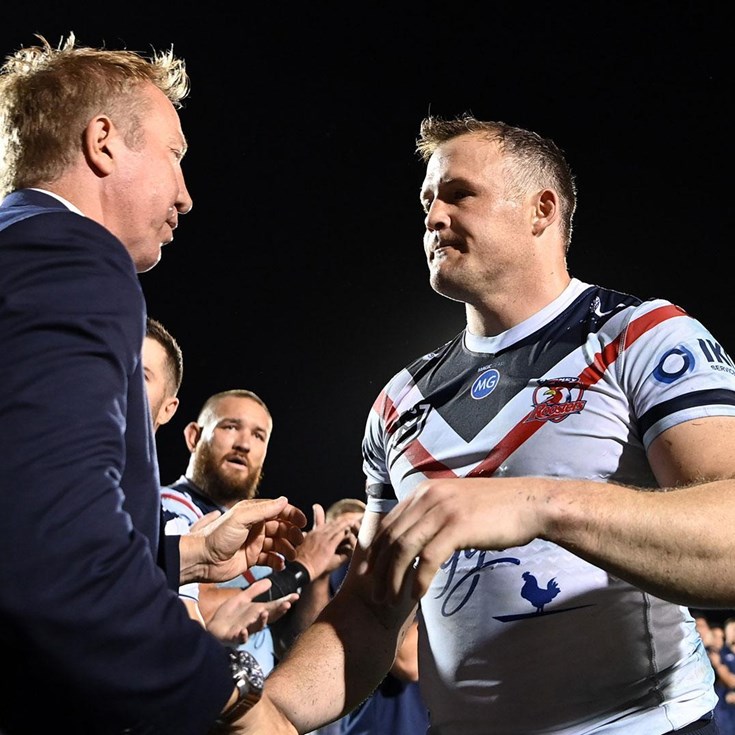 Long-game: Robinson building an NRL player out of Walker

Honour in turmoil: Robinson beaming with pride after year of constant challenges

Josh Morris given guard of honour after final NRL game