The Sydney Roosters have survived a stunning Melbourne Storm comeback to emerge with a courageous 21-20 golden point victory thanks to a stunning Latrell Mitchell field goal at AAMI Park on Friday.

The Roosters surged down field in the first set of golden point courtesy of a magnificent run by Sitili Tupouniua before Mitchell seized the moment to land a left-footed shot from 40 metres out to sink the Storm.

It was billed as a blockbuster Good Friday clash between the two best teams in the competition and the grand final rematch lived up to the hype as the Roosters ran hot to lead 20-0 before Cameron Smith orchestrated an epic revival.

A try to Josh Addo-Carr just before half-time and two more early in the second stanza through Tui Kamikamica and Curtis Scott helped the Storm tie the scores at 20-20 and set up the grandstand finish.

With a parochial home crowd of more than 17,000 cheering them on it looked like the Storm were going to pull a rabbit out of the hat and stay undefeated in 2019, but Mitchell kept his cool and expertly slotted the one-pointer in the first minute of golden point to seal victory.

Mitchell terrorised the Storm defence all night, with the electrifying centre taking a particular liking to the left-hand side of the Melbourne defence by scoring the opening try of the night and setting up James Tedesco for another.

Mitchell field goal wins it for Roosters in golden-point

But Mitchell wasn't the only Rooster to put in a dominant performance, with Luke Keary and Cooper Cronk combining well in the halves and Jared Waerea-Hargreaves scoring a try in an impressive return from injury.

Cronk received some early jeers from the pro-Melbourne crowd in his first game back at AAMI Park since his move to the Roosters, but the former Storm playmaker had the last laugh as his new team claimed the two points in a pulsating contest.

There were pieces of individual brilliance, bruising defence, scintillating attack, an old-fashioned dust-up and a brilliant comeback that was thwarted by Mitchell's magical one-pointer as the Roosters reaffirmed their status as the NRL's top dog.

It was a win built on character as the premiers overcame the loss of centre Joseph Manu to suspension and the late withdrawal of prop Sio Taukeiaho who was injured during the warm-up.

The Roosters were forced into a major reshuffle and handed debuts to Josh Curran and Sam Verrills while golden point hero Tupouniua was playing just his second game in the NRL. 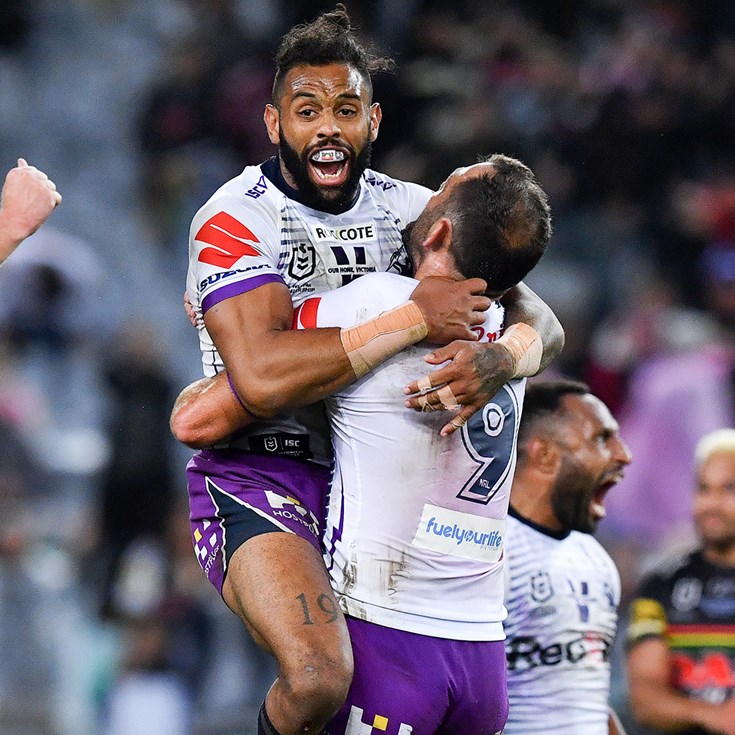