Gold Coast have overcome the loss of captain Ryan James and back-rower Kevin Proctor to record a 38-14 defeat of the Knights at Cbus Super Stadium.

Although the final scoreline is a convincing one there were nervous moments throughout the second half for the home side as Newcastle's Mitchell Pearce and Kalyn Ponga threatened to engineer an unlikely comeback.

In front of an Easter Sunday crowd of 11,654, the Titans went into the break with a 22-0 advantage, their best opening half since they put 30 points on the Raiders in the first half in their round two clash in 2013.

They lost Proctor after the warm-up with a quad injury while James lasted just 12 minutes before a collision close to the Newcastle line saw him helped from the field with a knee injury. Scans on Tuseday will determine how long he will spend on the sidelines.

"It doesn't look good, just the way he fell down with not too many people around him," Titans coach Garth Brennan said.

"He was in a fair bit of pain. From all reports it doesn't look positive."

Twice the Titans - who have now won two straight following a four-game losing streak to start the season - were forced into a dramatic reshuffle in the first half due to injuries but regular Knights errors meant that they were never exposed defensively.

The Titans took a stranglehold on the contest when they made the Knights pay the ultimate price for two errors in the space of two minutes.

A misdirected Danny Levi pass saw Titans replacement Phil Sami sent on a 60-metre run to the south-east corner and then a spill by Newcastle prop Daniel Saifiti put the Steeden into the hands of Ash Taylor.

The Titans No.7 immediately went wide to Tyrone Roberts who straightened and out-paced Mitch Barnett to score for a 14-0 lead through 21 minutes.

A surprise inclusion on the bench in just his third game of the season, Sami ran for a total of 239 metres and came up with his second big play of the first half a few minutes before the break.

After a Knights kick into the in-goal was cleverly shepherded across the dead-ball line, Sami took the tap restart and again eluded the Newcastle defence. He wasn't rounded up until the 20-metre line at the opposite end.

The Knights defence never fully recovered and a simple left-foot step saw Brian Kelly slice touch down under the posts.

If two bombed tries in the opening seven minutes of the second half didn't destroy Newcastle's confidence completely their next error certainly did.

Coming out of their own end, winger Shaun Kenny-Dowall threw a wide pass that Edrick Lee couldn't control.

Titans centre Dale Copley picked up the loose ball and sent Anthony Don on his way and the Titans to a 28-0 lead. It was the third try directly from a Newcastle mistake.

Two weeks after moving Ponga back to fullback, Newcastle coach Nathan Brown made a further adjustment to his spine pre-game, dropping Mason Lino out of the 17 altogether and partnering Connor Watson with Pearce in the halves.

The change had no obvious benefit in the first half but the second term was more encouraging.

A Ponga bust in the opening minutes could have led to a try had Watson not dropped the pass back on the inside while Pearce did everything but get the ball down when he challenged the Gold Coast defence in front of the posts.

They eventually found success on the left when Watson put Hymel Hunt across in the 55th minute and were unlucky not to score again soon after, Pearce and Watson both denied in the following five minutes.

Sami breaks away down the left

A desperate dive from Mitch Barnett – and a lax Tyrone Roberts – earned the Knights a well-deserved second try with 18 minutes left to play and when Ponga delivered what he had been promising all game four minutes later with a scything 40-metre run to the try-line the home side’s advantage had been reduced to 14 points.

With every set, the Knights threatened to further lessen the gap but they had simply started from too far back, Roberts scoring his second try three minutes from time and Gordon adding the final exclamation point seconds before the siren sounded. 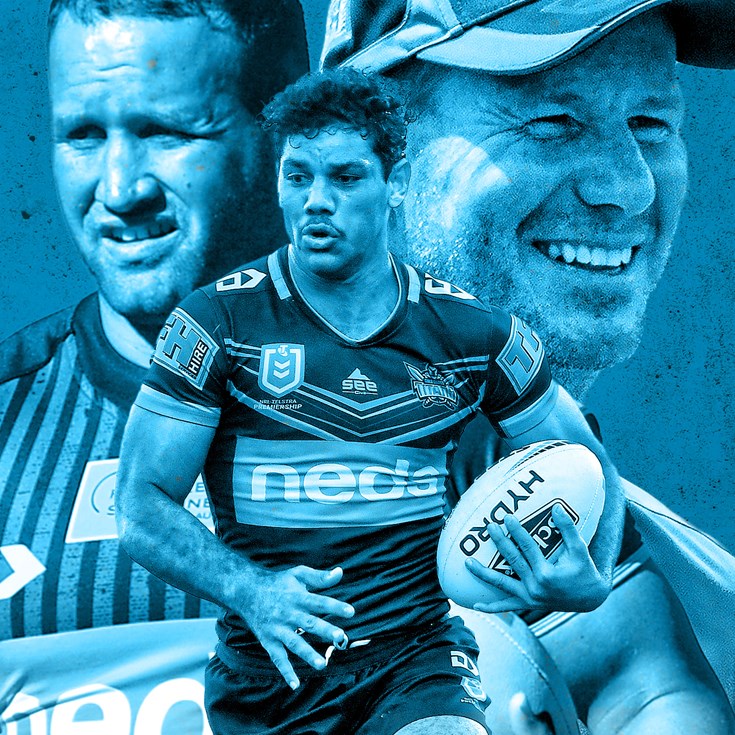 Titans not using halves’ injuries as an excuse