Besides acknowledging the impressive way the Roosters had begun their 2018 premiership defence, McGregor's praise was his way of pointing out that the Dragons are going alright too.

He delivered the same message in the SCG dressing rooms after his side’s 20-10 Anzac Day loss.

The Roosters are on track to become the first team to win back-to-back grand finals in NRL history after their best start to a season in 20 years.

However, the character shown by an undermanned St George Illawarra to fight back in the second half suggests they will also be among the premiership contenders.

The win was the Roosters' fifth against another team in the top-eight and sixth in succession since their opening round loss to South Sydney. It has them placed better than in recent seasons, when they have started slowly and peaked closer to the finals.

In contrast, the Dragons have started the past two seasons in top form and led the Telstra Premiership for long periods but fallen away as injuries and a heavy State of Origin representation took its toll.

This season they have been without the services of Jack de Belin since round one and lost Gareth Widdop and Korbin Sims to long-term injuries but have still managed to win four of their opening seven matches and push the Roosters to the limit on just 40 per cent possession.

Halfback Ben Hunt injured his shoulder early in the match and couldn’t catch or pass properly but managed to play on until the 68th minute. He is expected to be fit for next weekend’s match against Parramatta.

The ambition within the St George Illawarra camp is to be well-placed when Sims, Widdop and possibly de Belin return later in the season.

“I’d like to play them with 50-50 possession and completing above 80 per cent, but in saying that they won the game and they are a very good football team,” McGregor said. “They have proved that time after time. They are the best team in the world.”

In the end, it was the resolve of the Roosters that got them home after the Dragons players responded to a call from McGregor for them to “leave it all out there” in the second half after trailing 14-0 at the interval.

A 47th minute try to winger Zac Lomax and a brilliant 60-metre solo effort by fullback Matt Dufty reduced the deficit to 14-10 with 18 minutes to go. But as they had done against Melbourne last week, the Roosters scored last to secure the two competition points.

Dufty breaks the Roosters open up the middle

It takes a top team to regain momentum and win close games against good opposition but Roosters coach Trent Robinson believes the premiers are still far from their best.

The key to whether the Roosters can become the first team to win successive grand finals since Brisbane in 1992 and 1993 is maintaining the hunger and desire of the players.

“I think we are hungry and we are seeing some really good signs from players and the team but if you take a step back and have a look at that game the Roosters can improve a fair bit,” Robinson said.

“We are going to stay hungry and I am going to make sure I breed that hunger into them continuously.

Lomax scores for the Dragons

An indication of the Roosters' first-half domination was the fact the Dragons had made 203 tackles – 90 more than the Roosters by the interval – and most of the defending they’d been forced to do had been at their own end of the field.

There were several tough calls against the Dragons in the first half but mistakes contributed to the 69 per cent share of possession enjoyed by the Roosters with some poor handling and decision-making.

The back three of Matt Dufty, Jordan Pereira and Lomax didn’t look comfortable defusing kicks from Cooper Cronk in the wide expanses of the SCG and were responsible for five of their side’s seven first-half errors.

Hunt finished with three errors as he struggled through the match after injuring his shoulder in an early collision with Roosters winger Daniel Tupou.

With the SCG being the only ground in the NRL with a cricket pitch, it could be suggested that the Roosters have a greater home field advantage playing at the iconic venue than they did at the adjoining Allianz Stadium.

To prove that point, Jake Friend used the sloping surface to gain a 40-20 kick - their third of the season.

Angus Crichton’s 32nd minute try was scored during the ensuing set of possession but McGregor was entitled to call for "consistency" from match officials after a decision to award an earlier Roosters try after Lomax spilled a Cronk bomb.

Lomax turned his back as he attempted to catch the kick and lost the ball after Roosters winger Daniel Tupou collided with him in the air. A similar incident at the other end of the field was deemed a penalty against Hunt.

A forward pass denied Lomax a first half try but he kick-started St George Illawarra’s second half fight back when centre Euan Aitken put him over after Hunt ran the ball on the last tackle and the Dragons remained in the contest until Siosiua Taukeiaho scored in the 77th minute. 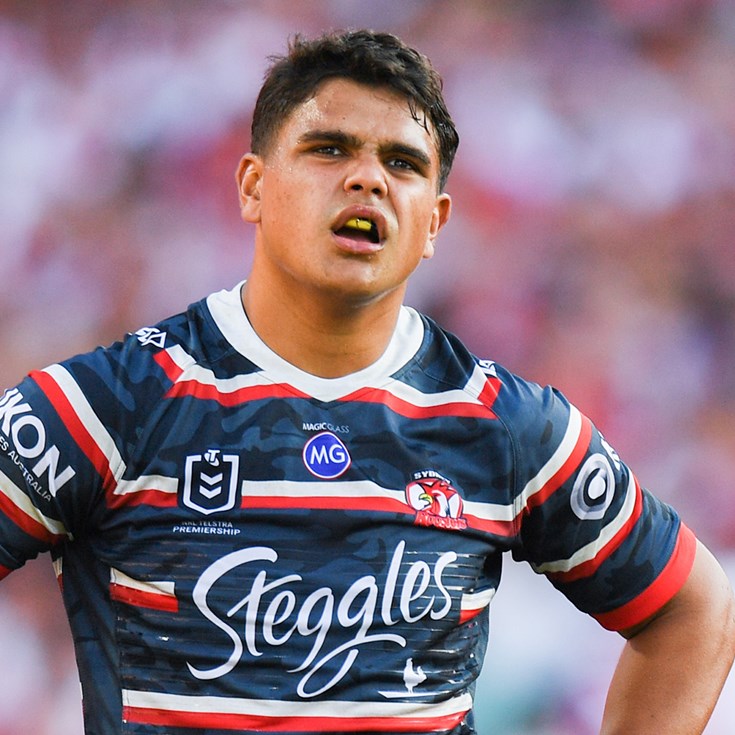 'Not up to my standards': Latrell warns he'll only get better