A changing of the guard, but no change of fortunes.

A week of drama has ended in further agony for the Penrith Panthers, who started the post-Phil Gould era by slumping to their fifth loss of the season against South Sydney on Friday night.

Despite a notable improvement in what has been a rather dysfunctional attack over the opening six weeks, the Panthers couldn't make enough inroads into a resilient Rabbitohs defence, going down 22-18 at Panthers Stadium despite a late surge.

The loss has cast huge doubts over the club's top eight ambitions. It also allowed South Sydney to keep pace with the competition frontrunners.

With Phil Gould watching on in the stands despite being made redundant just three days earlier, the Panthers were unable to turn the tide on their disappointing campaign to date.

Instead, the man who was told "thanks but no thanks", Wayne Bennett, walked away all smiles as his side racked up its sixth win from seven games.

Coach Cleary now finds himself in a spot of bother trying to overturn a 2-5 start to the season. He has roster many believe is entitled to challenge for a premiership.

Nathan Cleary and James Maloney had their best games of the season, playing a more expansive brand of football trying to work over the South Sydney big men.

Walker breaks through and gets the ball to Gagai

However, the Rabbitohs had an answer to Penrith's game plan, holding off a late-surging Panthers side to claim the two competition points.

The Rabbitohs opened the scoring through Kyle Turner, who crashed over the top of Nathan Cleary to give the Bunnies an early 4-0 lead.

A miracle offload from Dane Gagai, who had no right to pop the ball out given the treatment he was receiving from the Panthers defenders, saw Corey Allan stroll over for the easiest of four points for a 10-0 lead after 24 minutes.

The Panthers were rewarded for their toil early in the second half when James Maloney crossed the line courtesy of a Reagan Campbell-Gillard offload to reduce the deficit to just two points in front of a crowd of 14,931.

Despite dominating proceedings for the opening 15 minutes of the second half, the Panthers were unable to pile on more points and instead allowed the Rabbitohs to reclaim the ascendancy.

South Sydney five-eighth Cody Walker, who is mounting a strong case to replace Maloney as the NSW Blues No.6, shrugged out of a Nathan Cleary tackle to push the Rabbitohs out to 16-8 lead with 23 minutes remaining.

Maloney wasn't about to let his opposite number steal the show, putting in a well-timed grubber to allow Dallin Watene-Zelezniak to bag Penrith's second try of the night and reduce the margin to 16-12.

But in the battle of the two No.6's, Walker got the last laugh when he sliced through some feeble Panthers defence to set up Dane Gagai and push the deficit to 10 points with six minutes on the clock.

An act of pure strength gave the Panthers a glimmer of hope, with Viliame Kikau monstering his way over multiple Rabbitohs defenders to make it a four-point game with four minutes to go.

However, there was to be no repeat of the heroics that saw Penrith snatch victory against the Wests Tigers on the same ground three weeks earlier. 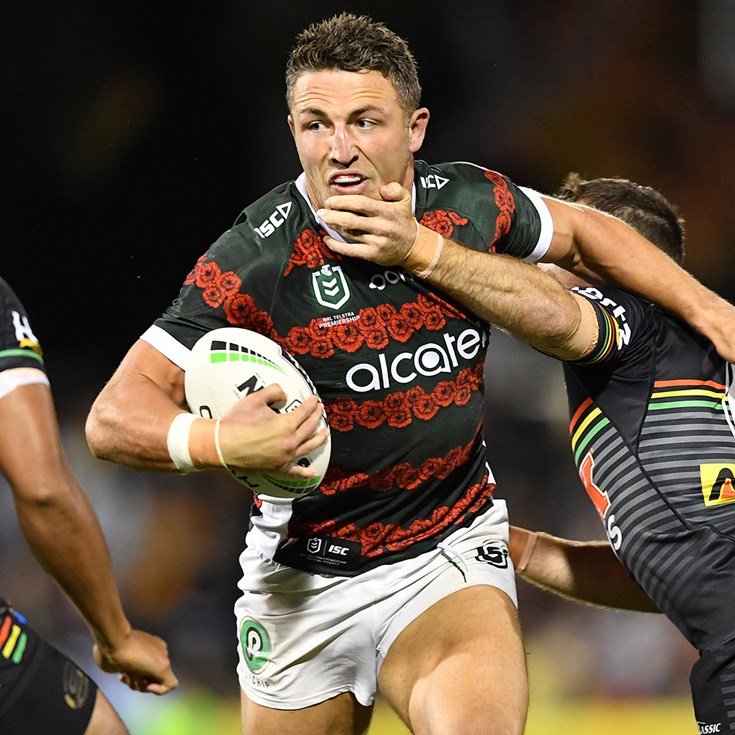