A young star in the making and the game’s oldest warhorse have combined to deliver Cronulla a courageous 26-18 win over the Titans to kick off Magic Round as the Sharks’ injury crisis plunged even deeper.

The Sharks lost props Andrew Fifita and Matt Prior in the seventh and 20th minutes of the first half, but after trailing 18-10 at half-time held tough as Gold Coast self-imploded with ill-discipline and poor options in attack.

When Sharks winger Aaron Gray crossed for the second of his two tries in the 58th minute the score was locked together at 18 apiece and it was the Sharks who held their nerve. Kyle Flanagan coolly slotted a penalty goal six minutes from full-time and Paul Gallen crashed over beside the left upright as the siren sounded.

With the Suncorp Stadium crowd of 17,113 largely happy to see Gallen’s awful record in Brisbane extended with one more loss - the Sharks haven't won here since 2014 - the skipper had the last laugh, potting the conversion of his own try and signalling for the haters to quieten down.

Big men were going down on both sides in the first half as Shannon Boyd was assisted from the field after copping a head knock, the Titans prop failing his HIA and playing no further part in the contest.

It was a rather inauspicious start to the inaugural Magic Round with the Titans making an embarrassing mess of the kick-off but they recovered to lead 18-10 at the break.

The Titans’ bungled start to the match was compounded with back-to-back penalties. But it only took until the ninth minute before the Sharks struck first, Kurt Capewell turning a one-on-one strip into an attacking opportunity and delivering the pass for Josh Morris to score wide out.

An error by Sharks fullback Josh Dugan on his try-line gifted Gold Coast another shot, a bouncing Ash Taylor pass falling into the arms of winger Dale Copley for a 6-4 advantage after 19 minutes.

They pushed their luck hunting for a second two minutes later with an error on play one and Cronulla made them pay, Chad Townsend’s grubber to end the ensuing set perfectly weighted for Morris to score his second.

It was an error that led to the next try also but this time for the Titans, Braden Hamlin-Uele’s offload after a barnstorming run passing through the arms of Kyle Flanagan, off the arm of Dugan before it was snatched by Titans five-eighth AJ Brimson who raced 35 metres to score beside the posts.

With his confidence noticeably building Taylor laid on his second try of the night four minutes from half-time, taking the ball to the Sharks defensive line and threading a grubber into the in-goal for Tyrone Peachey to push through and score, Gordon’s conversion giving the Titans an eight-point lead at the break.

The haphazard nature of the first half tries continued eight minutes into the second term, Flanagan’s pass fumbled backwards by Titans debutant Jesse Arthars and regathered by Gray to crash over for his first NRL try since round 23, 2017.

The former Rabbitoh had to wait only 11 minutes for his next, Townsend delivering a sublime cut-out pass after Brian Kelly put the Titans under pressure with another ill-disciplined penalty, the sides locked at 18-all with 20 minutes to play.

Bronson Xerri was denied for the second time due to an obstruction and despite consecutive penalties the Titans failed to do anything with it, a rushed Brian Kelly kick handing the Sharks a seven-tackle set. 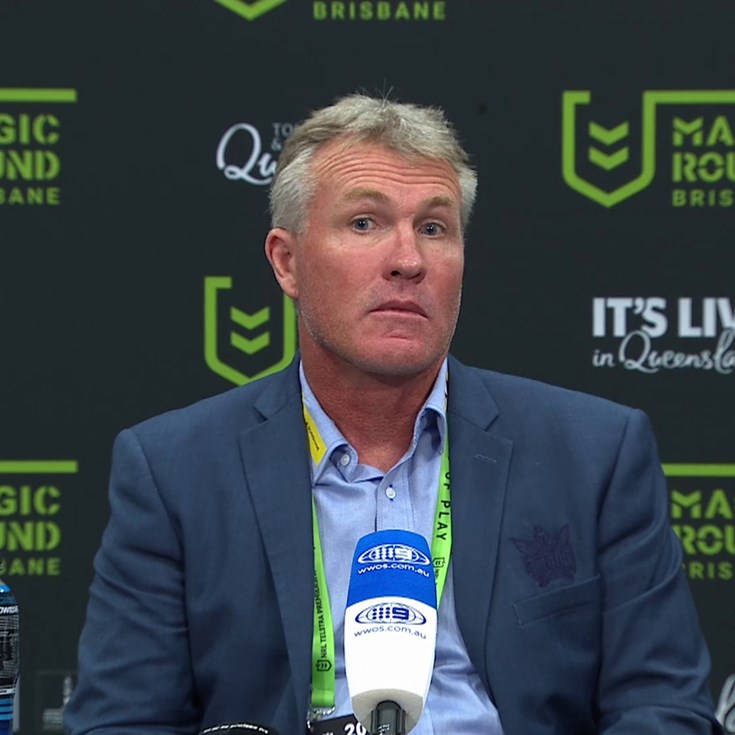