Giant Newcastle Knights winger Edrick Lee has emerged as a possible bolter for Queensland for the State of Origin series-opener at Suncorp Stadium next month.

The Brisbane-born 26-year-old will play his 100th NRL game at the same ground on Saturday as the Knights, chasing their third straight victory, take on Canterbury-Bankstown.

Injuries and the retirement of Greg Inglis have left Maroons coach Kevin Walters and selectors with some tough decisions to make as they try to settle on their spine and backline for Origin I on June 5.

If likely Maroons captain Daly Cherry-Evans does not recover from a syndesmosis injury in time, North Queensland’s Michael Morgan is expected to be moved from the centres to halfback, leaving Dane Gagai and Will Chambers as the likely centres.

Brisbane try-scoring machine Corey Oates is understood to be a lock on the left wing, leaving the likes of Kyle Feldt and Lee among the leading contenders to fill the void on Queensland’s right wing.

Playing on the left flank for Newcastle, Lee has scored four tries to be their leading tryscorer, but he is no stranger to the right side having played there for Cronulla last year outside current Knights team-mate Jesse Ramien.

“I guess if the opportunity arises, I’ll definitely grab it with both hands,” Lee told NRL.com on Friday before leaving for Brisbane with his Newcastle team-mates.

“Origin is a goal every year but first and foremost, I always focus on my club footy. I’m focused here on the Knights first then if the team’s going well, you put your hand up to be selected.”

Lee was called in as 18th man for the Origin decider in 2015 when he was at Canberra and has been included in Emerging Maroons camps at various stages of his career at the Raiders and Sharks.

A consistent contributor on Newcastle’s left edge this season, Lee has averaged 127 metres a game, and was confident his all-round game had developed to a point where he could handle the extra pressure of the Origin stage.

“I guess I’m just more mature now, and more consistent with my performance each week, which enables me to play my natural game,” he said.

“Like I said, if the opportunity arises, I’ll grab it with both hands but my main focus is to get the Knights back on track and make sure I’m playing my best football for the club.”

Lee made his NRL debut for Canberra against South Sydney in 2012 and was looking forward to reaching triple figures in his home town.

“It’s definitely a massive milestone and the great thing about it is it’s in Brisbane, where I’m from, so it’s a great opportunity to perform in front of my parents,” he told reporters in Newcastle.

“I’m expecting a big turn-out of family and friends because throughout the week, I’ve received a lot of messages that a big fan group is going to attend, so I can’t wait to see them.

“My Mum (Bonnie) has only been to a handful of games … so this game will mean more to me.”

Newcastle’s “Magic Round” game against Canterbury will also be significant for Lachlan Fitzgibbon, who will line up for his 50th in the NRL after making his debut in 2015.

The Sydney-born back-rower was a Bulldogs fan before moving to the Hunter as an eight-year-old and progressing from the South Newcastle Lions to the Knights’ junior representative ranks.

Now 25, Fitzgibbon endured some lean years early on as the Knights finished last in his first three seasons, but during that test of mettle he emerged as a regular in their run-on side.

“There was a period there where I wasn’t sure how many games I was going to get. Once I debuted, I was hoping to be in the side for a number of years but as it was, to get to 10 games took me three years,” Fitzgibbon told reporters on Friday.

“Once I got over that little hurdle, it flowed over the last couple of years, so 50 games is a big achievement for myself and hopefully there’s a few more to come.

“I was talking to someone about this the other day and I think I’ve won 14 from 49 after last weekend, so not a great strike-rate. But for the next 50, we’re building a pretty decent roster and hopefully I’m here for the next 50 or 100 or whatever it is, and hopefully we win a few more games.” 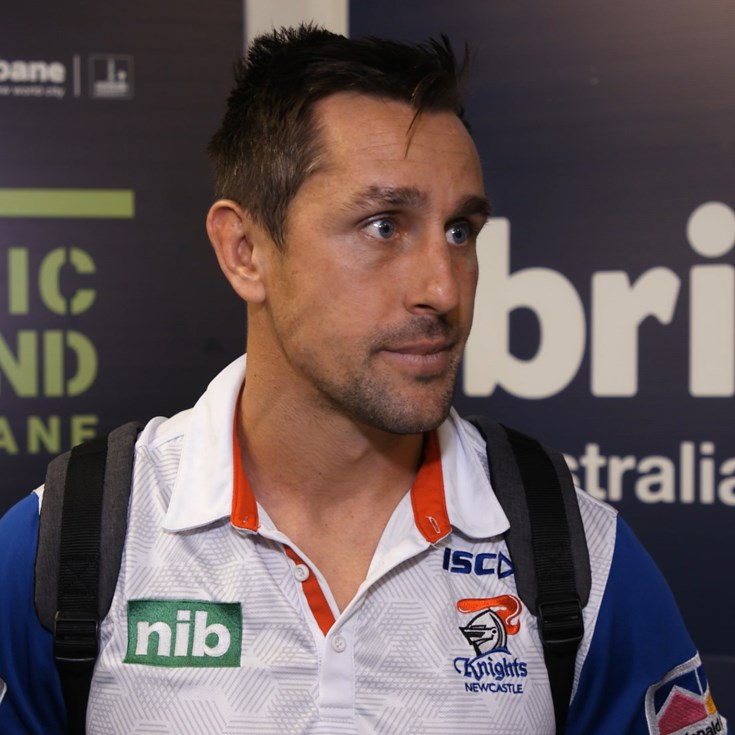 'He'd have pencilled it in': Woods backs Klemmer to bite Bulldogs