Broncos teen Tom Dearden will steer Queensland's powerhouse club against the most experienced halfback in rugby league history on Friday, having knocked back the overtures of the best No.7 the game has ever seen.

Eighteen-year-old Dearden is set to square off with childhood idol and Roosters champion Cooper Cronk next Friday, less than a year after knocking back serious interest from the Tricolours that saw Andrew Johns involved in the premiers' pitch.

Brisbane have Dearden tied up until the end of 2021, but not before NRL rivals Canterbury, the Titans and Roosters among others sat down with the junior rep star, his parents and manager Sam Ayoub.

The Roosters pulled out the big guns when Nick Politis broke bread with Deardens, enlisting their then-halves consultant and eighth Immortal Johns to try and sway the youngster over lunch last May.

Cronk moved past Darren Lockyer's 355 appearances in Sunday's win over the Raiders, the 35-year-old now the most experienced half in history.

Succeeding him at Bondi was a compelling sell for Dearden.

But his decision to stay in Brisbane has paid off in quick time, the rookie half graduating to first grade within just five months of joining Anthony Seibold's top training squad.

He did so as the youngest starting halfback in Broncos history.

And now the kid that idolised Cronk and future Immortal Jonathan Thurston squares off with the Roosters and a champion playmaker once more.

"Growing up my heroes have been Jonathan Thurston my whole life, and also Cooper Cronk so I get to play a game against him next week," Dearden said after Brisbane's win over Manly, his first at NRL level.

"That'll be pretty surreal. The main thing I've taken from Thurston's game is just competing on every play.

"He's always there and that's what I try and take into my game."

Asked what he has tried to replicate from Cronk, Dearden said: "Just how composed he is. He always just looks relaxed and knows what he's doing.

"It's going to be another challenge. We'll do video during the week and I'll be ready to do the job next week."

Dearden's has been no gentle introduction to the top level, all 114 kilos of Tevita Tatola targeting him during a heavy loss to the Rabbitohs last week on debut.

It's a significant punt taken by the Broncos coach, heaping responsibility on halves partner Anthony Milford, who in turn produced his best game of 2019 against the Sea Eagles.

Milford steps off the right foot

Dearden for his part takes that belief, and the expectation with it, in his stride.

"That's my mentality. I'm not really thinking too much about the future.

"I'm just concentrating on doing my job now every week, building on my game week-to-week. That's my main focus for the year." 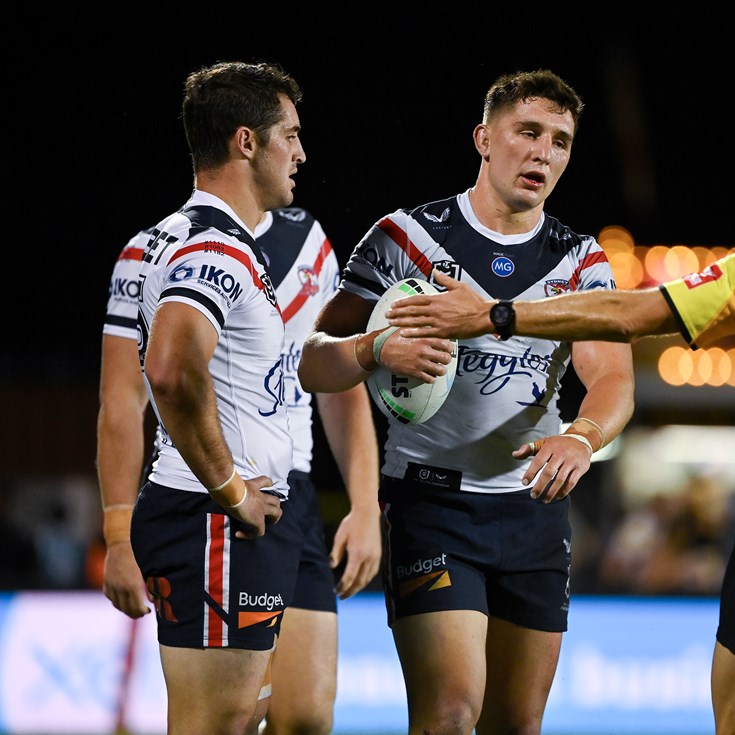