Faced with their second big test of the season last week, the Raiders could do nothing to stop the red-hot Roosters from running up a 30-6 lead at Suncorp Stadium.

They got back in the match and were in striking distance as the final minutes wound down, but a loss is a loss and Ricky Stuart will be hoping his players show in their performance that they learned a valuable lesson when Canberra host another competition heavyweight on Saturday night.

The Rabbitohs continued on their winning ways with last week's relatively comfortable victory over the Cowboys.

Wayne Bennett is pressing all the right buttons and the Bunnies are looming as genuine challengers for the Roosters' title.

Raiders: One forced change on the wing, with Bailey Simonsson replacing injured Jordan Rapana (knee). Ricky Stuart also opted to move Nick Cotric to centre and Michael Oldfield to wing. Sebastian Kris was named to fill Simonsson's place on the bench. The Raiders are otherwise intact and aiming to make up for last week's loss to the Roosters. Emre Guler and Jack Murchie were omitted 24 hours prior to kick off. Aidan Sezer and Royce Hunt were the last two men left out an hour before game time.

Rabbitohs: Kyle Turner (concussion) was ruled out an hour before kick-off and Ethan Lowe takes his spot in the centres. Dean Britt comes onto the bench for Lowe. As has been the case for the past six weeks, George Burgess again goes back to the bench after being named to start and Junior Tatola will start. A change in the No.1 jersey with Corey Allan shifting from the wing to fullback to replace the injured Alex Johnston (knee). Mawene Hiroti comes in on the wing for just his second NRL game. Bayley Sironen and Tom Amone dropped out of the squad 24 hours before kick-off.

Jack Wighton has a difficult challenge against Cody Walker - one of the NRL's hottest players - while the battle between Josh Hodgson and Damien Cook - two of the best hookers in the world - should be a classic. But both teams boast a strong UK contingent and you can bet Sam Burgess and his brothers will be hungry to mix it up with countrymen Hodgson, Elliott Whitehead and Ryan Sutton.

They looked beaten early last week and have to match the Rabbitohs' aggression in the opening 20 minutes. If they can score first it might make the Bunnies a little anxious, but either way the Raiders must remain patient and stay in the arm-wrestle because they've shown they can score points with an even share of possession.

Sam Burgess will be looking to terrorise the Raiders with his unique mix of aggression and skill, while Walker and Cook loom as major threats to the Raiders. As long as they don't get complacent or ahead of themselves (and it's hard to see that happening given their desire to keep pace with the Roosters) the Bunnies will continue to be a tough nut to crack.

The Raiders were flying but unfortunately for Ricky Stuart injuries to Leilua, Rapana and Bateman have coincided with a couple of losses. Meanwhile nobody's really talking up how good the Rabbitohs are going. Damien Cook has certainly found his form. Adam Reynolds and Cody Walker are now in contention for Origin so there's plenty for the South Sydney halves to play for, they'll get on the back of a big forward pack and I think they'll have plenty of time to test a Raiders edge defence that will be coping with new combinations again this week. Rabbitohs by 10.

The Rabbitohs and Roosters are like two bar-room brawlers eyeing each other from opposite sides of the room, looking for that one tiny flinch as they dare each other to make the first move. They have identical 8-1 records after last week's Magic Round and seem to be inspiring each other to new levels every week. The Storm remain a massive threat, while the Raiders, Eels and Sharks can't be counted out, but the Rabbitohs and Roosters are on track for a grand final showdown. 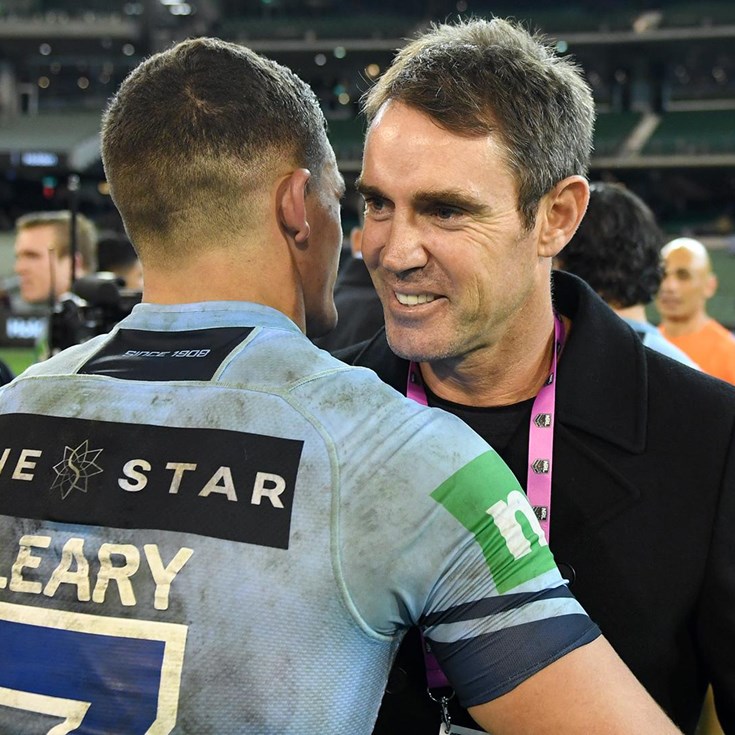