After performing at a tremendously high level for several weeks, the Roosters finally hit a flat spot last week against the Broncos.

Roosters coach Trent Robinson said his team didn't deserve to beat Brisbane and learned a valuable lesson in the process.

But it's not like they were played off the park - it took all the Broncos' hunger and intensity to spring the 15-10 upset. The Roosters will be stinging to get straight back on track when they meet the Knights in Friday night's Indigenous Round duel at McDonald Jones Stadium.

Surging Newcastle chalked up their fourth straight win last week against the Dragons and look nothing like the side that stumbled to five losses on the trot earlier in the year.

Knights: Nathan Brown has retained the side that walloped the Dragons last week. Connor Watson was named as the starting five-eighth, but he made way for Kurt Mann in a late switch last week and Brown has stuck with the same approach against the Roosters. Jamie Buhrer and Josh King were cut an hour prior to kick-off, while Pasami Saulo and Mason Lino dropped off the extended bench on Thursday.

Roosters: Cooper Cronk and Zane Tetevano are out, while Latrell Mitchell will start at five-eighth alongside Luke Keary. Brock Lamb and Lindsay Collins were elevated to the bench. Boyd Cordner returns after missing last week's loss to the Broncos while Daniel Tupou is named to start on the wing. Ryan Hall dropped off the reserves list on Thursday, while Poasa Faamausili and Josh Curran were the last players omitted before kick-off.

There'll be plenty of hype and intrigue surrounding the Pearce v Cronk duel, but this game might be all about what the respective fullbacks bring to the table. Kalyn Ponga has returned to his electrifying best since reverting to fullback, while Roosters match-winner James Tedesco is the best fullback in the game and will be keen to over-shadow the mercurial Ponga. They seem certain to be named as Queensland and NSW No.1s.

As usual Ponga and Pearce have to shoulder most of the playmaking duties, while the other half of the spine, Connor Watson and Danny Levi, need to play their roles to a tee. It's easier said than done, but if the Knights hold their own against the Roosters' aggressive pack and allow the little men time and space to create, an upset is not out of the question.

Having their eight-game winning streak snapped should provide sufficient impetus for the Chooks to be in a vengeful mood on Friday. Trent Robinson must ensure they don't take the opposition for granted, while Cronk has to out-point Pearce and the outside backs have to get back to their damaging best after being nullified last week.

The Roosters don't lose too many games in a row and have the extra motivation of Cooper Cronk's retirement announcement this round. Newcastle are flying now, they're playing direct and energised football. It's a big clash for Mitchell Pearce, coming up against his old club. This has got some great clashes individually all across the park. I think the Roosters will win but it'll be a close game. Roosters by 4.

Latrell Mitchell is the NRL's top point-scorer (115), while Tedesco leads the league in line breaks (11) and tackle breaks (61). However, Tedesco also has the most handling errors (16) and teammate Luke Keary is second with 15. As a team the Roosters have made more handling errors (104) than any team.

It must've felt strange for Cooper Cronk when he was booed off the Suncorp Stadium turf last Friday. Cronk is more accustomed to cheers and adulation in Brisbane after being such a fine Origin servant for Queensland. But sentiment went out the door when he was sin-binned early in the match for a professional foul on old Maroons teammate Darius Boyd. He was booed all the way up the tunnel, so he'd better not have a go at Ponga. 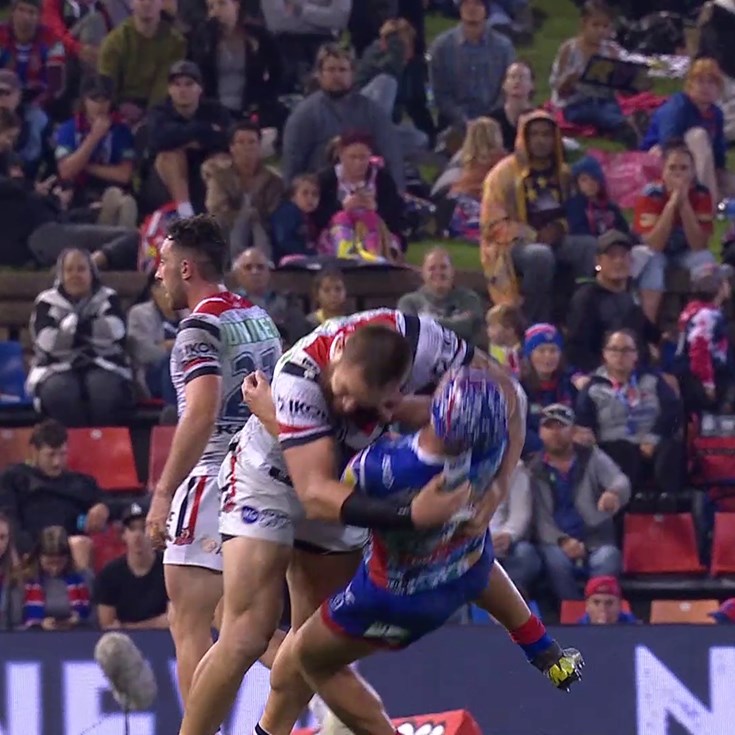 Waerea-Hargreaves charged for tackle on Ponga

Preston hopes to have inspired Australia