The final-minute desperation shown by Cowboys winger Kyle Feldt capped a pulsating 6-4 win over the Titans at Cbus Super Stadium on Sunday.

In a match that was low on points but high on drama, Gold Coast looked like snatching a second straight win on the back of a Tyrone Peachey grubber and regather 10 metres out from the North Queensland line.

After regaining possession, Peachey spun the ball to the left where centre Brian Kelly looked certain to score until Feldt flew from the clouds to barrel him into touch. Match officials had - unknowingly to Feldt - already blown the play dead.

The late efforts of Feldt and his teammates marked a fitting way for the Cowboys to secure their third win on the trot. They were forced to play the final 40 minutes with only two fit men on the interchange bench.

Forward Corey Jensen failed his HIA after he copped a knock trying to tackle Titans prop Shannon Boyd in the 34th minute. Winger Gideon Gela-Mosby joined him in the sheds two minutes later with a shoulder injury.

In front of a crowd of 11,226 fans, Jason Taumalolo, John Asiata, Jordan Kahu and captain Jordan McLean were outstanding. The win moved the Cowboys to just outside the top eight nearing the midway point of the season.

Down to 15 fit men and trailing 4-0, North Queensland took advantage of a Titans error and three penalties in quick succession to hit the front for the first time 10 minutes into the second term.

After a period of hammering away at the Titans line, it took a second effort over the line from a rampaging Jason Taumalolo to finally breach the Titans defence. Jordan Kahu's conversion put the visitors ahead 6-4. That proved enough.

The game ebbed and flowed for the next 25 minutes until Cowboys replacement hooker Kurt Baptiste was placed on report for a challenge at the legs of Titans five-eighth Tyrone Roberts after kicking.

The referees initially played advantage and Kevin Proctor appeared to have scored only for centre Jesse Arthars to be called for a knock-on contesting the kick. Referee Henry Perenara went back to award the Titans a penalty.

After Taylor had missed both earlier attempts – including a penalty goal with 12 minutes to play – this time it was Roberts who shaved the outside of the right upright to remain two points behind.

The Titans carried a 4-0 advantage into the break courtesy of Dale Copley's ninth try of the season but not before a mini flare-up 30 seconds from half-time.

Gold Coast firebrand Keegan Hipgrave was penalised for a flop on Kyle Feldt as the Cowboys winger escaped the in-goal. Cowboys players took umbrage at the extra treatment resulting in some spirited push and shove.

Taumalolo wrestles the ball to ground

The set-to reflected what had been a tense first 40 minutes.

At the 20-minute mark, a penalty against the Cowboys for a ruck infringement gave the Titans the territory they needed to launch an attacking raid before a Kevin Proctor offload sparked an enterprising interchange of passing that resulted in Copley crossing in the corner.

Although they would represent the only points of the half, both sides had their chances.

AJ Brimson was denied a runaway try in the same corner Copley scored by terrific Jordan Kahu cover defence, Kahu called back for a forward pass four minutes later when North Queensland winger Gideon Gela-Mosby looked to have scored one of the most spectacular tries of the season.

Titans winger Anthony Don was also held up over the line in the 36th minute as desperate Cowboys defence stopped him from grounding a Taylor chip to the corner. 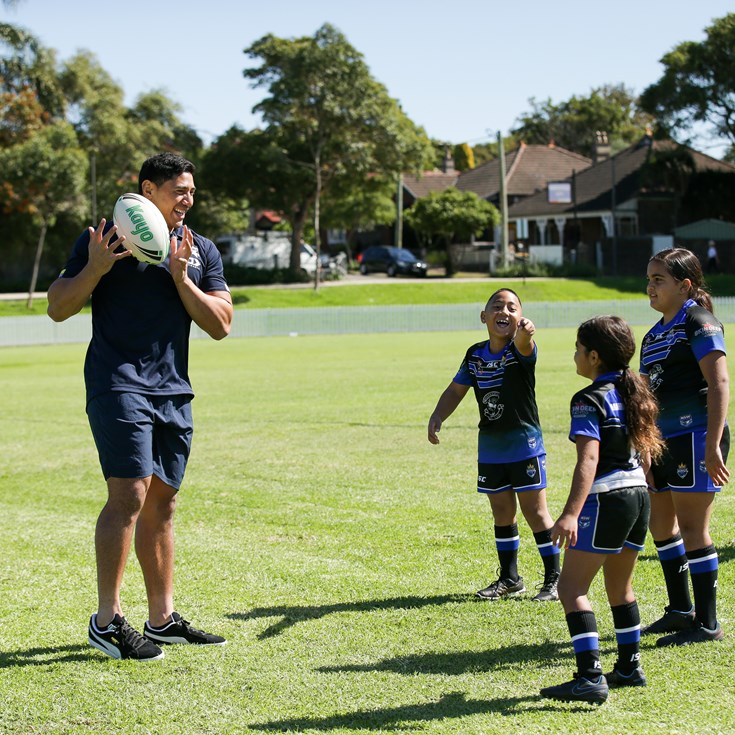 Fifita the destroyer as Titans heap more pain on Cowboys