Parramatta coach Brad Arthur declared his players needed to "harden up" if they want to be full-time footballers after their 42-22 capitulation to Cronulla at Pointsbet Stadium on Saturday night.

The Eels were a shadow of the team which beat then Telstra Premiership leaders South Sydney a week earlier and Arthur's frustration at their inconsistency was obvious at the post-match press conference.

After losing star fullback and captain Clint Gutherson in just the second minute with concussion following a collision with Sharks centre Josh Dugan, the Eels looked lost and only made the scoreline respectable with three late consolation tries.

"We have got to decide if we want to be a full-time team or a part-time team," Arthur said.

"Full-time is all the time, every week. We are training well, we are preparing well but coming to games, when things don't go quite our way we need to harden up there."

After losing Gutherson, Arthur was forced to shift five-eighth Will Smith to fullback and play interchange forward David Gower in the halves alongside Mitchell Moses, whose re-signing to a new three year deal was trumpeted by the club just before kick-off.

The retention of Moses follows the re-signing of Gutherson but there are another 14 Parramatta players off contract and many are playing for their futures at the club.

"As a team we expect more of everyone," Arthur said. "There are some football things we got wrong, we were dumb with some of the things that we did.

"Some of our kicks weren't great and there is extra pressure on Mitchell to do that but we have got to tackle. At the end of the day all we have got to do is run hard and tackle hard, and see what happens."

The loss followed a 64-10 thumping by Melbourne in round nine and narrow defeats against North Queensland and Penrith before last weekend's 26-14 win over Souths.

After starting the season with three wins from their opening four matches, the Eels have now fallen out of the top eight.

With the Eels completing 84 per cent of their sets, winning the penalty count 10-6 and making 10 errors compared to 15 by Cronulla, Arthur pinpointed attitude as the reason they succumbed to such a heavy defeat.

Ferguson breaks away for Jennings to score

"I'm sick of talking about it. There needs to be a real change to our approach week in and week out," Arthur said.

"Defensively we just weren't good enough. We have got to make our tackles.

"We can't start well one week and then dip the toe in the next week. I don't want to have to keep making changes every week because that doesn't give you any continuity or combinations."

The only bright spot for the Eels was the return of star forward Nathan Brown and he played 45 minutes from the interchange bench in his first match since round one.

"He came on and tried to spark us," Arthur said. "He hasn't done a lot with the team, probably three sessions, so if we play with the right attitude we will give him a chance to show us what he has got." 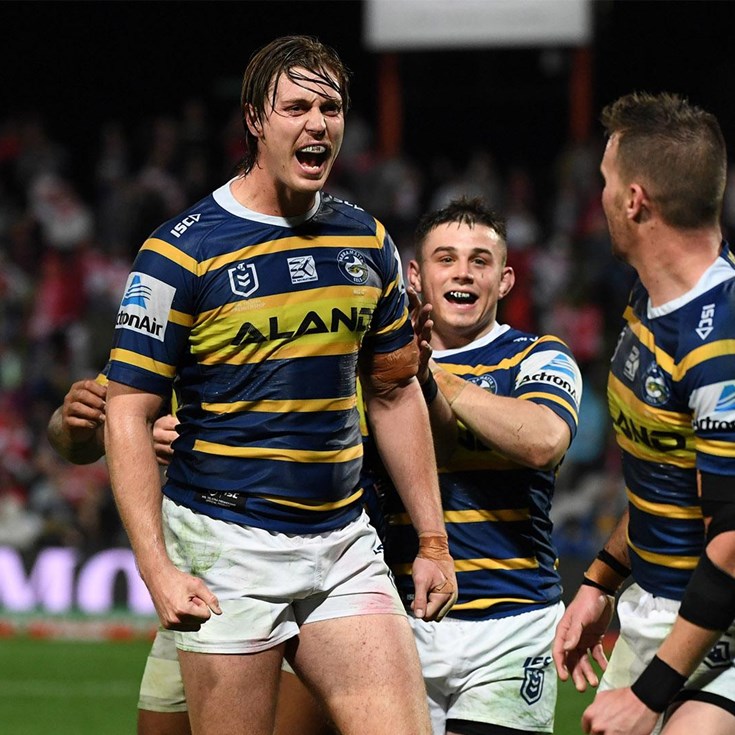 Moses keen to build on combination with 'bodyguard' Matterson