Wests Tigers prop Ben Matulino insists a recent conversation with coach Michael Maguire has left him reassured he'll see out the remaining two seasons of his contract as recruitment and retention talk intensifies at Concord.

Matulino is one of several players the Tigers are rumoured to be shopping around to rival clubs, with the joint venture 11th on the Telstra Premiership ladder after suffering their third straight loss.

The former Kiwi international joined the club in 2018 and has featured in every game for the Tigers this year, but the impending signature of Parramatta prop Tim Mannah has left everyone on their toes.

"When I was at the Warriors this sort of stuff happened and guys were getting shopped around. I guess maybe it's my turn, I don't know, but I've been assured by Madge I'll be here for the next two years.

"He's told the guys individually if we're staying or not, and he's told me I've got two more years. When it first came out I rang my manager and he said he hadn't heard anything from anyone.

Tackle of the week: Round 13

"Then he called me and said I can guarantee you you're not leaving."

Matulino has struggled to make in-roads since moving to Concord from the Warriors two years ago, averaging just 77 metres per game in 2019 – his lowest figures in a decade.

But the 30-year-old, who is nearing 250 NRL games, said he felt no pressure after arriving to the club as a touted replacement for former captain Aaron Woods.

"There's no pressure there I don't think," Matulino said.

"You've just got to go out there and try your best and the wins will come. We're under pressure at the moment. It's three losses on the trot and we've lost against a lot of top four teams. We need to turn things around."

The Tigers are unlikely to have the services of Mannah this week with Parramatta yet to officially announce the veteran prop's release.

Maguire's side will leave Sydney for North Queensland on Wednesday morning, leaving Mannah little time to settle in to his new surroundings and prepare for the clash.

"I'm looking forward to it, he's a really nice guy and can only boost our team," Matulino said of Mannah.

"I've known Timmy since 2008 with the under 20s and got along really well with him. He's got a lot of experience." 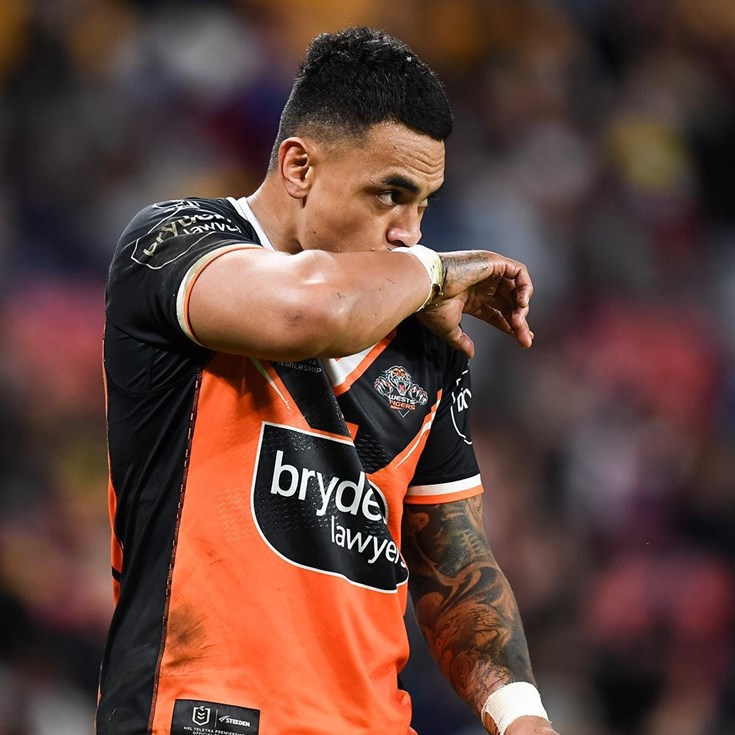