Another Cameron Munster masterclass has helped the Melbourne Storm maintain their place at the top of the Telstra Premiership ladder with a clinical 34-4 victory over the Newcastle Knights on Saturday afternoon.

Munster was at his blistering best at both ends of the park as the Storm ran in six tries to one and registered their fifth win on the trot in a dominant home performance in front of more than 16,000 fans.

The Queensland Origin star had a hand in four of the Storm's tries and produced some eye-catching efforts on defence that included picking off an errant Knights pass that led to one of Joe Stimson’s two tries and a pair of his now trademark one-on-one strips.

Skipper Cameron Smith also produced a vintage performance for the ladder leaders, with the veteran hooker a perfect five-from-five with the boot and just as impressive with his decision making in attack.

The Knights were never really in the contest, with exciting fullback Kalyn Ponga shut out of the game by the stifling Storm defence and Origin hopeful Mitchell Peace always under pressure with ball in hand.

The loss was further soured for the Knights by the fact that forward Mitch Barnett was placed on report for a dangerous tackle on Jahrome Hughes and could face a stint on the sideline for the misdemeanor.

The Knights came to Melbourne full of confidence courtesy of a six-game winning streak, but that was soon evaporated as the hosts made it tough for them to get any meaningful ball.

When they did get the chance to attack it was often at the wrong end of the ground and the inability to complete their sets played into the hands of Craig Bellamy's side.

It didn't take long for the Storm to flex their muscle when in the 13th minute Nelson Asofa-Solomona offloaded close to the line for Hughes to claim the opening try.

Munster shows his class to set up Seve

The Storm doubled their advantage 13 minutes later and it was Munster's decision to run the ball on the final tackle that proved pivotal, as Will Chambers put a lovely kick through for Josh Addo-Carr to run on to.

It was 12-0 to the Storm at the break and that lead was further increased just minutes into the second half when Suliasi Vunivalu acrobatically leapt high to gather a pin-point Brodie Croft cross field kick.

From 18-0 down it was going to be tough for the Knights to mount a comeback, but Ponga won a repeat set and Hymel Hunt crashed over out wide on the ensuing play to reduce the margin to 14 with a little over half an hour still to play.

But that hope was quickly evaporated as Edrick Lee was sent to the bin for a professional foul on Smith and the Storm immediately made their numerical advantage count as Munster sent Stimson over for his first try of the season.

Munster then capped off his afternoon's work by intercepting an errant Connor Watson pass to set up Marion Seve, before the playmaker helped Stimson complete his double shortly after to complete the rout. 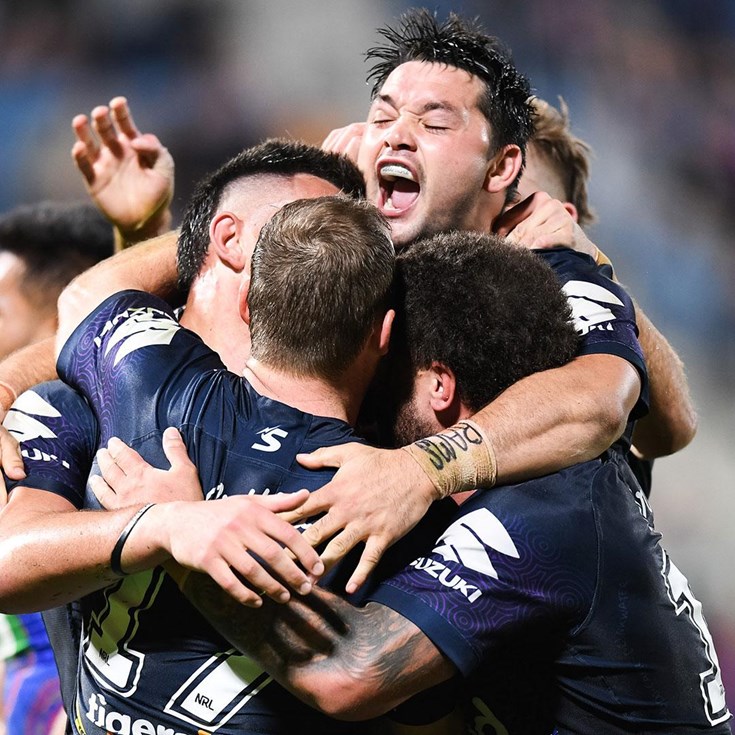