The Tigers scored a crucial win against the slumping Rabbitohs last week to stay one step ahead of a couple of teams they're jostling with for a top eight spot.

But they can't afford to pat themselves on the back with the Roosters waiting in the wings.

The Chooks have lost four of their past five games and need to rediscover their A-game heading into the finals, especially if they want to secure a top two finish.

The good news for Trent Robinson is that there's a good chance Luke Keary and Jared Waerea-Hargreaves will be back in action on Friday night.

Wests Tigers: Tom Mikaele starts at prop with Josh Aloiai moving to the bench in the Tigers' only late change. Chris McQueen and Oliver Clark dropped off the reserves list. Paul Momirovski replaces Maroons rep Moses Mbye at centre. Russell Packer and Josh Reynolds dropped out of the 21-man squad named on Tuesday.

Roosters: Sam Verrils replaces Lachlan Lam on the becnh and Daniel Fifita dropped off the extended bench. Blues reps James Tedesco and Boyd Cordner are out while Luke Keary returns from concussion at five-eighth pushing Latrell Mitchell back to centre and Joseph Manu to fullback. Ryan Hall is back on the wing for Matt Ikuvalu (bench), Jared Waerea-Hargreaves (hamstring) is back at prop alongside Zane Tetevano with Isaac Liu moving to lock and Nat Butcher to second row and Siosiua Taukeiaho out. Matt Ikuvalu and Drew Hutchison dropped off the reserves list on Thursday night.

Luke Brooks and Benji Marshall have a tough task on their hands against Cooper Cronk and Luke Keary, but it's in the forwards where Tigers backrowers Chris Lawrence and Ryan Matterson will be relishing the chance to shine against a Roosters team missing captain Boyd Cordner.

Defence will have to be practised and preached all week after their 30-point thrashing from the Roosters in round eight. They got it right against the Chooks last year, winning 10-8 in their first meeting and narrowly losing 16-14 in their second clash. They kept the Bunnies to nine points last week and prevailed, but they might need to score a few more on Friday. Benji and Brooks need to get the offence firing.

The Roosters haven't handled the Origin period as well as Trent Robinson would've hoped and they won't get any respite on Friday at Bankwest Stadium. They need to start getting back to their destructive ways in the forwards and completing sets at a higher rate. The Chooks will be focused on a good start, knowing the Tigers might start thinking it's round eight all over again and stray from the game plan.

The Roosters may lose their Origin players but they still have Test players from other nations  playing. They’ll rely on Cooper Cronk to steer them around and supply a strong kicking game. Michael Chee-Kam was the star for the Wests Tigers again last week and I think they’ll be glad to be getting the Roosters this week. With some Benji and Robbie magic, I’m going for an upset here. Wests Tigers by 4

Latrell Mitchell is the competition's leading point-scorer (141) with 10 tries, 50 goals and a field goal. James Tedesco is tops in tackle breaks (89) and ranks in the top five in line breaks (13). On the downside, the Chooks are among the worst offenders when it comes to making errors (180).

His form might've dipped over the past month but Latrell Mitchell tormented the Tigers in the Roosters' crushing 42-12 win in round eight. Mitchell finished with a personal high of 26 points from a hat-trick of tries and seven goals. The Chooks' other try-scorers that day were Nat Butcher, Daniel Tupou, Luke Keary and Boyd Cordner. 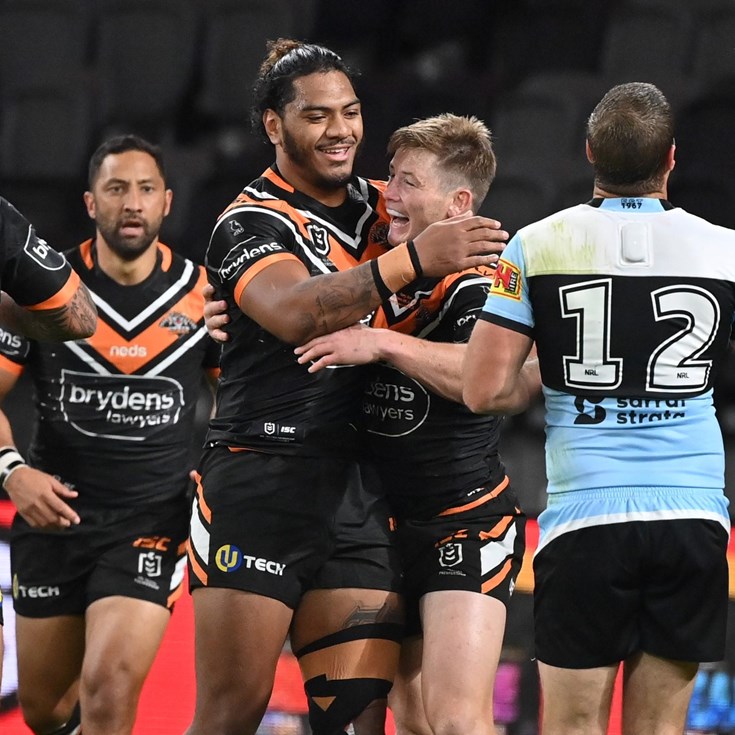