Gavin Cooper reckons he's discovered the formula for longevity in the NRL.

The Cowboys' long-serving backrower reaches the 300-game milestone on Sunday against the Roosters and is proud to 'share' his moment of glory with fellow 300-gamer Benji Marshall and 400-game superstar Cameron Smith.

Never one to waste words, Cooper succinctly summed up his journey to 300.

"Always a bit of luck involved. Injuries play a part in most people's careers so it’s how you bounce back. I’ve bounced around a couple of clubs and I got to play in the outside backs so that prolonged it. Moving into the back row for the majority of my career I've been pretty lucky.”

Cooper hasn't been swept up in 300th-game hype yet but will probably get more reflective the closer it gets to kick-off.

“I want to get there first, once Sunday morning rolls around it'll be a pretty special day," the former Murgon Mustangs junior said.

“It's a big occasion. I don’t want to downplay it either.

"I’m only the 37th player to do it and I know Smithy’s going to break four-hundred this week, and Benji three-hundred. It’s good to have my name mentioned alongside those other guys but I think Smithy’s blown us out of the ballpark this week."

Cooper began his professional career in 2003 and played 18 games for the Cowboys in 2006 season before heading to the Gold Coast Titans for their inaugural year.

From a young age Cooper always had the belief he would one day break into the NRL.

“Once I got in to a system I had faith that I would, but once I got the chance to play one I thought I could do it for a long time, and I've been lucky enough to do so at a couple of great clubs and with some great people alongside me," the 33-year-old said.

"There's a lot of great memories throughout the 300 and it's not finished yet.”

Cooper played 36 games for the Titans across two seasons and then made 40 appearances for Penrith in 2009 and '10 before returning to North Queensland on a two-year contract as an accomplished back-rower.

He never stopped believing he would eventually return to the club where it all started.

“I was always comfortable that one day I may come back," he said.

"If there was somewhere I was going to go it was back up here to the north and I wouldn't change any of the story so far.”

Cooper’s desire to play is as strong as the first day he laced up the boots and he hasn't set himself a use-by date.

"I still enjoy the challenge and turning up to training so I won’t put a time-frame on it, but yeah definitely keen to keep going.”

"It's a wonderful achievement to reach that milestone for any player," Green said.

“His willingness to help everyone and with the young guys as well as the old guys. Aside from what he does on the field, he's a great player. He’s played Origin, won grand finals and he's been a really good leader at the club too. He captained the team at different stages, took us to a grand final in ‘17 and he was captain when we won the Nines, so he's had a wonderful career.”

Green said Matt Scott would make his return from injury against the Roosters.

Tackle of the week: Round 16

“Obviously having his experience back is a huge boost for us. He’s as close to [100%] as possible," he said.

"We’ll bring him off the bench so there’s no sort of pressure on the interchange from that point of view. If he's a bit short of a run then it won’t matter too much, we’ve got some guys around him that can play some minutes.”

Coen Hess is a chance of coming back and will be monitored this week at training.

Te Maire Martin has been seen at Cowboys training and Green said it’s good to have him back.

“It’s a little bit of a wait and see approach with him," he said.

"He'll up his training and hopefully he copes well with it but at this stage he’s going pretty well.” 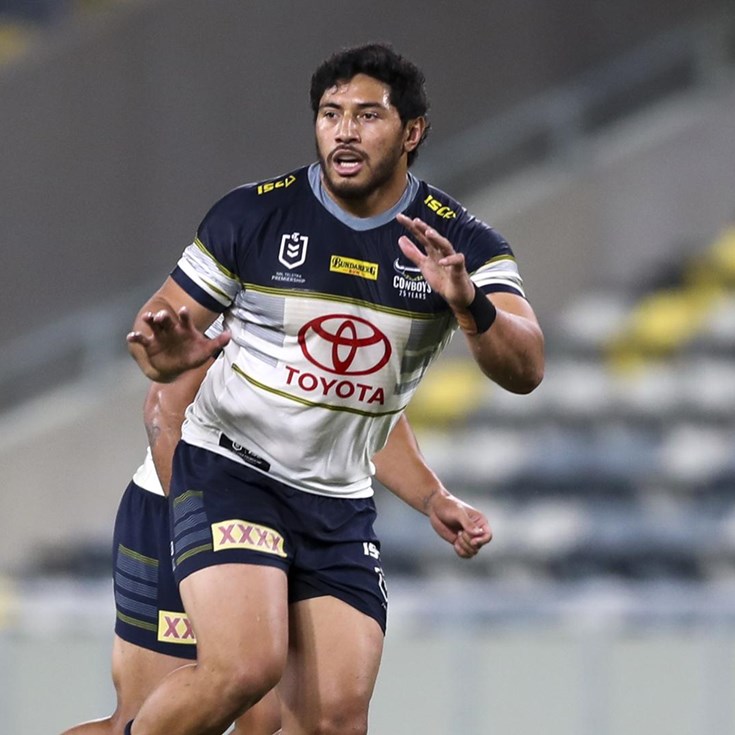