The Tigers will be kicking themselves after blowing a good chance to beat the Roosters a fortnight ago and failing to aim up last weekend against the Eels.

A few results in other games have fallen their way, but that only highlights the fact they could be in the top eight if not for missed opportunities.

They get another shot this week but they can expect a torrid time in the nation's capital.

The Raiders joined the Roosters on 22 points with last week's impressive road win over the Dragons and Ricky Stuart will be pushing hard to ensure there's no let-down on Saturday night.

Raiders: Iosia Soliola starts with Josh Papalii to come off the bench. Sam Williams and JJ Collins dropped off the extended bench on game day. Michael Oldfield comes into the centres to replace the suspended Nick Cotric. Royce Hunt and Jack Murchie were omitted from the extended squad 24 hours before kick-off.

Wests Tigers: Fullback Corey Thompson has been ruled out with an ankle injury he suffered against the Eels and captain Moses Mbye moves to the No.1 jersey. Michael Chee Kam moves from the bench to the centres and Luke Garner is the new man on the bench. Robert Jennings was dropped after the loss to the Eels his place on the wing is taken by Paul Momirovski. Rookie Tommy Talau and experienced Chris McQueen dropped off the reserves an hour before kick-off.

Benji Marshall will have to reach deep into his bag of tricks in his head to head clash with Blues Origin star Jack Wighton, while Robbie Farah will have to deliver in his duel with Raiders ace Josh Hodgson.

Ricky Stuart will have to find a replacement for Nick Cotric for a few weeks but he has been plugging gaps on the run all season and has the depth to fill virtually any hole in the backline. The Raiders have to dominate through their forwards and apply constant defensive pressure to Benji and Luke Brooks.

A good start is crucial against a side that has proven to be a good front-runner in 2019. The Tigers need to throw different attacking looks at the Raiders to keep them guessing defensively, while Maroons Origin rep Moses Mbye has to perform like a marquee player and take some of the pressure off Benji, Brooks and Farah.

Wests Tigers are playing tough but their attack is very dependent on what Marshall can come up with. The Raiders looked a lot better on Sunday night, they were amazing against the Dragons. With that performance they showed they’re one of the teams that can win the competition. Raiders by 12

Luke Brooks can't be accused of not running the ball enough. The Tigers halfback has engaged the line 134 times - tops in the NRL. Raiders fullback Charnze Nicoll-Klokstad has been better than everyone expected in his first season with the club, logging a league-leading 1,109 kick return metres.

Losses in their past two games aren't the only thing the Tigers have to forget about. When they hosted the Raiders in round 13 on June 7, the Tigers failed to fire a shot and were thrashed 28-0. Coach Michael Maguire has to get his team in a positive frame of mind if they are going to turn the tables on Saturday. 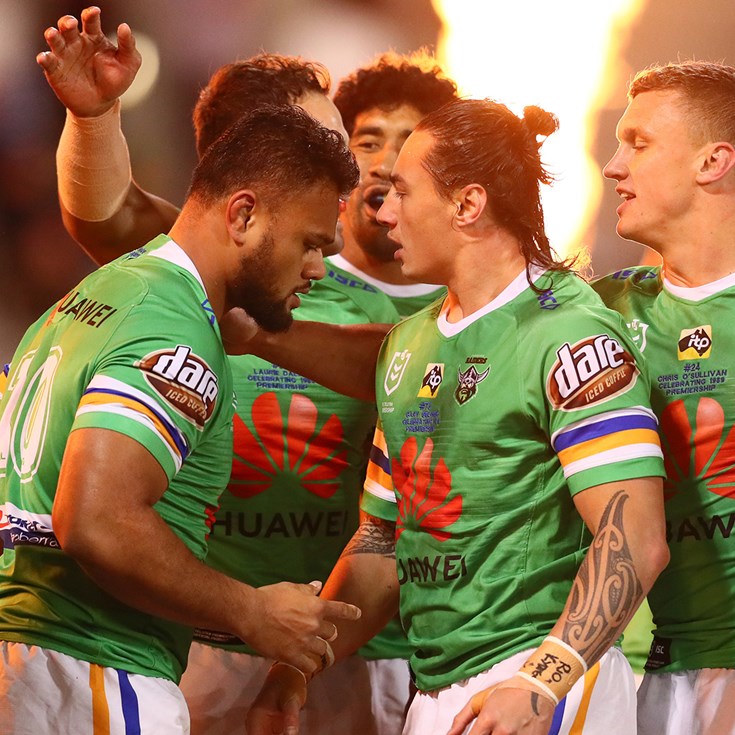