Daniel Saifiti will wait until the end of the year to savour his whirlwind State of Origin experience.

For now, he wants to help seventh-placed Newcastle arrest a mid-season slump and focus on playing in his first finals series.

Called into the NSW side as a replacement for injured Knights team-mate David Klemmer, Saifiti started the second and third games as the Blues levelled then won the annual interstate series.

The 23-year-old front-rower played 33 minutes in game two, running eight times for 100 metres and making 15 tackles as NSW monstered the Maroons 38-6 on a rainy night in Perth on June 23.

With Klemmer alongside him for games three in Sydney last Wednesday, Saifiti played the first 22 minutes. He made four runs for 32 metres and 14 tackles, then watched the rest of the game from the bench as NSW secured a 26-20 victory courtesy of James Tedesco’s last-minute converted try.

Reality bit when the Bulldogs shocked the Knights 20-14 at McDonald Jones Stadium just 48 hours after the thrilling Origin decider.

“I haven’t really had time to sit down and think about it,” Saifiti told reporters after rejoining his Newcastle team-mates at training on Wednesday.

“I played two days after it and came back to earth and had to focus on club footy, so it’s probably something I’ll reflect on at the end of the year. At the time, it went so quick, and I’m very grateful for the experience so I think I’ll be better off for it.

“Most of the boys said it was the biggest game they’ve ever played too – how big it was, a decider at home, and to get the win like that – and how we did it was pretty special.”

Saifiti, who has played 77 games since his NRL debut in 2016, gained invaluable experience playing with some of the game’s brightest stars and being mentored by a coaching staff led by former Origin greats Brad Fittler, Danny Buderus and Craig Fitzgibbon.

They were opportunities he never envisaged when he began the season on the bench behind Klemmer and fellow off-season recruits Tim Glasby and James Gavet.

“I didn’t think at the start of the year that I’d be playing Origin footy this year, that’s for sure,” he said.

“I’ve mixed it with the best now and obviously it’s the biggest stage in rugby league, State of Origin. I was happy with my game-two performance, and was pretty much a passenger in game three, so it is what it is and I’m just happy to be back in club land.

“Once you play Origin footy, and you see how fast the game is and you’re around all these greats... it’s about soaking up every moment. They taught me valuable lessons that I can take back to club land, that’s for sure.”

His Knights team-mates have ensured the giant Fijian international does not get too big for his boots.

“If anything, I can’t get away with anything these days. All the Origin star jokes, it’s getting old now, but it’s just the way we are – we’re very close at this club,” he laughed.

“The [NSW] boys were very nice but there’s nothing like home.

“All my best mates are in this team so to come back and share the banter... it just felt like I was home and I was glad to be back.”

After dropping three of their past four, including back-to-back losses to the Bulldogs and Warriors, the Knights face a test of character against the Roosters at the Sydney Cricket Ground on Saturday.

Saifiti expects the defending premiers to be stinging for revenge after the Knights thumped them 38-12 in Newcastle two months ago.

His performance against the Roosters pack, and an encore against the Burgess brothers a fortnight later when the Knights upset Souths 20-12, convinced Fittler he had the right stuff to play Origin.

“I feel like the whole year, I was pretty consistent, but having those two [games] definitely chucked my name in the ring and Freddy picked me, which I’m thankful for,” he said.

“They’ve probably got their best 17 back playing this week for the first time probably since the start of Origin, so it’s a big test for us, especially what we did to them last time...

“I feel like when you play against the best teams, they bring the best out of you … I know they’re definitely planning on finishing the year good, so it’s going to be a big test.

“We’ve got our full squad now, and we don’t have any distractions. I feel like once you start playing good, I think we won seven out of eight games... and you can quickly go back to that too. While the two losses are obviously disappointing, we’re not in panic mode or anything like that.” 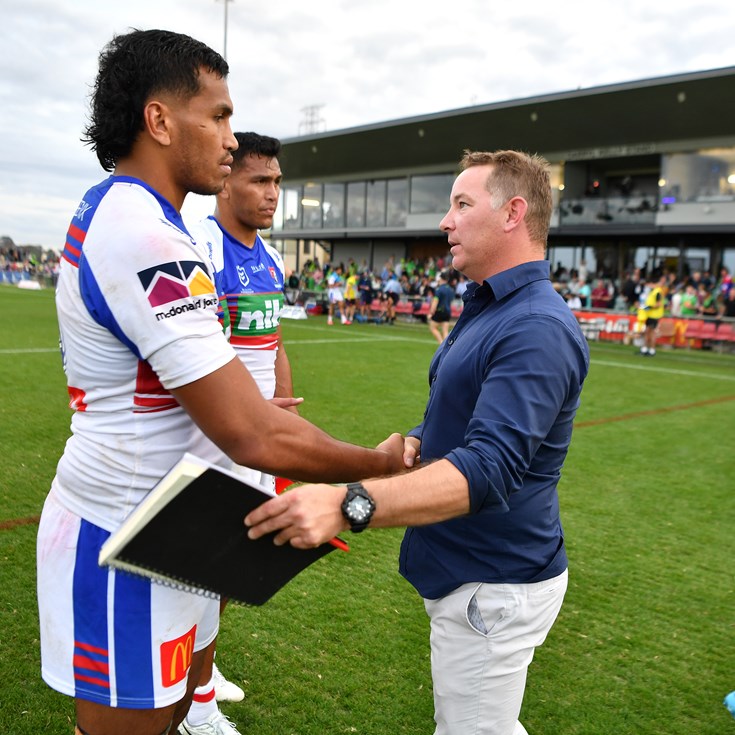