Brodie Croft and Cameron Smith have conspired to steer the Storm past a spirited Titans outfit but coach Craig Bellamy will anxiously await possible charges against Suliasi Vunivalu and Joe Stimson after both men were placed on report.

When Smith threw a pass that went to ground and led to a try for the opposition inside two minutes the Titans might have had cause to think it was going to be their day and given the week they have endured may have felt due some good luck.

Tries to Brenko Lee and Jarrod Wallace gave them a shock 12-0 lead after just eight minutes but it didn’t take a Storm team missing all but one of their Origin stars long to click back into gear.

They scored 16 unanswered points and led 22-18 at half-time before completing the demolition in the second term, racing away to win 38-18 in front of 11,143 people at Cbus Super Stadium.

Apart from an early completion rate that would have incensed Bellamy, the only negatives to come out of the win that maintains their lead at the top of the Telstra Premiership were incidents involving Vunivalu and Stimson.

Vunivalu was placed on report for a challenge on Titans winger Phillip Sami in the 42nd minute while Stimson could be the latest player sidelined for a late tackle after he was penalised for hitting Tyrone Roberts in the 63rd minute.

Titans senior coach Craig Hodges must have felt blessed by the rugby league gods when Smith threw one of the only misdirected passes in his 401-game career to gift Lee a try inside two minutes with the Wallace try following shortly after to put the Storm on the back foot.

Five minutes later amid a flood of early points the Storm restored a sense of normality when they scored back-to-back tries engineered superbly by halfback Croft.

With Maroons star Cameron Munster enjoying a weekend off, a Croft cut-out pass on the right gave Marion Seve the space to put Vunivalu over in the corner for his first try of the game.

Then, with the forwards rumbling downfield in the next set, Croft got on the outside of Bryce Cartwright before finding Stimson who scored under the posts to level the scores at 12-all after just 13 minutes.

A Nathan Peats 40/20 attempt that sailed out on the full gave the Storm the field position to launch another attacking raid, with a superb Jahrome Hughes cut-out pass putting Sandor Earl across for his first try in almost six years. His last came for the Raiders against Canterbury in round 23, 2013.

After failing miserably in his previous attempt Tyrone Roberts grubbered through the Storm defence close to the line seven minutes from half-time, Cartwright the beneficiary of a fortunate bounce that put the home side back in front.

Another soft penalty by the Titans gave the Storm a final crack of the first half and again it was Croft the architect of points, sliding through a kick into the in-goal for Vunivalu to win a race that was more with the dead ball line than any Titans players.

The procession of points continued in the second half but it was all one-way traffic, Hughes creating a try for Ryan Papenhuyzen with a clever kick in the 46th minute, Smith breaking a try-scoring drought of his own dating back more than a year and Justin Olam getting the second of his NRL career four minutes from full-time.

The Titans lost fullback AJ Brimson 25 minutes from full-time with a hip injury suffered in a heavy collision as he cleaned up a kick into the Gold Coast in-goal. 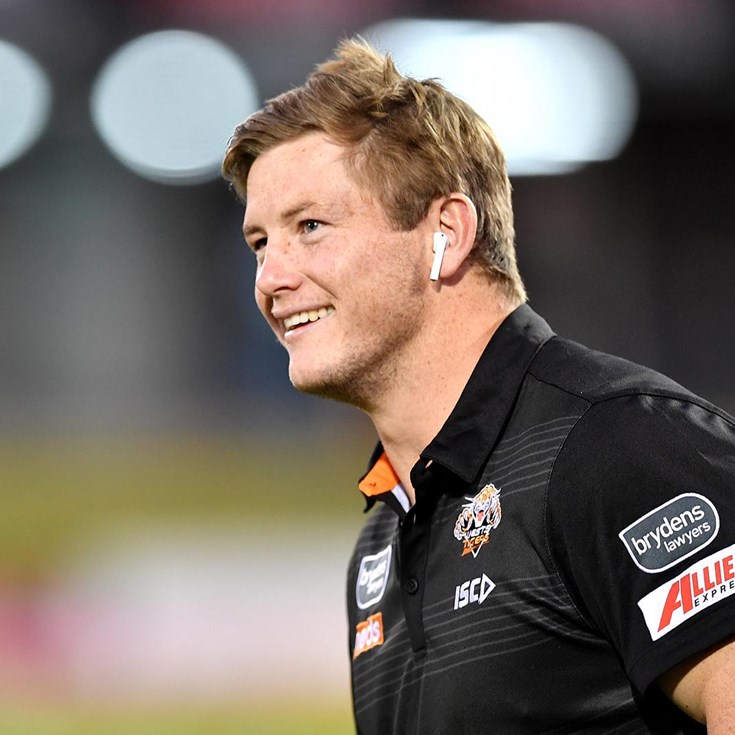 Master and apprentice: Grant to face Smith in battle of the nines

Stat Attack: Hynes picks up where Papenhuyzen left off

Experts' view: What should Cameron Smith do in 2021?