The Canberra Raiders powered to their biggest win of the year on Friday night, running riot to beat a woeful Warriors side 46-12 at Mount Smart Stadium.

Five first half tries, all of which were converted by captain Jarrod Croker, saw Canberra lead 30-0 at the break, and they never looked back.

Ricky Stuart's side completed all but five of their 37 sets and used their possession advantage to run for over 600 metres more than the Warriors.

Off the back of that hooker Josh Hodgson, playing in his 100th Telstra Premiership game, enjoyed a huge night at the office which included a try, more than 100 running metres and a pair of linebreak assists.

It was the Raiders' 13th win of the season and their fourth on the trot, and further enhances their chances of securing a top-four finish.

While the demoralising defeat doesn't mathematically rule the Warriors out of finals contention, any realistic hope of playing past round 26 now appears lost.

They could also be without five-eighth Kodi Nikorima for some time after he was forced from the field with an ankle injury after 20 minutes, while hooker Karl Lawton also left the game with a shoulder complaint.

The only real positive for the hosts was the performance of rookie Chanel Harris-Tavita, who replaced Nikorima and scored all 12 of their points via two tries and a pair of conversions.

In the opening 10 minutes Croker was denied tries twice by the NRL Bunker, but before long the four-pointers were flowing thick and fast for the Green Machine.

Canberra's two starting props were the first to go over, with Iosia Soliola powering through before Josh Papalii eased past Jazz Tevaga and Isaiah Papali'i to score.

Having enjoyed just 39 per cent possession by the midway point of the first half, the Warriors couldn't generate any momentum and hardly had a set inside their attacking 20.

Michael Oldfield got on the end of an Aidan Sezer grubber for the Raiders' third and just four minutes later former New Zealand rugby sevens rep Bailey Simonsson scooted down the left for another.

The fifth was one of the team tries of the year, with the ball changing hands six times through both passes and offloads before Joseph Tapine crossed.

The fact that the Warriors got through the first 13 minutes of the second half without leaking another try was cause for celebration in itself, and when Harris-Tavita scored and converted the Warriors finally had something to celebrate.

That joy would be short lived, though, as Simonsson embarrassed the hosts with a run which saw him break through four tackle attempts from five different players to score his second.

Harris-Tavita put himself in the right place at the right time to score again with nine to play, but by that stage a fair chunk of the 10,395-strong crowd had already left the stadium.

With less than a minute to play the Raiders had one more punch to deliver, and Jack Wighton made it look easy as he danced through from close range, gifting Soliola with a novelty shot at goal which he nailed to take his side's total out to 46. 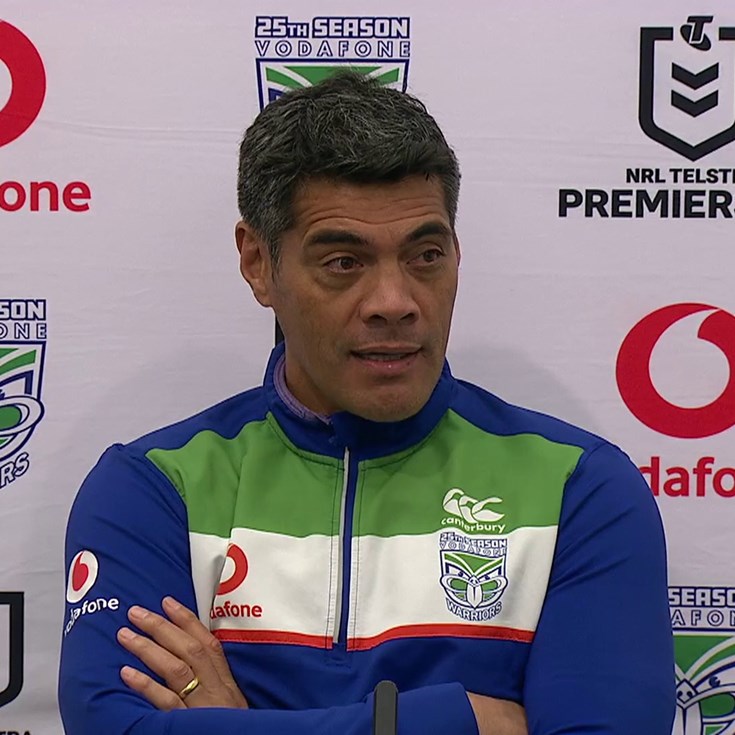 Simonsson scores on the left edge