Widdop laid on three tries and kicked six goals in just his third match back from a shoulder reconstruction as the Dragons ended a five game losing streak to move six points clear of the last-placed Titans, with four rounds of the Telstra Premiership remaining.

"I just said to Gaz that he was special. He was the difference between us winning and losing today," Dragons coach Paul McGregor said. "Other people put in some effort, but you need that touch of class and he delivered that again today in spades.

“While he is on the field he gives the team a fair chance of winning. He has only been back three weeks and we got beaten in the last 15 seconds by Souths, we had opportunities last week [against Parramatta] and we didn’t close them, and we got a win today.

“He’s been our best back for the last six years since he’s been at the club. Gareth is the type of player who just brings special things on game day like he did today and he just gives everyone around him that confidence."

The 40-28 win was not only a relief to St George Illawarra players and officials after last weekend having their finals hopes officially extinguished, but also because of the respect they have for Graham.

Vaughan and Frizell both scored tries, while second-rower Tariq Sims grabbed a double.

"I thought our forward pack today were very, very good," McGregor said. "Some of the metres the forwards got put us on the front foot and it was great.

"We want to enjoy tonight for James but we will buckle down on Monday and really come out and try to spoil a few sides to finish the year."

Centre Euan Aitken was also playing his 100th NRL match, while Gerringong Lions junior Jackson Ford made his debut from the interchange bench.

However, the day belonged to Graham and the Dragons showed their determination to ensure he celebrated his milestone with a strong defensive effort to start the match, which forced Gold Coast halfback Ryley Jacks to kick from inside his own half in just the second set.

The defensive pressure paid an early dividend when Vaughan pounced on a Corey Norman grubber kick to score near the posts in just the fifth minute and give the home side a 6-0 lead.

However, the Titans hit back 11 minutes later when Brian Kelly finished a spectacular passing movement, which started with Jacks and involved the Gold Coast halfback wrapping behind Sam Stone to tap on an offload for fullback AJ Brimson, who shuffled the ball to the unmarked centre.

Widdop helped his side to regain the lead when he sent Sims racing through a hole for his first try in the 20th minute and then grubbered into the in-goal for Tyson Frizell to score five minutes later.

Leading 18-6, the Dragons looked set to go on with the job when another strong defensive set forced Jacks to kick from inside his own 30 metres. But a try by Titans captain Kevin Proctor after a long range Brimson break kept the visitors in the game.

The second half started much the same as the first with Dragons interchange forward Luciano Leilua putting halfback Ben Hunt over in the 45th minute after bombing an earlier try when he burst into the clear and kicked ahead but the ball was claimed by Titans winger Jesse Arthars.

A spilled bomb by Dragons fullback Corey Norman gave Gold Coast a scoring opportunity and winger Phillip Sami finished one of the tries of the season after the Titans passed the ball through 10 sets of hands from one side of the field to the other.

When Sims strolled through the defence to score his second try in the 54th minute and Hunt put Aitken over with a long ball four minutes later, St George Illawarra fans in the 6,532 crowd were preparing to celebrate but the Titans weren’t finished.

Sami’s second try reduced the deficit to 36-22 in the 64th minute and when Jacks finished off another long range break by Brimson to score in the next set of tackles the game was wide open.

Widdop stopped another Gold Coast attacking raid with a one-on-one strip on Jacks and then ensured his side’s first win in six weeks with a perfectly placed grubber for teenage winger Jason Saab to score in the 79th minute.

"I thought our attack looked really good at times, when we had support around the ball and when we put on some decent shape we scored some nice tries," McGregor said.

"Defensively three of their five tries came from tap-ons and bat-ons and a ricochet off a kick but generally I thought our defence on the edges needed to be better than it was." 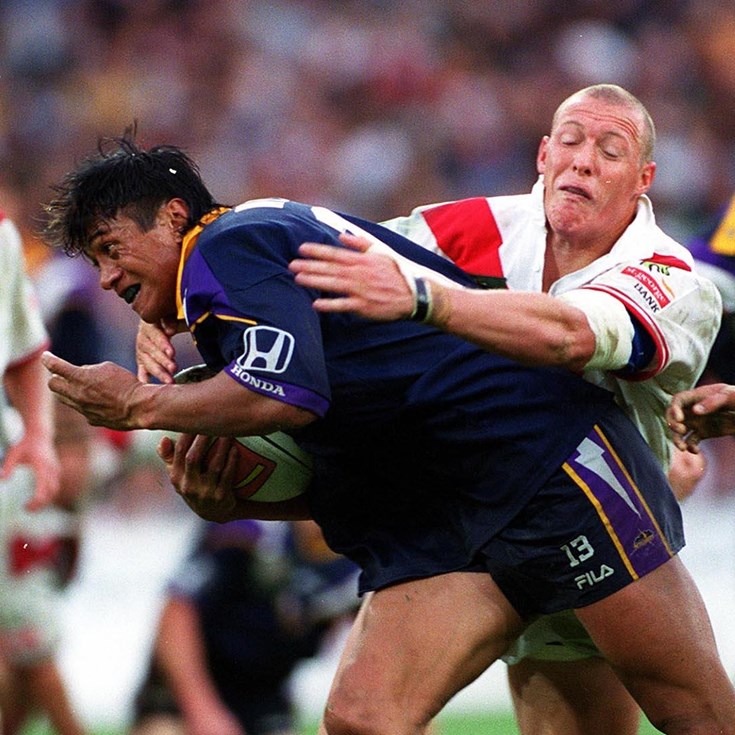