It's first versus last and the signs aren't good for the Titans, as the Storm look to atone for last week's surprise home loss to Canberra.

Melbourne were cruising to a statement-making win when they led 18-0 and watching them let it slip was akin to watching Tyson hit the canvas against Douglas.

It was their second loss on home turf in three weeks and it's the last thing Craig Bellamy wanted with a home final or two around the corner.

Unfortunately for the Titans the Storm will be out to vent some of their frustration on Sunday and it could get ugly very quickly.

Storm: Storm have reshuffled their spine with Brodie Croft omitted an hour before kick-off. That means fullback Jahrome Hughes now goes into the halves and No.17 Ryan Papenhuzen comes off the bench and into the No.1 position. On Saturday Storm announced Curtis Scott would be replacing Will Chambers (sprained ankle) in the centres and Tom Eisenhuth was being promoted to the bench for Joe Stimson. The Sunday changes mean Max King comes up from the reserves to the interchange bench. Brandon Smith is also returning from an ankle injury after missing last week's loss to the Raiders.

Titans: No changes to the initial 17-man team named on Tuesday. Jarrod Wallace is a welcome addition after missing last week's game for personal reasons, while Michael Gordon takes over at fullback and AJ Brimson moves to the bench. Jai Arrow has been named at prop and Nathan Peats at lock. An hour before kick-off Bryce Cartwright, in the No.18 jersey, earned a reprieve and was brought onto the bench from the reserves in place of Brenko Lee.

Brodie Croft and Ryley Jacks were vying for the same spot when they were teammates at the Storm. Croft ultimately emerged as Craig Bellamy's first-choice halfback and Jacks packed his bag for the Gold Coast. Jacks will be fired up to remind Bellamy of his talents.

Defence has to improve after they let the Raiders in for 22 unanswered points last week, as does the composure of some of their experienced campaigners. Bellamy will demand sharp attention to detail and won't accept any complacency, laziness or ill-discipline one week after watching his team invite the Raiders back into the contest.

Hands down it will be the upset of the season and one of the biggest in the last decade if they somehow produce a win. They will need to play a near-perfect game in attack and defence and hope the competition leaders are way off their game. If they can defy the odds and keep it close, maybe they can snatch it at the death.

I think the Storm, who gave up an 18-point lead and lost last week, will be seething. I think that is a nice, timely reminder for them a few weeks out form the semi-finals. They copped criticism for wrestling and tackling techniques, and I think they will respond. The Titans might be the team they respond against. I’d love to see some of the Titans forward – apart from Jai Arrow – stand up and help him out a bit. Storm by 18

Melbourne are the NRL's best team for returning kicks, gaining 4,513 metres - well ahead of the second-placed Roosters (4,183). The Storm are equal leaders with the Bulldogs for completions (80%).

The Titans stunned the Storm with two quick tries for an early 12-0 lead when they met in Round 18 on the Gold Coast. Melbourne soon hit back, but the home team hung tough to trail 22-18 at half-time. It was all Melbourne after the break, as Ryan Papenhuyzen, Cameron Smith and Justin Olam all scored in the second half to set up a 38-18 victory. 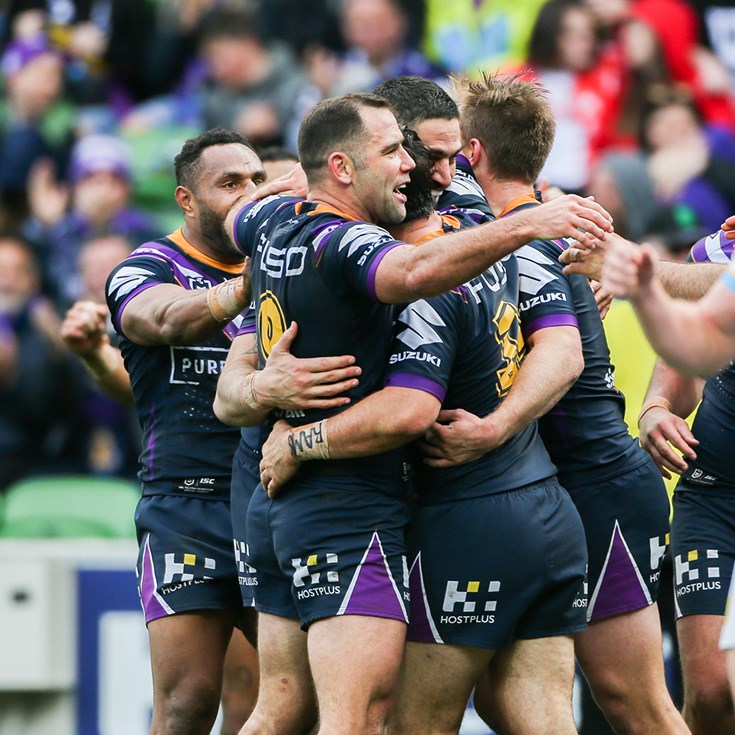 There goes the Flying Foxx

Papenhuyzen gets the lead back for Melbourne