It probably doesn't fall under the Thursday night blockbuster category but this game has a lot more appeal than it would have a month ago.

The Cowboys secured a morale-boosting win last week over the slumping Panthers, grabbing a little ray of sunshine in an otherwise gloomy season.

In the blue corner are the Bulldogs - winners of six of their past eight games, including the last four on the bounce.

They are among the hottest teams in the NRL and have come from nowhere to be within striking distance of a top-eight finish.

Cowboys: Paul Green has named the same 17 which played so impressively to upset Penrith last week. John Asiata and Michael Morgan will again call the shots in the halves with the skipper named at halfback this week after he was No.6 last week. Scott Bolton will play in jersey No.16 as Matt Scott's No.8 is retired for this game as a special tribute to the club legend. Tom Gilbert and Enari Tuala were trimmed from the reserves an hour before kick-off. Halfback Jake Clifford was named among the reserves and was hopeful of returning from an ankle injury but he was ruled out 24 hours before kick-off. The other man cut on Wednesday was Corey Jensen.

Bulldogs: Just the one change for the in-form Bulldogs with Jayden Okunbor coming onto the wing for the suspended Reimis Smith. Danny Fualalo and Morgan Harper dropped off the extended bench on game day. The first two omitted from the extended squad 24 hours before kick-off were Fa'amanu Brown and Ofahiki Ogden.

Michael Morgan had one of his best games of the season last week and will need to deliver something similar on Thursday against Lachlan Lewis if the Cowboys are going to tame the Dogs. Out wider, Jordan Kahu has to get the better of uncompromising centre Will Hopoate.

Last week they drew strength from team-mate Matt Scott's serious health scare and put together an inspired performance to overcome the Panthers. They need to arm themselves with the same intensity and will to win, and keep turning up defensively like they did with some try-saving tackles last week.

Now that they've defied the odds to give themselves a shot at a top eight finish, the Doggies should be suitably motivated to make it five straight wins. Their transformation into a top-notch defensive side is nothing short of remarkable and should hold them in good stead on Thursday. Kieran Foran is rejuvenated and will be looking forward to his clash with Morgan.

The Bulldogs have been a big story of late with some good wins but I still don’t know if they’ve got more than 12-16 points in them. Defensively they’ve been unbelievable. Josh Jackson was an inspirational leader for them last week. One thing that might go against them is that it’s North Queensland’s last game at 1300Smiles Stadium. We saw a lift from the Cowboys last week. This is a chance for Michael Morgan to stand up and be a leader. Cowboys by 4

The Bulldogs are fourth in the NRL in tackles made (7,712) and equal first in offloads (278). They are also equal-first with Melbourne for completions (80%).

The Cowboys will be out to avenge a 24-12 loss to the Bulldogs in round seven at ANZ Stadium. The visitors scored the game's first try but it was 6-6 at half-time and anyone's game. The Dogs grabbed the lead with Corey Harawira-Naera's 50th-minute try and never trailed again. Josh Jackson crossed before Harawira-Naera scored his second try for a 24-6 lead. Ben Hampton's try closed the gap but the Cowboys wouldn't score again. 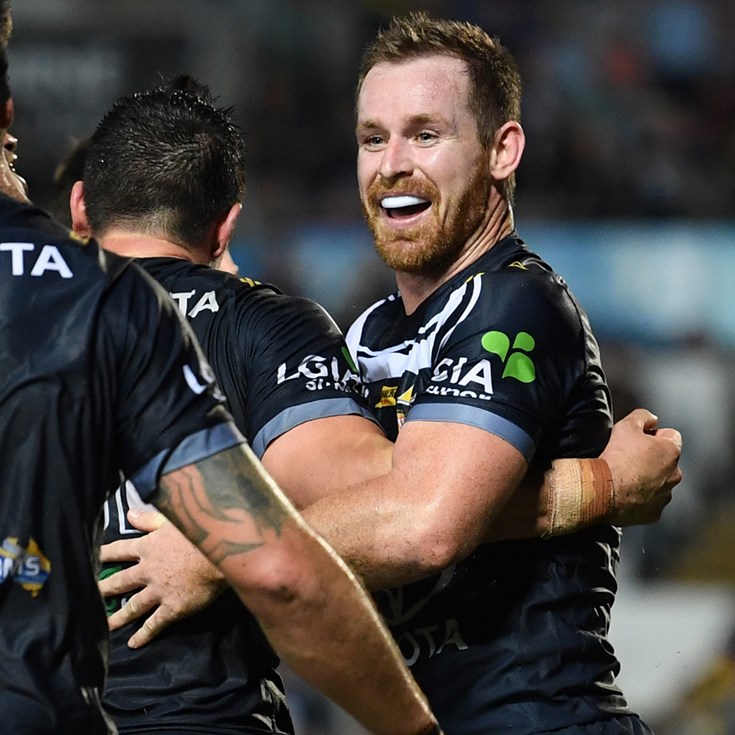 Kahu slots the field goal which gets Cowboys into the lead