Bulldogs captain Josh Jackson is yet to begin talks about a contract extension but after eight seasons and 180 games in blue and white he is determined to remain a one-club man.

The 28-year-old is signed to Canterbury until end of 2020 but rivals can make formal approaches from November 1 and there is sure to be interest in the fierce competitor who gets through 37 tackles a game and never fails to lead by example.

He intends to begin negotiations with the club once their 2019 campaign ends with Saturday's clash against Brisbane at ANZ Stadium but even if he were to go on the open market and test the waters, the nine-time Blues Origin rep insisted his heart lies at Belmore.

"I haven't spoken to any other clubs – I haven't really even started speaking to the [Bulldogs] yet," Jackson told NRL.com.

"I spoke to Hilly [Canterbury CEO Andrew Hill] a couple weeks ago and we both agreed that we'd wait till the end of the season to start anything. Hopefully we can sort something out in the pre-season.

"I'd love to finish my career here. I love the club and I'd love to win a premiership with this club. That'd be the ideal situation, so we'll wait till the end of the season and sort it out then."

Jackson's leadership has been heralded over the past two months, with the Bulldogs winning six of their past nine matches in tenacious style.

Though they won't be playing finals, Jackson expressed his satisfaction at how the team rallied in the second half of the year.

"I'm really proud, mate. We'd love another month [to push for the finals] but unfortunately that's just not the way it is," he said.

"I'm just proud of the efforts. Obviously a little bit disappointed in the start of the year still but if you look back you can get really frustrated.

"I'm just really happy with the way we've finished the season and hopefully we can do the same thing on Saturday and put in a really good performance for the fans."

In typically modest fashion, Jackson deflected praise for his captaincy onto a swathe of senior players.

"We've got a lot of guys with a lot of experience and those guys have been fantastic throughout the year."

Bulldogs coach Dean Pay has continually stated the club's mission is to become a top-four team in the near future. Critics would have laughed at the beginning of the season but Jackson reckons Canterbury are close to achieving that goal.

"I don't think we're very far away at all – I think our performances in the last eight weeks have really shown that," he said.

"We've played some pretty tough teams and some teams that I think will go pretty deep into the semis and we put in really good performances against them.

"That just helps the playing squad here believe we can really match it with the top sides."

Five-eighth Kieran Foran reiterated his desire to stay at the club beyond 2020 and said a luckless trot with injuries has only increased his passion for the Bulldogs.

"I love the game, I'm enjoying playing every week which is the key," the fit-again 29-year-old said.

"For however long I'm enjoying the game and I'm playing well then I want to be a part of it … It's been a tough, challenging couple of years since I've come here but that's definitely brought me closer to the joint." 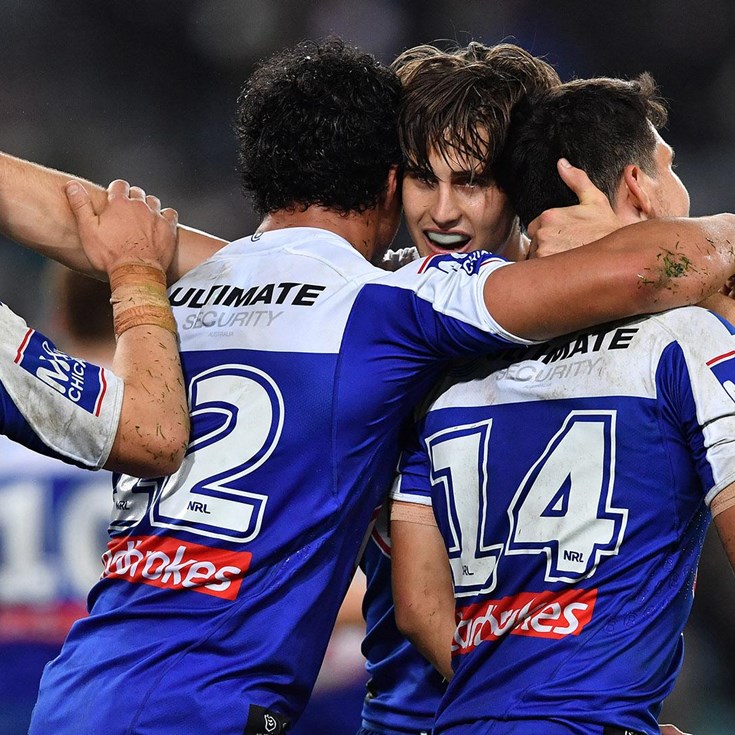 Boyd picks off Keating at the back

Bulldogs happy to play on