Kristian Woolf said it was impossible to say how much the coaching turmoil at the Knights towards the end of the season affected them in Sunday's 44-point drubbing at the hands of Penrith.

The nine tries-to-two defeat – the 54-10 result being Panthers' biggest win of the season – was not the best welcome mat for incoming Knights coach Adam O'Brien.

The question was how much of that heavy loss was collateral damage from coach Nathan Brown's abrupt departure a couple of week ago.

"When you've got disruption in a footy club then it affects performances – no doubt about that," Kristian Woolf said.

"When footy clubs are unsettled, you don't perform – that's been proven plenty of times over a number of years and clubs.

"But that still doesn't give us any reason for what we tossed out tonight. We just weren't committed for a game of footy tonight unfortunately."

Can O'Brien reignite commitment in his Knights squad when the 2020 pre-season starts in November?

"Well, it hasn't been a problem all year," Woolf said, referring to the nice mid-season run of seven wins in eight games.

"We've shown periods where we've been really committed and really good. So being consistent is obviously a challenge."

The Knights' first game under Woolf produced a 38-4 win over the Titans last weekend.

The second produced 44 missed tackles; only one Knights player in the back five ran over 100 metres (compared with four from five in the Panthers' line-up); and there were only 20 tackle breaks compared with 43 by the Panthers.

So defence was clearly an issue at Panthers Stadium on Sunday for the visitors.

"We let in 50-something points … defence is where you show your commitment to each other and it was pretty obvious early, when we were in the contest, that they were hitting harder than we were and they were getting off their line harder than us," Woolf said.

The Knights did hold their own for 20 minutes and scored the first try. They were only trailing 18-10 at the 50-minute mark before an explosion of Panthers points in the final half-hour of the game.

"Once things became tough we weren't really committed to each other," Woolf said.

"At the back end of the year we haven't really been committed. And I can't quite put my finger on that or if anyone at the club can, otherwise we would have fixed it by now.

"Our new coach comes in next year and obviously there's plenty to improve on." 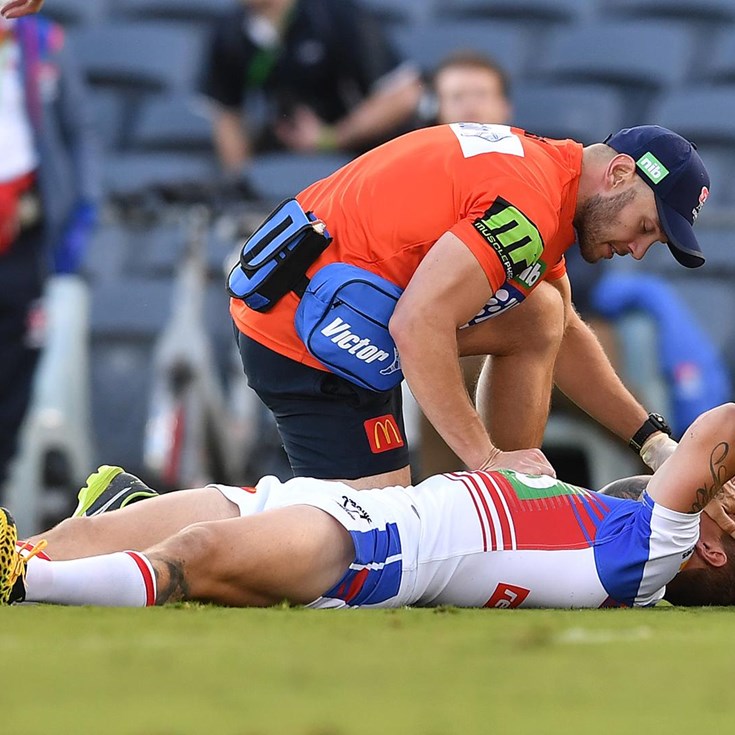 Pearce may not play against the Raiders

Hymel backs the new kid on the block